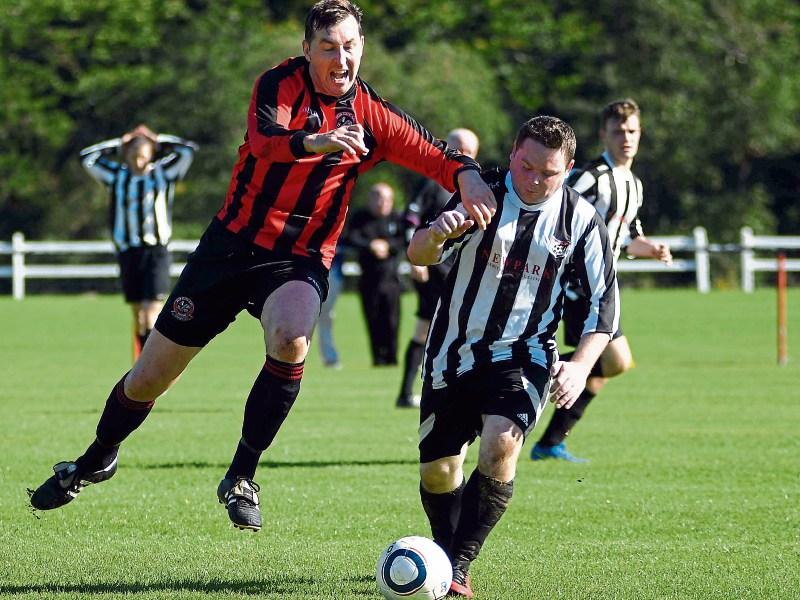 Deen Celtic showed no signs of rust as they blew away the cobwebs with a five-star show against Newpark on Sunday.

On a morning where The Prince grounds basked in glorious sunshine, everything that could do right did just that for the ’Comer men, who moved to the top of the Division One table in style.

Granted, it is still very early in the season yet, but if Celtic can maintain this form they will go some way towards achieving their long-term goal - a return to the Premier Division.

It had been five weeks since their opening game of the league campaign, but there was no need for them to ease their way into the game - far from it!

It took the hosts little over 90 seconds to force their way in front. Both sides fizzed into action on a glorious morning, but it was Celtic who did the damage first. Strong link-up play between John Doheny and Peter McPhillips sent the latter haring away down the left. Using his pace, McPhillips dashed along the sideline before curling a low ball across the box. Richie Lynch read the delivery, arriving just in time to sidefoot home at the back post.

Newpark were no slouches either; in Ian and Pa Clifford they had pace in their side. They also had trickery from Trevor Kelly, who almost fashioned a quick reply for the city side.

Working his way into space in the left corner he managed to squeeze a dangerous low ball across the goalmouth. John Dumecz slid in, but was a whisker away from making the connection.

Jolted into action, Deen Celtic didn’t hang about. They stormed forward again and, within a matter of minutes, found a way to double their lead.

This time they changed flanks, Michael McDonald scorching the Newpark defence with a searing run down the right. His pace took him beyond a number of players before his low accurate cross picked out the incoming Robert Brennan, who calmly steered the ball past netminder Garry Gleeson.

Now two goals up after 11 minutes, Deen Celtic were cruising – but they didn’t let up just yet. Within two minutes they had a chance to all but make the points safe when Richie Lynch was sent crashing in the box.

Newpark were a little unfortunate, as the chance came from one of their attacks – Trevor Kelly’s attempted pass pinged off a Celtic midfielder and looped into Lynch’s path. Lynch wasn’t about to overlook the gift though, getting up to coolly slot his penalty into the left side of the net.

Celtic eased off the gas a little after that, but while their pace wasn’t as relentless their performance was. They continued to string quick passes together, working the ball out of trouble with lovely one-touch moves that stretched Newpark and had them working hard to win possession.

The hosts did have a chance to add to their lead in the dying seconds of the half, when Michael Moran’s clearing header saw them turn defence into attack. In a flash, Brennan and Doheny teamed up to work the ball on to Richie Lynch. He unleashed a powerful first-time shot, but Gleeson did well to take the sting out of the ball before comfortably collecting it.

Both sides made a number of changes during the second half, something which affected the game’s tempo, but when Deen wanted to pick things up again they found more joy.

Again, it was their speedy one-touch play which caused all the problems. Full-back Darragh Stone started the move, stepping up to half-way before working the ball to Richie Lynch. A clever flick was headed on by Jason Carroll towards the box, where Michael McDonald raced in, but his 65th minute shot was saved, Gleeson getting down and using his legs to make the block.

It had been anything but a good day for Newpark, but they did give their hosts a little scare soon after. John Dumecz found space on the right to dig out a teasing 77th minute cross.

The ball was destined for the head of Pa Clifford, who steamed in unmarked at the far post, but Robbie Lynch managed to backpedal far enough to get his fingertips to the ball and take it away from the Newpark winger.

That was the exception more than the norm for Newpark though. Within minutes they were on the back-foot again, as Deen Celtic turned the screw. Johnny Dowling was the provider, firing a menacing free across the box towards the back post where Eddie Brennan’s powerful header had too much pace for Gleeson to keep out.

Four became five in stoppage time as Deen completed a good day at the office. Again Dowling was the provider, finding room in the box to feed sub Mark Delaney to unleash a venomous strike that rocketed into the top right corner.

Early days for Deen perhaps, but after a start like that who knows where the league season will take them?