Brace of Group One successes keeps O'Brien in winning mood 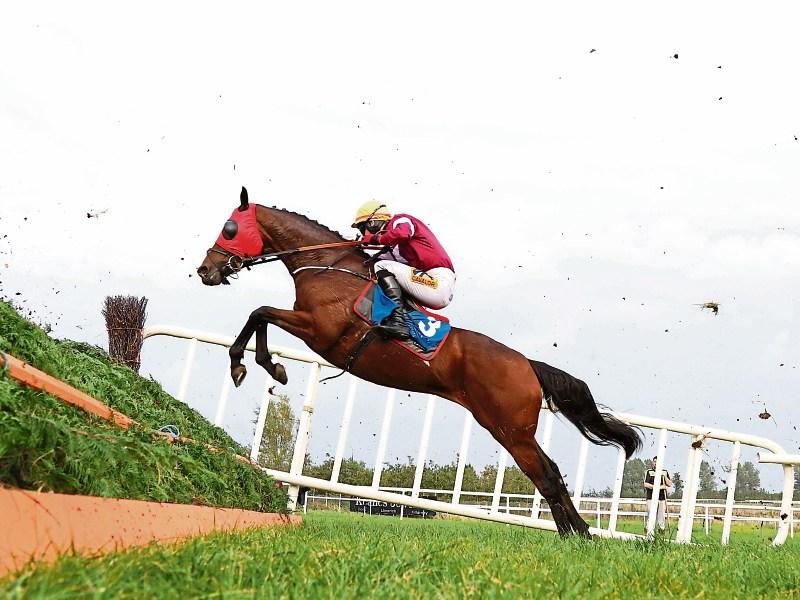 ON A ROLL - Tiger Roll and Donagh Meyler get ready to clear another fence on their way to victory in the J.T. McNamara Ladbrokes Munster National Handicap Chase at Limerick.

Fresh from his remarkable feat of saddling the 1-2-3 in the Prix de l’Arc de Triomphe at Chantilly, Aidan O’Brien had another weekend to remember.

The winning continued for O’Brien when he travelled to Newmarket and notched up another pair of Group 1 victories.

On Friday, Rhododendron stamped her class on the Dubai Fillies Mile by running out a decisive 2¼ length winner from stable companion Hydrangea in the hands of Ryan Moore.

The 5/2 joint favourite is now clear favourite for the English 1000 Guineas back at Newmarket next May and on this display she will take all the beating.

Twenty-four hours later the O’Brien juggernaut rolled on. Churchill strengthened his claim as the best juvenile in Europe by landing the Dubai Dewhurst Stakes in good style.

The 8/11 favourite had to be rousted along by Ryan Moore with over two furlongs to race but he was well on top in the final furlong as he defeated stable companion Lancaster Bomber (66/1) by a length and a quarter.

This was Aidan O’Brien’s fifth Dewhurst Stakes success - not surprisingly, Churchill is now a solid favourite for next year’s English 2000 Guineas. O’Brien has now saddled 20 Group 1 victories worldwide in 2016 and could well be on course to break the record of 25, which was set by American trainer Bobby Frankel.

With British Champions Day at Ascot on Saturday, hopes are high that another couple of top level victories could be on the cards for the Master of Ballydoyle.

Mullins in a Spin!

For the second consecutive year, trainer Willie Mullins landed the featured Irish Cesarewitch Handicap at the Curragh on Sunday when Laws Of Spin made the most of his light weight to score under Chris Hayes.

The 7/1 winner was always in the leading group and did well to fend off the late challenge of Cradle Mountain (14/1) to win by a length and a quarter with Swamp Fox back in third place.

On what was a good day for English stables, the Eimer Hannon Waterford Testimonial Stakes (Listed) was won by the Charles Hills trained Shanghai Glory (14/1) under a strong drive from William Buick. An hour later it was the turn of the Charlie Appleby-trained Calare (8/1) to take the Staffordstown Stud Stakes (Listed) in the hands of James Doyle.

Calare carried the famous royal blue colours of Godolphin, who had earlier witnessed another victory when their juvenile Historic Approach (4/1), trained by Jim Bolger and ridden by Kevin Manning, arrived late and fast to take the opening two-year-old maiden in the style of a nice prospect.

Local trainer Ger O’Leary was on the mark when Primo Uomo (5/1) wore down the front running Accalia to win the Irish Times Handicap over five furlongs while another Curragh trainer on the mark was Johnny Levins who saddled Bainne (12/1) to take the Apprentice Handicap over eight furlongs under a patient ride from the talented Oisin Orr.

Trainer Dermot Weld and jockey Pat Smullen have enjoyed a fine season at the Curragh in 2016 and they rounded off the day with another success for the consistent Almeela (11/4) who finished strongly to touch off Soul Searcher in the Brown Panther Stakes (Listed) over 12 furlongs.

The 1/1 favourite Stellar Mass finishing a disappointing last of the seven runners.

Tiger on a Roll

Although he won the 2014 Triumph Hurdle at the Cheltenham Festival, the intervening period has been something of a let-down for the Gordon Elliott trained Tiger Roll. However, he produced a fine performance to land the JT McNamara Munster National at Limerick on Sunday.

Sent off at 20/1, the Donagh Meyler-ridden six-year-old travelled well throughout and kept on strongly in the straight to defeat Stellar Notion by 7 lengths with Kylecrue another 3¼ lengths away in third place.

This was the second big handicap chase win of 2016 for Meyler, who partnered Lord Scoundrel to success for the same trainer and owner in the Galway Plate in late July. Elliott had earlier sent out Missy Tata to justify odds of 1/6 favouritism in the opening three-runner four-year-old winners hurdle and then revealed that she will be sent over fences in the next couple of weeks.

The Peter Fahey trained Peregrine Run has really improved this season and recorded his third victory in a row when just getting the better of Screaming Rose in the listed Dunraven Arms Hotel Novice Hurdle under Roger Loughran. The 7/2 winner is now a possible for the Cheltenham November Meeting on the back of this fine display.

Davy Russell continued his fine run of form when partnering Crystal Pearl (7/2) to a convincing success in the Mares H’cap Hurdle for local trainer Charles Byrnes, while Michael Hourigan was also on the mark as his charge Undressed (14/1) came from well off the pace to take the concluding beginners chase in the hands of Mikey Fogarty.

The second 20/1 winner on the day was the Eric McNamara trained Irish Bulletin who landed the 2m 6f H’cap Hurdle under a fine ride from Mark Walsh.

The best jumping display on the day came from Sub Lieutenant (1/1 fav) in the Rated Chase. Henry de Bromhead’s charge never touched a twig on his way to a comfortable success under David Mullins.

Round Two bounces back

Without a win since taking the Marble Hill Stakes at the Curragh in May 2015, Jim Bolger’s Round Two bounced back to winning ways in the featured McMahon’s Munster Mile Handicap at Limerick on Saturday afternoon.

Having suffered an injury when favourite for the Coventry Stakes at Royal Ascot last year, Round Two (8/1) had shown very little in his three starts this season but the drop in grade seemed to do the trick as he came home strongly to defeat The Moore Factor in a tight finish.

Michael Halford was the man to follow in Dundalk on Friday night. He recorded a treble at the all-weather venue, with the victory of Ambassadorial in the featured EBF Star Appeal Stakes the highlight.

Winner of his only previous start at the same course in September, Ambassadorial (4/1) was patiently ridden by Shane Foley and arrived to strike the front over a furlong out.

Halford also had the distinction of saddling the 1-2-3 in the Irish Stallion Farms EBF Fillies Handicap with Kadra (5/1), ridden by Pat Smullen, leading home stable companions Indrahar and Suvenna. The treble was completed when Reddot Express (2/1 fav) made all the running to win the second division of the eight furlong handicap under Conor McGovern.

Aidan O’Brien’s Taj Mahal (9/4 fav) had been a bit frustrating to follow in maiden races, but he finally got things right to win the 7f Nursery Handicap under Donnacha O’Brien.

The night ended with a memorable success for young apprentice Danny Sheehy in the concluding 12 furlong handicap as he partnered Adrian Keatley’s Rahyah (8/1) to a fine victory. Danny is the son of trainer Eamon ‘Dusty’ Sheehy and this was his first winner on the racetrack having enjoyed a successful career on the pony racing circuit.