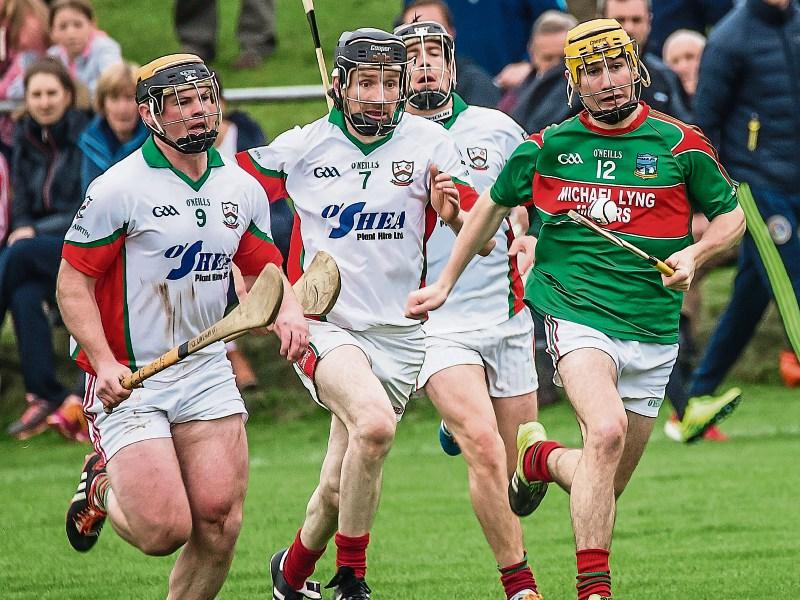 Richie Leahy gets away from Ollie Walsh (9) and Michael Morrissey (7). Photo: Pat Moore

The Rower-Inistioge looked well balanced and driven when they sauntered into the senior hurling championship semi-finals, beating St Martin's by 2-19 to 0-12.

The Southerners were troubled only mildly by toothless St Martin’s in a quarter-final clash in Bennettsbridge on Saturday that never really amounted to much in terms of a contest.

The simple reason was that the Rower were too good for opposition that was limited up front. The Martin’s attacked registered only twice from play!

Against that, however, huge credit must be given to the winners defence, which was outstanding.

With the powerfully built Sean Cummins returning at full-back after being laid low for three weeks by septicaemia, manager Brendan Fennelly and his selectors had the opportunity to reorganise their backs. Cummins was a rock at No. 3, and the placings around him worked very well.

And the attack, apart from registering nine wides in the second half, performed well with Richie Leahy showing real flair; Pat Lyng being hugely effective thanks to a magnificent work-rate; Tom Murphy on song too and Darragh Joyce clinical on frees.

It all added up to an impressive showing by the Rower, who gave a display of point scoring during the closing quarter when they out-shot the opposition by 0-9 to 0-1

Martin’s laboured during the closing 10 minutes especially having been reduced to 14 men after busy midfielder, Ollie Walsh was sent off.

The winners enjoyed the lift of a good start after grabbing a goal in the third minute from a penalty. Darragh Joyce took the honours after the scorer and Tom Murphy combined to rip open the Martin’s defence before the latter was fouled.

Martin’s most productive scorer early on was goalie, Colin McGrath, who registered twice from long range frees. When John Maher added a third from a free (1-1 to 0-3) the prospects of a humdinger looked reasonable.

With conditions perfect for hurling, the Rower were moving nicely but they were conceding too many frees - 6 in the opening quarter - for their own good.

Martin’s caught up in the 16th minute when a foul on John Mulhall earned goalie McGrath his third point (1-3 to 0-6).

Richie Leahy fielded the puck-out before shooting the Rower ahead immediately afterwards, and they led all the way home from there.

Joyce and Maher traded frees before Conor Joyce landed a might one under severe pressure. That was followed by a well taken goal by Tom Murphy, who was patient with his finish. That helped fire the winners into an interval lead of 2-9 to 0-7.

The winners defence had done its job - not one score had been conceded from play.

Martin’s shaded the returns 4-1 during the next quarter thanks to scores from John Maher (two frees), John Mulhall and sub Robert Reid.

While they huffed and puffed a lot, they just couldn’t transfer out field effort on to the scoreboard.

When Richie Leahy showed lovely stick work to create and take the Rower’s next point (2-11 to 0-11) he clicked the team into real action.

Their hurling was relaxed and sure afterwards, and they walked away from the opposition.