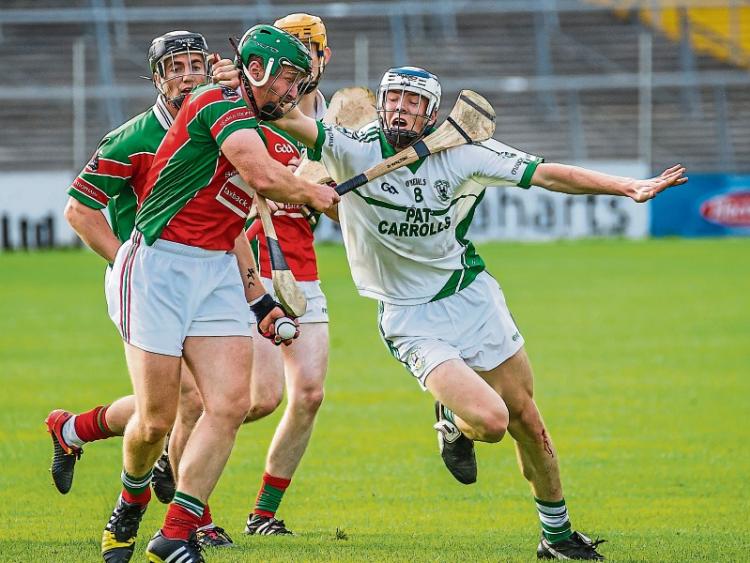 James Stephens lost their way when they should have been making hay, and concessions just on the rest killed them.

That was the somewhat twisted tale when O’Loughlin Gaels charged through to the senior hurling championship semi-finals in Nowlan Park on Sunday, winning by 1-16 to 0-14.

No doubt, The Village were the better team during most of the opening period. Young Luke Scanlon was the liveliest contender in an attack that promised more than it delivered, but yet they had the unsure Gaels stretched.

The winners trailed by 0-2 to 0-5 after 12 minutes. The story was in the free count; 6-1 against O’Loughlin’s who were being pressured all over the park.

However, ’Stephens were missing chances. They shot five wides by the 18th minute, and they were made pay for that.

O’Loughlin’s caught up at 0-5 each thanks to scores from Sammy Johnston and Mark Kelly, with an assist by the hard going Eoghan Grant.

At least this bit of a burst helped O’Loughlin’s find their way, and an attack that had been virtually starved of possession was now seeing a bit more of the ball.

Four points were shared equally, which left nothing in it passing the 29 minute mark.

Then a double scoring blast by the Gaels blew them into a position of control.

First Sammy Johnston clipped a ball to the net after it broke near the right edge of the square at the city end following a long free from goalie, Stephen Murphy.

And in lost time Martin Comerford fired over a very good point from virtually on the left sideline to leave O’Loughlin’s leaders by 1-8 to 0-7 at half-time.

Those quick gains fortified the St John’s Park crew for the rest of the contest, and their general hurling improved afterwards.

’Stephens gave strong chase afterwards after opening the second half with a point from David Walton following a delivery from the deep lying Eoin Larkin.

The reeling in of O’Loughlin’s wasn’t easy. They never actually did it, but they got close in the 49th minute when Walton set up Donnacha Cody for a point which left the minimum in it (1-11 to 0-13).

The Gaels were feeling the pressure. Their last few visitors towards The Village goal were beaten off.

They were relieved when Mark Bergin took a back pass from Martin Comerford virtually on the right sideline before shooting over from 30 metres in the 51st minute (1-12 to 0-13).

That score steadied the nerves. A rash foul on Sean Bolger gifted Bergin the next point, and even if Walton replied at the other end, there was much more intent in the winners play now and they were better able to cope with such a loss.

Mark Kelly won the puck-out and rifled a lovely point over the bar. He landed a like score shortly afterwards when placed by Martin Comerford, and with time almost up, that finished the season on ’Stephens.

Overall it was hard to know what to make of O’Loughlin’s. When at their best they looked more than decent, but it took them a while to get into the game, which is something they will have to guard against in the semi-finals.

Their heroes here were Andy Kearns, who was soundness personified at full-back, Brian Hogan, Mark Kelly, Alan Geoghegan, until he tired, the hard trying Eoghan Grant but especially Paddy Deegan, who was the best player on view.