Early days, but Highview show they're ready to go the distance 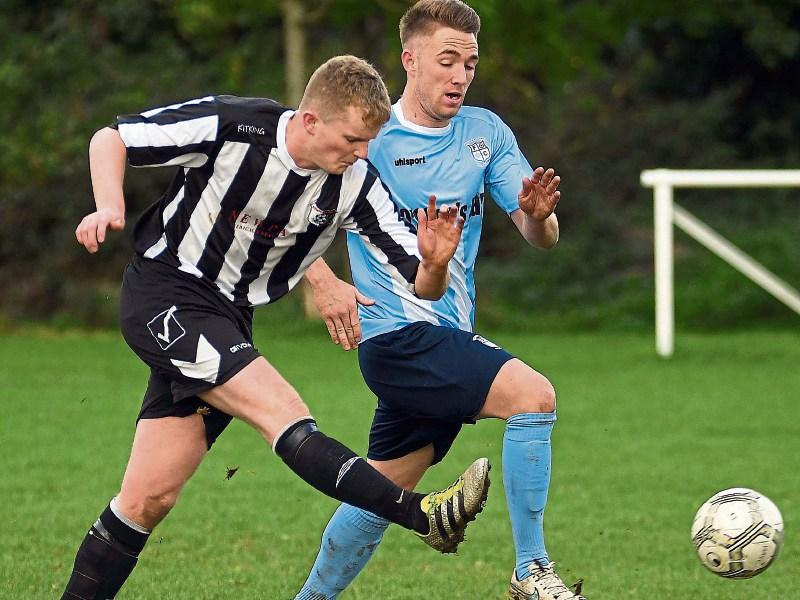 Gary Gleeson (Newpark) gets his shot away despite the attention of Dean Broaders (Highview Athletic A) during their Division One game. Photo: Michael Brophy

A good start may be half the battle, but Highview Athletic showed they are ready to go the distance in the race for the Division One title.

The Graignamanagh side sounded out a warning of their intentions for the season when beating Bridge United 6-2 in their opening game of the campaign and reinforced it with a solid display against Newpark.

A week after hitting five goals in the Leinster Junior Cup, Athletic delivered another goal blitz as they put six past the city side.

And just like that day in Goresbridge, victory came with another emphatic performance - but not before getting a real fright!

Any idea that Highview had of starting at their own pace was swiftly wiped away as Newpark nearly took a stunning lead. John Dumecz almost gave the home side the perfect start with he powered a fifth minute free past the Athletic defence, but the ball thundered back off the far post.

Newpark were buoyed up by that chance and went close again to breaking the deadlock two minutes later. Pa Clifford breached the defence with a brilliant ball that Trevor Kelly seemed destined to finish, but Graham O’Neill hooked the ball to safety.

Highview ramped up the pace after that, working the ball around at speed until they could find the perfect opening. It duly arrived in the 13th minute, giving Dean Broaders room to make a great run down the left. A quick cross flashed across the box, just beyond its intended target of David Dunne, but Seamus Kavanagh followed in to add a composed finish at the back post.

Broaders and Kavanagh made such a good combination it was no surprise to see them team up again for Highview’s second just five minutes later. There was an element of good fortune about the build-up, as Broaders’ excellent diagonal ball took a wicked bounce and wrong-footed the Newpark defence, but there was nothing fortuitous about the finish, Kavanagh racing in from the right to tuck the ball home.

Newpark were on the rack at that stage - it took a brave block from Dumecz to deny Broaders a goal within 60 seconds - but they showed they still possessed a threat of their own. Ian Clifford intercepted a short kick-out and slipped the ball through to Pa Clifford, who beat Shane Kavanagh with his 25th minute shot, but Murty Broaders got back to clear the ball off the line.

Newpark kept looking for a way back into the game, but their next chance ended with Highview extending their lead. Trevor Kelly brought a great save from Kavanagh who, in a flash, turned defence into attack. He quickly released the ball to Jordan Brett, who raced away before playing David Dunne through, but before he could shoot he was upended by netminder Marco Sousa.

Dean Broaders hammered home the resulting penalty, confidently firing it high to the left to leave Highview three goals to the good by the break.

Things didn’t get much better for Newpark after the restart, as it took Highview seven minutes more to surge even further in front. Chris Kielthy was the architect, bursting forward before releasing the ball to David Dunne. His shot was stopped by Sousa but Newpark didn’t escape, Murty Broaders following up to steer the ball home for his side’s fourth goal.

The game was more or less done and dusted by the hour mark, but Newpark were determined not to go down without a fight. Ian Clifford pinged a menacing cross into the box, but the ball flashed across the goalmouth. Christy Drennan did well to recycle play, forcing it back into the mix where Clifford pounced to head home.

The goal was just what Newpark deserved for the way they continued to battle, but that was as close as they’d get to their rivals as Highview slammed the doors shut on a comeback.

Within three minutes of conceding, Highview restored their three-goal cushion. Kielthy, now in midfield role, intercepted a Newpark kick-out and pushed the ball forward. Dean Broaders timed his run to perfection, hammering an unstoppable shot into the top right corner.

Highview were denied a sixth by a fine save from Sousa, who dived low to his left to keep out Kielthy’s 80th minute strike, but they still had time to reach the half-dozen. Dean Broaders grabbed it, completing his hat-trick when he gathered Jordan Brett’s 90th minute pass and tucked it away.