Fortune favours clubs on their travels! 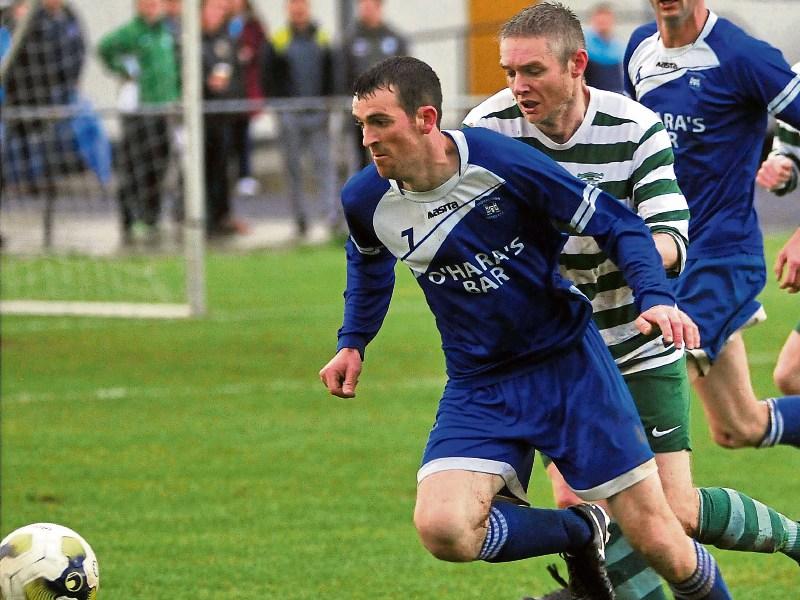 Michael O'Neill created one goal and scored another as Thomastown United came from two down to beat Wicklow Town in the Leinster Senior Cup.

Kilkenny clubs were three for three when they ventured out of the county for provincial and national action at the weekend.

Pride of place went to Thomastown United, who showed incredible powers of recovery as they advanced in the Leinster Senior Cup.

Drawn away to Wicklow Town, United’s trip to the Garden of Ireland looked to be anything but rosy as they trailed 2-0 inside the first half, Ian Brannigan and Gareth Murphy shooting Wicklow into a commanding lead inside half an hour.

United were faced with an uphill task, but took it on with relish. Marty Lawrence led the comeback, firing home an impressive volley just before half-time to halve the deficit.

Thomastown took the game to Wicklow after the restart, dominating the possession as they searched for an equaliser. Their hard work paid off before the hour mark, Andy Kavanagh rifling home a free-kick to make it 2-2.

United were in charge now and continued to up the pace. Within three minutes they were in control, Steven Connolly racing to the near post to head home Mick O’Neill’s menacing corner. The hosts pushed for an equaliser, drawing a good save from netminder Aidan Hynes, but were sunk when O’Neill capped a fine performance with United’s fourth goal nine minutes from time.

It was a good day also for Bridge United, who left Edenderry with a place in the next round of the FAI Junior Cup safely wrapped up. Bill Lawler was the man of the moment for United, scoring the only goal of the game as they beat Derry Rovers 1-0.

Ormonde Villa completed the hat-trick for Kilkenny teams who had to go on the road on Sunday. They beat Meath outfit Stamullen 1-0 to advance in the Leinster Junior Shield.

At home Evergreen A secured club bragging rights and three points as they got the better of Evergreen B in the Premier Division. Victory wasn’t achieved without a fight, as the B team came from behind twice to draw level, Shane Hanley cancelling out Sean Barcoe’s first minute strike before Noah Canty’s second half header nullified an own goal. The A team were forced to raise their game but did make the points safe when Chris Whearty and Daragh Walshe struck in the last 20 minutes to leave Packie Holden’s side three points clear at the top of the table.

Second-placed Freebooters A had no such problems picking up the points as they handed Stoneyford United an 8-2 beating on the Fair Green. Emmet Nugent ran riot for the Blues, helping himself to four goals. John Hayes grabbed a hat-trick, with Andrew Wall also on the scoresheet.

While Highview closed the gap on Division One leaders Deen Celtic A to three points, Clover United A moved third after a 1-1 draw against the Lions. Kieran Bowe cancelled out Lee Campion’s strike for the Lions in the all-Laois battle.

In Division Two St John’s lost their grip on top spot after they were held to a 1-1 draw by Evergreen C. Pole position now belongs to Brookville, who beat Paulstown 06 3-1 thanks to goals from Dermot Brophy (2) and Chris Connolly. River Rangers are joint third with Castlewarren Celtic, Tommy Manogue’s first half goal securing a 1-0 win away to Callan United B.

Ballacolla were the big winners in Division Three, as their 2-0 win over Highview Athletic B sent them to the top of the table. Deen Celtic B beat Evergreen 46 4-2 while Clover United B had a 7-1 success over Thomastown United C. Damien Madden (2), Vinny Cleere (2), Darragh Carroll, Sean Delaney and Sean Mullins were on target for the Rathdowney side.