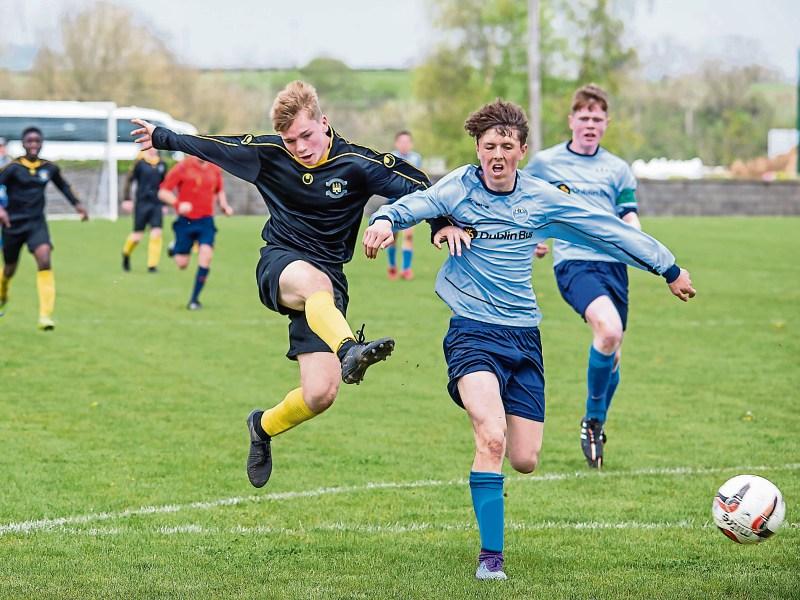 Kilkenny's Ciaran Brennan (left) has been named in the Republic of Ireland under-16 squad for the Victory Shield. Photo: Pat Moore

Kilkenny’s Ciaran Brennan will be gunning for Victory when he joins up with the Boys in Green.

The East End United player has been included in Paul Osam’s Republic of Ireland under-16 squad for the forthcoming Victory Shield.

This will be Osam’s second year to sample the Shield competition. Last year the Irish team drew with Scotland and Northern Ireland and were narrowly beaten by Wales.

“I wasn’t long in the position as Head Coach before last year’s tournament, but this year had we've had a lot more time to assess players,” said Osam. “We have had development squads in the Mayo Cup and Galway Cup so we've seen a lot more players.

"We have also had friendly games against St Patrick’s Athletic and Bohemians U17s so I’ve a good idea of the strength of players in the group.

“In this tournament we can bring 22 players so that gives us the opportunity to look at more players in the games. It’s really not until you play international teams that you can really see which players can play in international football.

"The objective for the season is that we want to have them prepared for the UEFA Development Tournament in May so they can be ready to be handed over to Colin O'Brien and the under-17s the following season.

“As for the tournament itself, I’m looking forward to it, playing similar style opposition to ourselves,” he added. “There's not a lot of difference between the four teams. We’re well prepared for it. It’s about developing the players one step further and the experience they'll gain in tournaments like this will stand to them."

Stepping up the under-16 side is progression for Brennan, who came to international attention following a successful campaign at the 2015 Kennedy Cup with Michael Hoban’s Kilkenny & District League side.

He scored his first international goals in the under-15 team’s 3-1 win over the Czech Republic in April, then went on to lift four titles with the all-conquering St Kieran’s College soccer team and an under-16 inter-league with Ronnie Grace’s Kilkenny side. He was also involved with the Southampton team who won the Super Cup Bowl competition in Northern Ireland during the Summer.