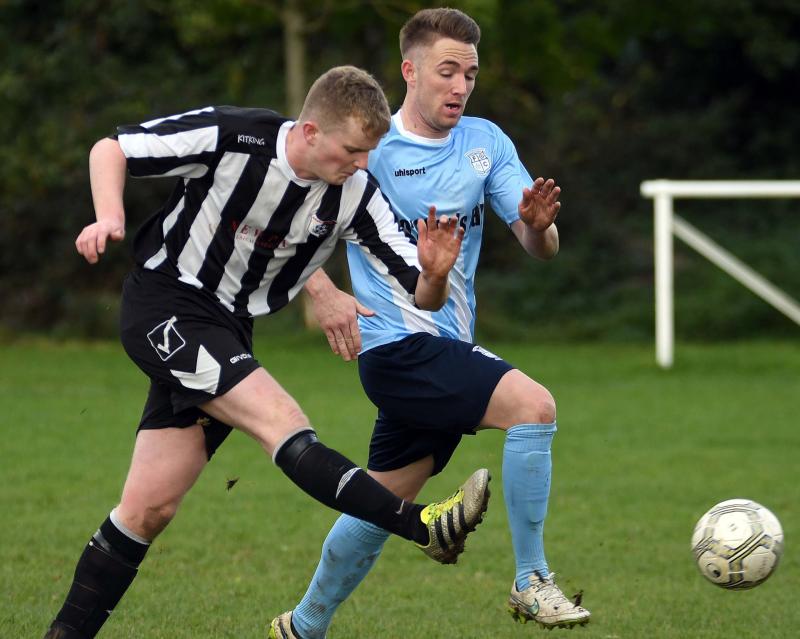 Dean Broaders (right) was back among the goals for Highview Athletic in their FAI Junior Cup win. Photo: Michael Brophy

Two local teams had a great weekend as they advanced in the FAI Junior Cup - without kicking a ball.

Evergreen and Deen Celtic had a quieter day than they had been expecting as they were given walkovers from their opponents on Sunday morning. Newtown United didn't travel to the Kells Road while St Leonard's of Wexford handed the 'Comer men a quick route through.

Highview Athletic also put their name in the hat for the next round, but bucked the trend by playing 90 minutes. They left it late - Dean Broaders (2) and David Dunne hitting the net in the last 15 minutes - as they saw off nine-man New Ross Celtic 3-0 in Harristown.

It wasn't such a good weekend for the League's other teams in the Cup, as three more bowed out. Fort Rangers lost 6-2 at home to Wexford's Corach Ramblers, while Stoneyford United and Thomastown United suffered away losses to Shamrock Rovers (3-1) and Crettyard United (1-0) respectively.

There was drama aplenty in the Premier Division as Freebooters A snatched all three points in a seven-goal thriller in Callan. They left it late though, Emmet Nugent scoring the winner with the last kick of the game as the Blues went back to the top of the table thanks to their 4-3 win over Callan United A. Henry O'Neill helped himself to a hat-trick for the winners, while Eoghan Fahey's goals weren't enough to give United their first point of the season.

In Division Two Castlewarren Celtic went joint top with Brookville thanks to a 2-1 win away to St Ann's. River Rangers missed the chance to join the leaders at the summit aftter they were beaten 1-0 at home by Evergreen C, Pa Leahy scoring the all-important goal for the city side.

It was a good morning also for Ormonde Villa, who went second in the Division Three table thanks to a 2-1 win over Evergreen 46. The only game they've lost this season has been to the league leaders Ballacolla.