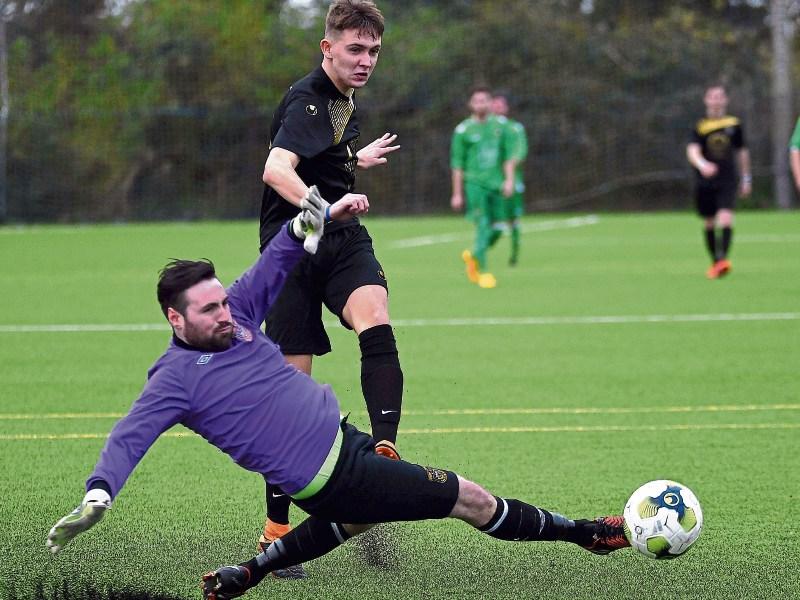 There were no tricks, but Hallowe’en came 24 hours early as Evergreen treated Usher Celtic to some hell on the Kells Road on Sunday.

The city side showed little mercy to the visitors, handing them a 7-2 battering as they steamrolled their way into the next round of the Leinster Junior Cup.

The hosts wasted little time in stamping their authority on the game, Sean Barcoe heading Packie Holden’s side into the lead inside eight minutes.

Little over 60 seconds later they were 2-0 up, Daragh Walshe finishing from a Tommy Earls throw-in. Barcoe doubled his tally with a second goal three minutes from half-time, and while Usher pulled a goal back after the restart their comeback hopes were swiftly ended as Shane Hanley and Walshe made it 5-2 after the hour. Robbie Quan netted the sixth, before Hanley piled on the misery with a seventh for the hosts. A miserable day was made even worse for Usher, as two red cards saw them finish with nine men.

Freebooters also kept their Leinster Junior Cup aspirations on track with an emphatic win on the Fair Green. A week after they grabbed all the goals for their team in the 4-3 win over Callan United A, Emmet Nugent and Henry O’Neill were at it again as the Blues beat Johnstown 4-2. This time the roles were reversed, Nugent grabbed the hat-trick with O’Neill netting one, in a convincing win for the hosts.

There would be no hat-trick of wins for Kilkenny to celebrate, however, as Highview Athletic crashed out when going down 2-0 at home to Romstar.

Deen Celtic’s A team stretched their lead at the top of the Division One table and boosted their goal tally with a big win on Sunday.

The Castlecomer side made it four league wins from four when they blasted Bridge United with a 7-2 win.

Despite the high-scoring finish a three-week layoff meant Celtic took some time to settle into the game, but once they got their rhythm there was no stopping the home side. John Doheny got them up and running with a 20th minute header, before Richie Lynch sprang the offside trap and made it 2-0 after the half hour.

The goals continued to flow for Celtic, who doubled their advantage with strikes from Johnny Dowling and Steven Daly. Lynch and Daly helped themselves to another goal apiece before Mark Delaney rounded off the scoring when his header made it 7-0. Bridge pulled two late goals back, but Celtic were already assured of the points by then.

Clover United A lost ground on the leaders when they were held to a 0-0 draw by Newpark A, but the nine goals in Castlecomer were trumped by the meeting of Lions A and Thomastown United B, which hit double figures in Durrow. Despite Michael Dooley’s hat-trick, and a Lee Campion brace, the Lions had to share the spoils in a 5-5 draw with their visitors.

Tight At The Top

Things are a lot tighter in Division Two, where one point separates the top four sides. Riding high on 10 points are Evergreen C, who prevented Castlewarren Celtic from going top with a 2-0 win on Sunday. Cormac Connolly and Jack McAuliffe grabbed the goals that saw Evergreen take pole position, one point better off than Celtic. They were joined at the summit by Brookville, who drew 2-2 with St John’s, Darragh Watters and Chris Connolly grabbing the goals for the Ballyragget side. The final game saw St Ann’s move out of the bottom two with a 2-1 win away to Paulstown 06.

In Division Three the leaders Ballacolla went four points clear of the chasing pack thanks to a 6-2 win over Thomastown United C. Clover United B are giving chase though, moving up to share second place with Ormonde Villa after their 3-1 win away to Evergreen 46.