All-Star evening was icing on cake for camogie queens 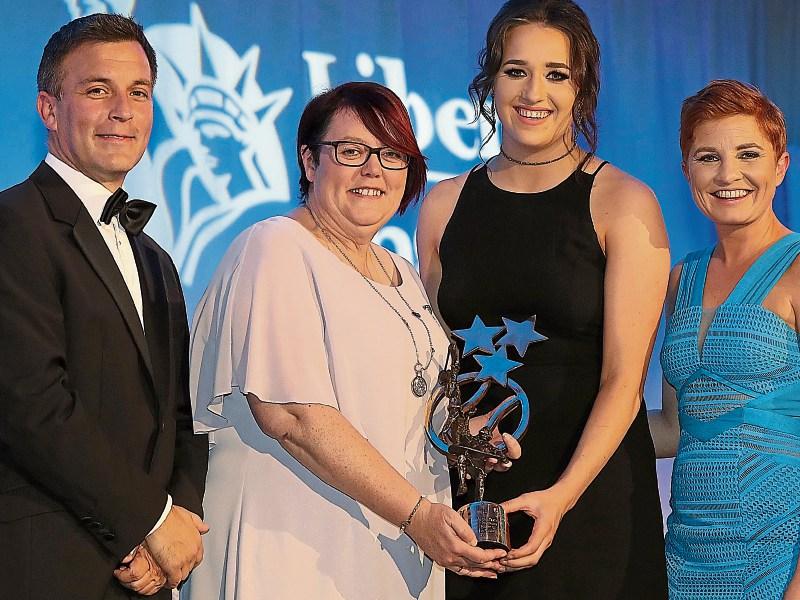 Denise Gaule, Windgap won the senior player of the year award. She is pictured being presented with it by Camogie Association President, Catherine Neary. Photo: INPHO/Ryan Byrne

The season 2016 just  keeps on giving to  Kilkenny camogie.

The all conquering Cats completed the senior/intermediate All-Ireland double.

The county was  the big winner again at the annual camogie All-Stars awards  in the City West Hotel in Dublin on Saturday.

Kilkenny came home with two intermediate soaring stars, eight senior All-Stars and two player of the year awards, plus  the  Manger of the Year awards.

The night began with the Junior Soaring Stars awards that saw Carlow secure two of the six awards on offer with Eleanor Treacy and Ciara Quirke claiming the All Stars.

Armagh claimed two and Westmeath and Roscommon made up the remainder.

Next up was the Intermediate Soaring Stars awards that saw six of the All-Ireland champions, Kilkenny up for gons.

Ciara Holden (Mullinavat) and Jenny Clifford (Dicksboro) claimed two of the six awards on offer, with Cork taking  two and Laois and Meath claiming the other two All Stars.

Next up were the Player of the Year awards.

Eleanor Treacy took  the junior Player of the Year award.

The  Mullinavat player (Holden) got the nod from her peers to claim the intermedaite Player of the Year award.

Next up was the senior player of the year award. Denise Gaule found herself nominated for the senior award with Orla Cotter (Cork ) and Kate Kelly (Wexford).

Denise Gaule got the vote of her fellow players to claim the senior honour for 2016.

The next award on the night was the Manager of the Year. Here Ann Downey up against Mark Brennan of Carlow and Paudie Murray of Cork.

Much to the delight  of the Kilkenny crowd, Ann Downey was granted the honour  in recognition of reclaiming the O’Duffy Cup for Kilkenny for the first time in 22 years.

The main part of the evening then got underway with the senior All Star team for 2016 being announced with all 15 of the Kilkenny team being nominated.

First up was goalkeeper with Emma Kavanagh up against Aoife Murray (Cork), and Mags D’Arcy (Wexford). The Rower-Inistioge net minder claimed the award for the All-Ireland champions.

The right half-back award went to Rebecca Hennelly  of Galway.

The centre-back award went to Anne Dalton of St Lachtain's, which was  her fourth award and Meighan Farrell of Thomastown finished up the back line with the left half-back award earning her her first All Star.

Next up were the midfield nomination that saw Anna Farrell, Thomastown and  Miriam Walsh, Tullaroan up against Orla Cotter (Cork), Ashling Thompson (Cork), Teresa Ryan (Tipperary) and Shelley Kehoe (Wexford).

The first midfield award went to the Rebel County with Orla Cotter claiming the award.

Miriam Walsh of Tullaroan claimed the fifth award for Kilkenny.

The right half-forward award went to Denise Gaule of Windgap.

The centre-forward gong went to Julie Ann Malone of Mullinavat with Aoife Donohue of Galway claiming the left half-forward award.

The right corner-forward award went to Michelle Quilty of Mullinavat.

Kate Kelly of Wexford claimed the full-forward award while Katrina Mackey of Cork finished up the All Star team for 2016 in claiming the left corner forward spot.

The All Star awards evening really was the icing on the cake after a terrific year for Kilkenny camogie.