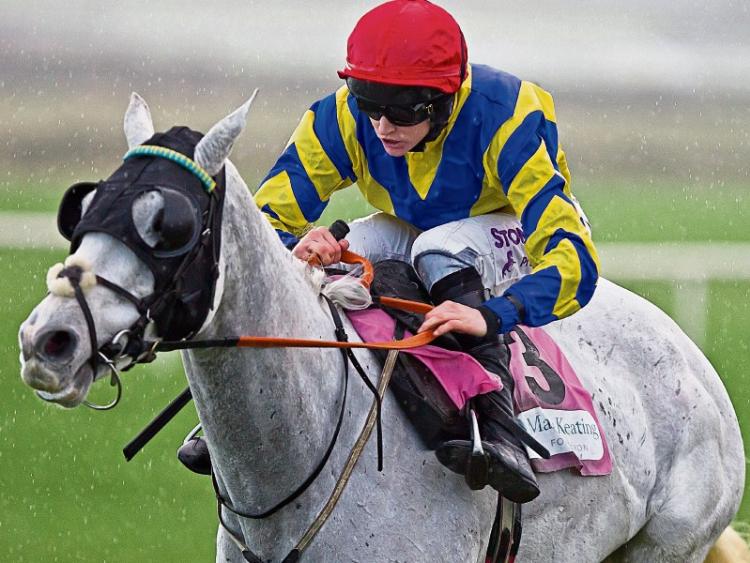 The Ruby Walsh-ridden 8/13 favourite, who beat his stable companion Faugheen to land the spoils last year, emerged from a thick fog to score the win.

Canyon beat his younger rival by 12 lengths. He is likely to step back up in trip as the season progresses.

Sent off the 2/5 favourite, he beat Ordinary World and Attribution under Barry Geraghty and now heads to Leopardstown at Christmas.

Gordon Elliott gave Ruby Walsh another big winner when 3/1 shot A Toi Phil readily accounted for his stable companion Jetstream Jack to take the Grade 2 Florida Pearl Chase. The Drinmore Chase at Fairyhouse could be his next port of call.

There was an emotional outcome to the 2m6f handicap hurdle as the gambled-on 6/4 favourite First To Boogie, ridden by Davy Russell, gave locally-based trainer Madeleine Tylicki, sister of injured jockey Freddy, her first success as a trainer.

Another winner trained nearby was Edward Harty’s Dalmatia who ran out the 10/1 winner of the 2m handicap hurdle while Monalee gave Henry de Bromhead a second winner at the meeting when landing the 2m6f handicap hurdle in the hands of David Mullins.

Samcro made an impressive debut when landing the bumper at odds of 4/9 favourite for Gordon Elliott and Jamie Codd.

The champion trainer’s Let’s Dance was the big winner on the day, taking the Listed Grabel Mares Hurdle under Ruby Walsh at odds of 4/6 favourite.

They followed up straight away when 6/1 chance Haymount landed the beginners’ chase in great style from Coney Island and Mall Dini who both ran promising races.

Mark Walsh began his day with a winner when he landed the three-year-old hurdle on the Joseph O’Brien-trained Landofhopeandglory, the 4/6 favourite readily accounting for his stable companion Zig Zag.

The young rider completed his double, this time in the colours of J.P. McManus, when the Enda Bolger-trained Cantlow took the Risk Of Thunder Chase over the famed banks course.

Noel Meade and Sean Flanagan teamed up to win the 2m4f maiden hurdle with Moulin A Vent as even-money favourite Senewalk flopped on his Irish debut.

Shane Kelly rode winners for two different trainers at Dundalk on Friday. He got off the mark when landing the opening 5f handicap on 11/2 shot Aggression for  trainer Michael O’Callaghan and followed that up when partnering the Tom Cleary-trained Super Focus, a 9/2 chance, to success in the 8f handicap.

Tom’s son Rory found himself in the winners’ enclosure when he took the rated race on 16/1 outsider Red Avenger, the narrow winner giving Damian English another all-weather success.

Dancing Doll ran out a good 16/1 winner of the 12f maiden for Tony Martin and Oisin Orr, while another to score at double digit odds was Carraigin Aonair, the 10/1 winner of the opening 12f division for John Murphy and Niall McCullagh.

The second leg of the same race went to 11/2 shot Black Label who was ridden for Ado McGuinness by Declan McDonogh. Pat Smullen also partnered an 11/2 winner in the shape of the Bill Farrell-trained Strong Than Me in the 10f handicap. Tracey Collins has a fine strike rate at the venue and she teamed up with Ronan Whelan to land the 6f maiden with 6/1 chance Meetyouatthemoon.

Back with a Bang

Willie Mullins had a little fortune on his side as his season took off with a treble, shared with Ruby Walsh, at Clonmel on Thursday.

Mullins landed the featured Grade 2 Clonmel Oil Chase with the Walsh-ridden 2/1 favourite Alelchi Inois but only after Gordon Elliott’s Outlander crashed out at the final fence with the race at his mercy.

Westerner Lady, the even-money favourite, added to impressive tally when taking the Grade 3 mares’ chase for the pair while the three-timer was rounded off with a smooth success for 100/30 chance Miss Me Now in the conditions’ hurdle.

The day started with a convincing success for the Noel Meade-trained Rathnure Rebel under Sean Flanagan in the 2m3f maiden hurdle while Davy Russell returned to domestic action with two quick handicap hurdle winners in the shape of the Elliott-trained 4/1 favourite Veinard and Charles Byrnes’ 5/2 favourite Sea Light.

A tidy gamble was landed when 6/4 favourite Hard Bought won the handicap chase for John Joe Walsh and Phillip Enright.

Partnering the Shark Hanlon-trained Smadynium, Blackmore brought her tally for the season to 17 winners with a runaway 12-length success on the 10/1 chance.

Bryan Cooper will be hoping his luck takes a turn for the better after a run of injuries and he returned after a six week absence with a winner on his only ride of the day. He landed the maiden hurdle on the Henry de Bromhead-trained Avenir D’Une Vie who was returned the 9/10 favourite.

Another winning odds-on chance was Asthuria, in the colours of Hurricane Fly, who landed the mares’ maiden hurdle in great style for Willie Mullins and Ruby Walsh.

The mother and son combination of Mags and Danny Mullins were on the mark with 7/2 favourite Logical Song who took the opening division of the 2m4f handicap hurdle.

The second leg of the same race went to the well-backed 14/1 chance Kilkeaskins First who was winning for the father and son partnership of Philip and Luke Dempsey.

The mares’ handicap hurdle went to 9/1 chance Jo Go who was ridden for trainer Cathy O’Leary by Robbie Power. Prickly, a 4/1 shot, took the rated novice chase for Edward O’Grady and Stephen Gray while Gordon Elliott and Jamie Codd took the bumper with the impressive Champagne Classic at odds of 7/2.

The second day of the Fairyhouse Winter Festival has attracted some of the biggest names in National Hunt racing.

With prize-money of €100,000, the Grade 1 Bar One Racing Hatton’s Grace Hurdle has attracted an entry of 26 horses. Willie Mullins has entered 12 horses including Faugheen, who hasn’t run since his victory in the BHP Insurances Irish Champion Hurdle at Leopardstown.

Mullins and Gordon Elliott dominate the entries for the €85,000 Grade 1 Bar One Racing Drinmore Novice Chase and has seven entries in the Grade 1 Bar One Royal Bond Novice Hurdle. The unbeaten Airlie Beach continues on an upward curve and is certainly worthy of her place in the early line-up as is the Naas winner Saturnas. Elliott also has even entries as he bids to lift the Hurdle spoils. The Festival will be held on Sunday, December 4.