It is TLC time for heavily used pitch in the 'Park 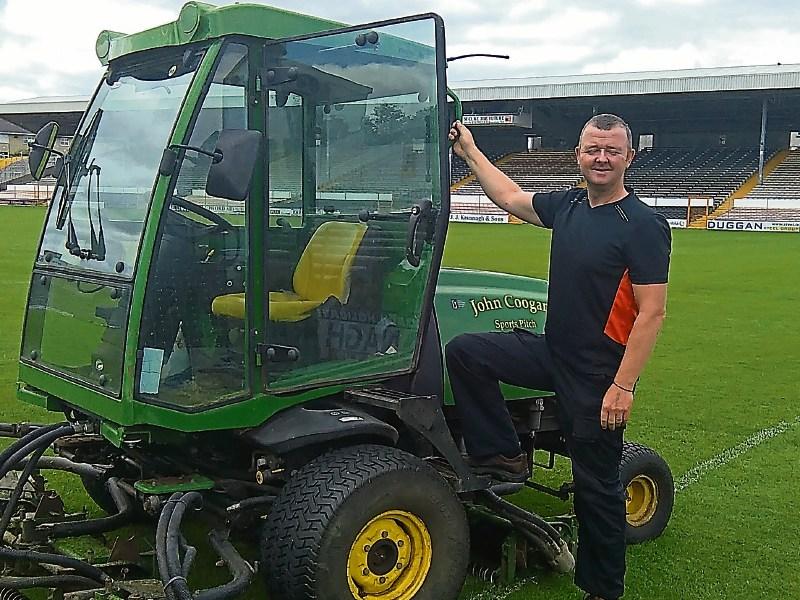 The heavily used Nowlan Park pitch at Kilkenny GAA headquarters is set for a serious dose  of TLC.

The playing surface has been cutting up badly during games of late, but there is an action plan in place to sort the problem.

“There will be a vast improvement by this time next year,” insisted Head Groundsman, John Coogan (pictured below), who is supervising the pitch restoration work.

Basically the root system of the current grass is too shallow.

That is the reason why sods have been  ripping up as players twist and turn sharply.

Now a tougher variety of grass seed that will grow a deeper root system is being embedded into the playing area.

“We are aware of the problem, and we have a plan to sort it out,” County Board chairman, Ned Quinn, told the recent monthly meeting.

Soil and sod samples from the pitch were sent for analysis to a laboratory in England, and based on the results an action plan has been devised.

On top of heavy aeration of the soil,  over  200kgs of a durable rye  seed has been stitched into the field in recent weeks.

“There is no disease as such of the root structure,” John Coogan explained.

Nematodes (larvae of sorts) in the root structure have been eating the root system, hence the weakened grip of the sod.

“We are stitching in a different species of grass, a rye grass,” explained Mr Coogan, who worked in the past in the K Club, Callan and Castlecomer golf clubs.

“There is nothing to get rid of the Nematodes, you have to live with it, but it doesn’t attack the root of the rye grass.”

“There will be a vast improvement this time next year, but it will take  intense  aeration and heavy seeding between now and then to get things right.”

The Park won’t have to be closed. Games will continue, although the schedule is tapering off now, and the Spring National League programme and county squad  training won’t be interrupted.

“The main problem is a shallow rooting system,” the groundsman  explained. “That is why the sods  rip up. There is no hold.

“The whole idea is to get a root structure of four to five inches. That’s the plan.

“It could take over 12 months to get it exactly right,” he added.

The first part of the programme, the aeration and spreading of the new rye seed has bee completed.

In another two months or so, the process will be repeated.

“We are heading  in the right direction now, but things will take time,” Mr Coogan explained.