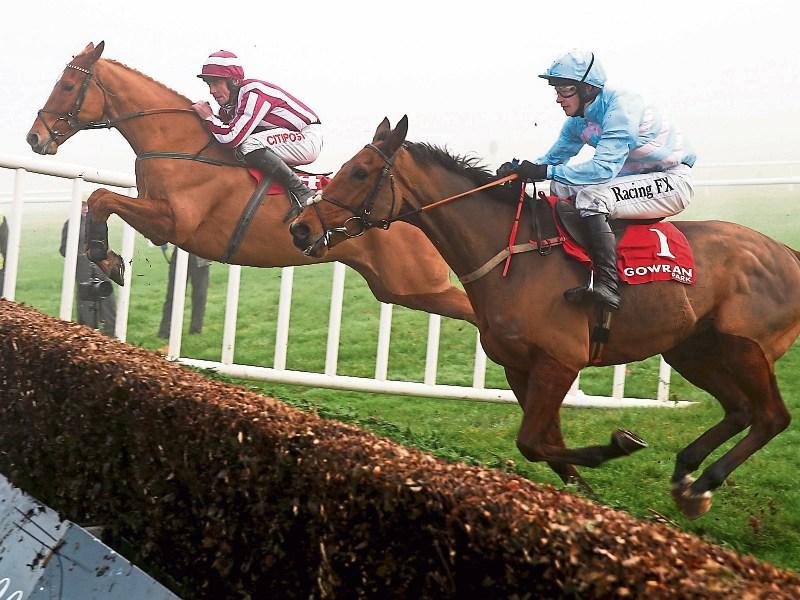 The pair scored with odds-on favourites Invitation Only and Bellshill who both had little difficulty in justifying odds of 1/4 and 2/5 in the maiden hurdle and the beginners’ chase respectively.

Cork trainer Jonathan Sweeney and conditional rider Ambrose McCurtin made  a good start to the day, taking the opening three-year-old maiden hurdle with 10/1 shot Champagne Pat. Another claiming rider to visit the winners’ enclosure was Adam Shortt, who partnered the Tom Mullins-trained 5/4 favourite Catcheragain to her second success in three days in the mares’ handicap hurdle.

Two more senior riders won the remaining races on the card. Robbie Power teamed up with Jessica Harrington to land the novice hurdle with 16/1 chance Light That while Davy Russell partnered the smart Zabana to success in the conditions’ chase at odds of 11/8 favourite for Meath trainer Andy Lynch.

Six of the Best!

Gordon Elliott enjoyed one of those never-to-be-forgotten racing days when he sent out six winners on a high-class card at Navan on Sunday.

It is believed that he is the first trainer in modern times to train six winners at the same meeting - his fellow trainers Dermot Weld, Jim Bolger, Aidan O’Brien and Willie Mullins have won five races.

Elliott shared two winners with Jack Kennedy, who rode recorded his first success since returning from injury when Brelade won the 2m maiden hurdle at odds of 11/1.

Bryan Cooper partnered three of the sextet, beginning with the impressive 11/10 favourite Death Duty in the Grade 3 Monksfield Hurdle. Bull Ride, a 7/1 chance, followed up immediately in the 2m handicap hurdle while 12/1 shot Empire Of Dirt gave Cooper his third winner of the afternoon in the featured Troytown Chase, Elliott’s third successive victory in the historic race.

Elliott finished his remarkable day on a high when taking the bumper with the Jamie Codd-ridden 13/8 chance Three Swallowsnick.

Willie Mullins sent out the only other winner of the day when Min landed the beginners’ chase under Ruby Walsh. The impressive 10 length winner was returned at odds of 1/3 favourite.

The pair struck early when Hes Our Music, sent off the 5/4 favourite, comfortably landed the claiming race. They followed that up later in the session when 7/2 favourite Twistsandturns took the opening division of the 6f handicap.

Wayne Lordan was another to notch up a brace of winners. He teamed up with Navan-based Pat Martin to land the 8f fillies’ maiden with 11/4 favourite Adieux. A second winner came his way when 6/1 chance More Kudos prevailed in the second division of the 6f handicap for Cashel trainer Michael Browne.

Dublin-based trainer, Garvan Donnelly was on the mark with the Colin Keane-ridden Plough Boy, who took the 7f handicap at odds of 8/1. Keane was another to enjoy a second winner as he won the nursery handicap with 7/2 favourite Burning Brightly who is trained in Cork by John Murphy.

Andy Oliver and Conor Hoban took the 7f fillies’ maiden with newcomer Fizzy Friday, who won at odds of 16/1.

Off the track for 19 months, Champagne Fever made a winning return for Willie Mullins and Ruby Walsh when landing the Listed Boomerang Animal Bedding And Boomerang Horse & Country Store Chase at Thurles on Thursday.

Sent off an 11/8 chance, the dual Cheltenham festival winner had a head to spare over former Gold Cup winner Lord Windermere with the well-supported 5/4 favourite Wounded Warrior only fourth of the six runners.

Mullins and Walsh also combined to take the opening beginners’ chase with 2/1 shot Bellow Mome who saw off 8/11 favourite General Principle with plenty to spare. The champion pair completed a treble when Augusta Kate, the 2/9 favourite, easily won the mares’ maiden hurdle.

Jessica Harrington and Robbie Power took the rated novice hurdle with Billy’s Hope who won at odds of 7/2 while at double that price, Catcheragain took the novice handicap hurdle for the father and son team of Tom and David Mullins.

The Declan Queally-trained Cloudy Morning completed a hat-trick of wins when successful at Wexford on Tuesday.

A winner at Clonmel and Wexford at the end of last month, the 6/1 shot raced to a comfortable nine-length success under Barry Brown.

Willie Mullins and Ruby Walsh shared two winners with French-import Crack Tiepy, sent off the 4/9 favourite, making a winning start for her new connections in the 2m4f hurdle.

Daisy’s Gift completed the brace at more attractive odds of 8/1 with a clear-cut victory in the mares’ beginners’ chase.

Forge Meadow just saw off Toe The Line to win the opening mares’ maiden hurdle for Jessica Harrington and Robbie Power, the exciting four-year-old winning accounting for the 6/4 favourite at a price of 15/8.

Gordon Elliott and Bryan Cooper struck with 4/5 favourite Sutton Manor who easily won the 2m2f maiden hurdle while 3/1 favourite Capture The Drama made no mistake in the handicap chase for Newmarket-on-Fergus trainer Aengus King and Mark Walsh.

Favourite backers were just denied in the concluding hunters’ chase when Maple Mons readily held off the challenge of 13/8 shot Sizingdowntherhine. Richie Deegan rode the 7/1 winner for  trainer David Christie.

The winner of the Outstanding Achievement Award will be announced at the 2016 Horse Racing Ireland Awards at Leopardstown on Monday next. Awards will also be presented in six other categories: Horse of the Year, National Hunt Racing, Flat Racing, Point-to-Point Racing, Contribution to the Industry and Racecourse of the Year.

“The response has been great with plenty of votes have been coming in through the website,” said Michael O’Rourke, Director of Marketing and Communications at Horse Racing Ireland. “It’s clear to see that racing fans are really getting behind their favourite stars.”