Wexford woe for the Cats, but Youths can still make next phase 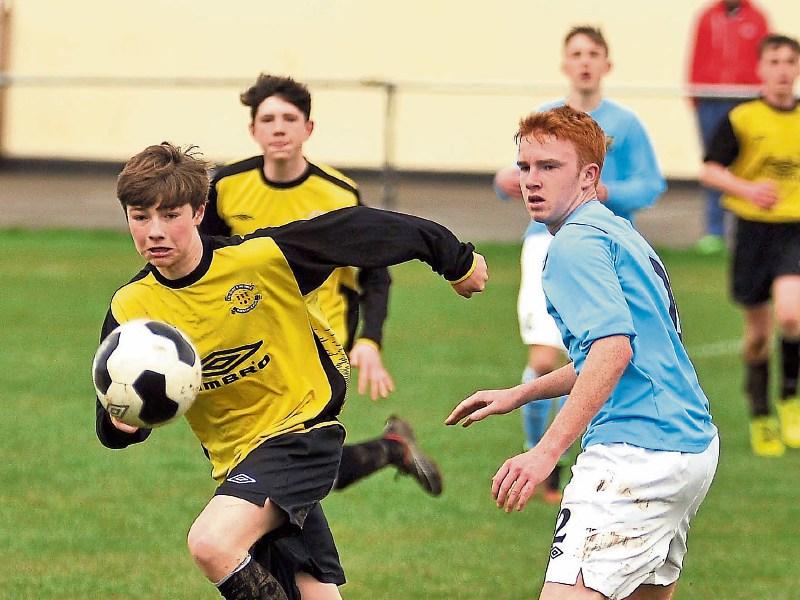 Rory Monks was on target for the Kilkenny Youths, but couldn't stop the Cats from crashing to defeat against Wexford. Photo: Michael Brophy

The result wasn’t what they wanted, but the Kilkenny & District League’s youth side still have their destiny in their own hands.

The Cats suffered an opening day defeat when they were undone by a sharp and fast Wexford on Saturday, but they can still make it through to the next phase if they beat Carlow in their remaining group game.

A win over the neighbours will be enough to see James Kelly’s side advance to the knockout stages, a result which is well within their reach.

Kilkenny were impressive for large spells of Saturday’s clash in Ferrycarrig Park but were undone by a slow start which allowed their hosts to take a grip on the game they would not relinquish.

Much like their Oscar Traynor counterparts, the young Cats were forced to travel with a light squad for the fixture. Wexford smelled blood and went for the jugular right from kick-off.

The game was barely two minutes old when Kyle Firman carved the Kilkenny defence open with a peach of a through ball for Luke O’Neill to chase. He was on it in a flash and let fly with a powerful low shot, but Michael Walsh got down smartly to make a fine save at his right post.

The chance only served to whet Wexford’s appetite as, two minutes later, they hit the lead. Picking up possession from a throw-in on the right, the tricky Jordan Redmond used his pace to cut across the face of the box before feeding the ball to O’Neill. His swift pass was picked up by Cillian Gilligan, who was denied by another Walsh save, but the ’keeper could do little to prevent Dylan McVeigh from gobbling up the rebound and slamming it home.

Wexford were keen to kill off Kilkenny’s enthusiasm as quickly as possible. They went a long way towards doing just that when they doubled their lead with just 11 minutes on the clock.

Again, it was their pace and industrious play across midfield that led the way to goal. Ethan Vickers sprayed a pass from midfield out to the right wing, where Redmond took over. A burst of speed took him past two would-be challengers, before he turned sharply on the end line and delivered a precise pull-back from which Gilligan couldn’t miss.

At that stage Kilkenny seemed to be in all sorts of trouble, but the visitors raised their game and fought back. Killian Duffy went within a whisker of getting his side back into the game when he stormed up from defence to get on the end of Kyran O’Sullivan’s 18th minute corner, but his glancing header flashed just wide of the far post.

The chance came at the start of what proved to be a good spell for Kilkenny. They changed things up a little, with Duffy stepping up into midfield to stifle the home side’s most threatening unit.

The plan worked as, before the half hour, they were back in the game. Rory Monks dropped back into midfield to win possession, then showed strength to shrug off a challenge and power to fire home an unstoppable shot from the edge of the box.

The goal sparked Kilkenny into life. They took a stranglehold on midfield, knocking Wexford out of their stride and limiting their time on the ball.

However, for all their hard work they couldn’t find an equaliser. The best chance fell to Michael Byrne, who ran on to the ball after Adam Brennan won possession and teed his team-mate up, but Byrne’s shot was straight at Wexford netminder Darragh Brooks.

Wexford shook themselves to life again just before half-time, but spurned a great chance to restore their two-goal lead when Luke O’Neill found room to break down the wing. He managed to whip a dangerous ball across the box, picking out Jordan Redmond at the back post, but he crashed his shot into the side netting.

Kilkenny ramped up their efforts in the second half, but couldn’t find the goal their work deserved. Jordan Molloy fired a quick free-kick into the Wexford wall while Rory Monks had two penalty claims waved away after causing problems in the box.

Still, Kilkenny pressed on. They went close – really close – to getting back on level terms when Monks split the Wexford defence with a sweet 73rd minute pass for Cillian Power, but defender Dylan Fleming made a vital block to snuff out the danger.

Wexford still had work to do as, from the resulting corner, the Cats went close again. Jordan Molloy got his head to another teasing Kyran O’Sullivan corner, but the ball deflected off a defender, taking the sting out of the effort.

Kilkenny refused to give up, but knew it was going to be one of those days when Wexford survived one last scare. Adam Brennan almost bagged a goal when his lofted shot sailed towards the net, but Darragh Brooks back-pedalled far enough to fingertip the 87th minute shot over the bar.

Again, Kilkenny went close from the corner, as Killian Duffy flicked on O’Sullivan’s inswinger, but a defender cleared the ball off the line. That was their last chance – but there are positives to take ahead of the Carlow clash, where a win will send them through.