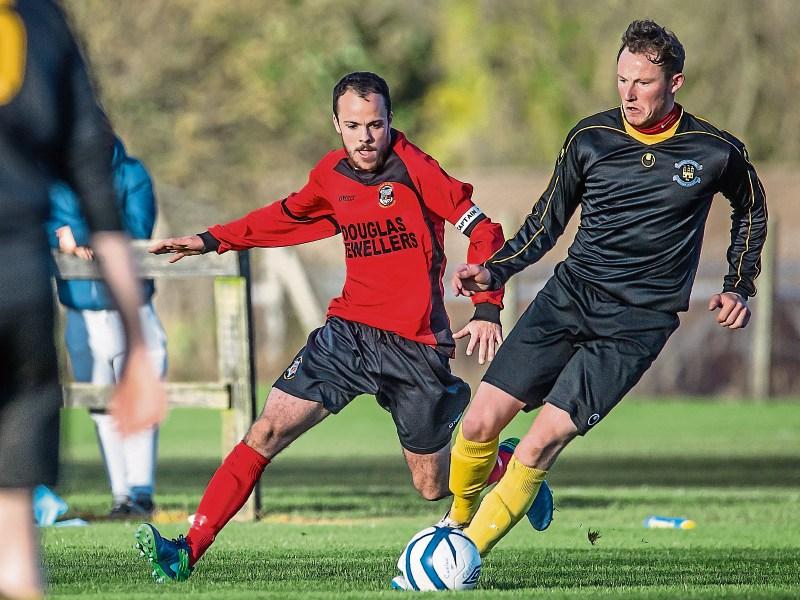 Henry O'Neill, seen here in action for Kilkenny, scored twice as Freebooters A beat Freebooters B in the Premier Division. Photo: Pat Moore

Freebooters A moved to the top of the Premier Division table, but had to see off their clubmates to do so.

It looked like the A team were on their way to a win when James Kelly put them into a first half lead, but Freebooters B gave them a start when Shane Kelly levelled matters in the second half. However, Henry O’Neill struck twice, with Kieran Moloney also getting on the scoresheet, as Freebooters A won 4-1 to go three points clear of Evergreen A at the summit.

Things are getting even more interesting in Division One as Highview Athletic A closed the gap on leaders Deen Celtic A thanks to a 5-2 win over Fort Rangers. Sheamie Kavanagh led the way with a brace for the Graig men in Wallslough on Sunday morning.

An emphatic win was secured when Jordan Brett, Shane Ralph and Gary McDonald completed the scoring, making it four league wins from four for Highview.

Clover United missed the chance to cut Celtic’s lead to just one point when they were held to a 1-1 draw by Newpark, Pa Clifford’s goal giving the city side a share of the spoils.

It was a good day also for Bridge United, who earned their first win of the season when they beat Thomastown United B 3-1 in Goresbridge.

Castlewarren Celtic’s charge shows no signs of slowing down as they continued on their winning ways in Division Two. A 2-0 victory over Paulstown 06 - the second time they’ve beaten Paulstown in a matter of months - saw them stay three points clear at the top of the table.

However, River Rangers are hot on their heels, bouncing back from the 3-1 loss to Castlewarren with a 4-2 win over St John’s. Brian Callanan, Daragh Murphy, Jason Darmody and Brendan Burke were on target for Rangers, who are three points behind Celtic.

There was only one game in Division Three, but it proved to be a high-scoring one as Highview Athletic B beat Thomastown United C 6-2 in their local derby.

Dane Flood and Jack Walsh grabbed a brace apiece with further goals from Ian Kavanagh and Terry Dreelan as Highview earned their first win of the season, a result which saw them overtake Thomastown in the table.