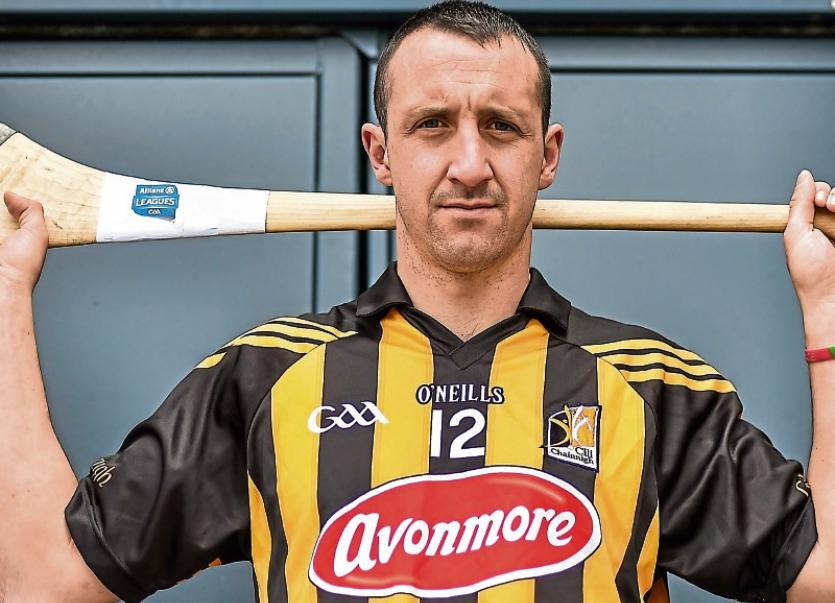 Eoin Larkin was sure in his mind that the time was right. The door was left open  to continue, but no, the loudest voice in his head was shouting “go”.

“I slept like a baby last night,” he told me when we spoke on Friday, only hours after he went public with his decision to retire as an inter-county player.

“It was the best night’s sleep I had in about three weeks.”

There was inner turmoil, of course. He had resumed pre-season training with the squad and saw out the preliminary fitness tests.

But the thought that had been in his head since James Stephens exited from the senior championship against O’Loughlin Gaels on October 9 just wouldn’t go away. Even assurance from Kilkenny manager, Brian Cody that he was still wanted failed to clear his head.

“Last week I was just thinking, do you really want to go through all this again,” he said when explaining the thought process. “Yesterday it came on top of me and that was that.”

Came on top of you, we wondered?

“Yeah, I heard a couple of lads saying how difficult it can be, but you have to known when it is time to go,” he said in reply. “Yesterday when I thought about it I felt comfortable.

“The last couple of weeks I was in a ‘should I or shouldn’t I?’ situation. Yesterday I felt really steady about it. I went home last night and told my wife, Anne. She just said ‘are you sure?’ I said I was positive. That was it then.”

He put the statement announcing his retirement together on Thursday, and  released it early on Friday, much to the surprise, and disappointment, of high ranking officials in the county.

If there was any lingering doubt it was banished when he met his mother on Friday. She told him the stress that was noticeable on his face in recent weeks was gone.

“She was probably right,” Eoin said when he looked back. “I was lying in bed thinking about it. It was rolling over in my head. I wasn’t sleeping great, tossing and turning and so on. Last night I went to sleep straight away and slept the whole night through.”

When he told his father and greatest fan, Alan, who appreciated how heavily the decision was weighing on Eoin, the reply was: “Look, you would have been happy with one All-Ireland. Well, you go with eight.”

There was sound reasoning behind that, Eoin felt.

Eoin Larkin turned 32 on July 27. While the miles on the body clock are considerable, he was still good enough to make the first XV in the All-Ireland final in September after the “toughest” season in the 12 he spent in the black and amber at senior level.

The figures makes startling reading - 8 senior All-Irelands won; 10 Leinster championship; 6 National Leagues; 2 All-Stars and he was Texaco Hurler of the Year in 2008.

He captained Kilkenny to All-Ireland victory in 2012.

Larkin is Kilkenny’s third most ‘capped’ championship hurler of all time. He never missed a senior hurling championship tie during his 12 season career (56 starts, two as a sub).

With Henry Shefflin and Tommy Walsh, he made up the ‘Happy Trio’ who featured in all the games during the four in-a-row years (2006 to 2009).

He is ranked sixth in the Kilkenny all time championship scoring list, having scored in 80% (46/58) of the games. He scored at least twice from play in 50% of those games, while in 12 All-Ireland final appearances (including two replays), Eoin Larkin scored 1-24 from play (see Leo McGough story).

The figures are one part of the story. They were made real by the rich talent of a dedicated athlete who was a master at reading plays, developing situations; a man who could score and create, cover too, and who understood better than most the importance of being a team player.

Cody often gave him a ‘libero role’, imposing no restrictions, granted in the safe knowledge that the Larkin though process would benefit the team.

One loved his body weave, whereby he would lie  into tackles and use the force of impact to realign his body to generate power for shooting with that distinctive left under right grip on the camán.

That was unique Larkin. He was tough when toughness was the requirement.

He had a delicate, silken touch when the moment required. James Stephens will now have exclusive rights to his services.

He didn’t make much of the final call to his family. His oldest son, Mark (11) heard the news on the radio. His daughter Ellie (5) is too young to understand, while Hollie (10) said she heard the family talking about it, so she was prepared.

“They were grand about it,” Eoin insisted. “That was most important. I am grand about it too. I was grand and relaxed once I had made the decision.”

He said he would have liked Kilkenny to have won the All-Ireland in September to send him on his way, but he insisted the outcome of the final against Tipperary didn’t impact on the decision.

“You know if you go back that Kilkenny have a chance of either getting to or winning the All-Ireland,” he reasoned. “I always think about the so-called weaker counties. They train hard too, show the same dedication but they might never get to Croke Park.

“I have been very lucky. I played in 12 All-Irelands. It is not a bad strike rate.”

Earlier this year the Corporal (he will soon be leaving the Army) did a tour of duty with the UN in the Golan Heights, Syria. He arrived back in April.

Missing the early part of the season turned this into “a tough year, tougher than anything”. He went away with the expectation of coming back and doing what he had done seven or eight years previously after he served in Kosovo.

“It didn’t work out like that,” Eoin revealed. “I put my head down, worked hard. It definitely was the most difficult year for me in there. I have no doubt if I went back and got a good pre-season behind me that I would be able to pick up where I left off.

“But no, now is the time to go. Whatever people thing might be left in you, the decision has to come down to how you feel yourself. I have a young family. There is more to life than hurling, and the demands it places on you and family.

“People have put so much time into my career, now is payback time,” he insisted.

When he looks back, what are the moments?

“They were all amazing. I had great times all the time.”

He was part of the greatest era ever in Kilkenny hurling. He appreciated he played with some of the best men ever to grace  the game.

He bought into everything he was expected to buy into, feeling you couldn’t survive at inter-county level if you didn’t.

“I would like to think I am the type of person that if I am going to do something it is all in, or I won’t do it at all,” he suggested. “That’s what I did with the hurling.”

The spirit in the camp was always paramount. That was one of Brian Cody’s strengths, he assured. Cody could find players who had it, and he brought it out forcefully in them.

What is more  important, hunger or skill?

“If you have the hunger first, you can develop the skill,” Larkin replied. “You can’t do it the other way round.”

Life in the Kilkenny camp was hard and demanding, but there was lots of fun too. There had to be, he insisted. Achievement had to be celebrated to be fully appreciated, and Kilkenny had plenty of those - celebrations.

When he arrived in the dressing-room in 2005, the same year he made his championship debut against Offaly, his fellow travellers included the then experienced John Hoyne, Eddie Brennan, D.J. Carey, Henry, Martin Comerford and others.

As he looked around he was thinking if he wanted a jersey, he had to take it from one of those guys. Straight away he understood the demands. There could be no half measures.

The day he hit the magical 8 in All-Ireland finals, the figure made famous by the mighty Ring and Doyle, we wondered did he feel anything special. He felt pain. He broke his thumb that day.

The four in-a-row years he felt he, and Kilkenny, were at their mightiest.

“At the height of the four in-a-row I didn’t think we would ever be beaten, unless we beat ourselves, unless we weren’t paying attention to what was in front of us,” he said when he looked back.

“The attitude from every player in every game was superb. To go four years unbeaten in the championship, you had to be tuned in.”

He reminded that comparisons were often made between the tough Kilkenny training sessions and games. He admitted matches were often easier than training.

“I am not saying we used to kill each other,” he smiled, “but the intensity in training  was sometimes more than what you would get in  matches. I remember going into the dressing-room often after training and you wouldn’t talk to lads for five or  10 minutes because you couldn’t catch your breath.

“But as soon as you could speak, you were all friends again. We went at each other bald headed.”

Once things went over the top, and he had a spat with Tommy Walsh. It was before the 2014 All-Ireland. The falling out lasted a couple of  hours.

Tommy attacked him because he attacked Padraig (Walsh). Tommy ended up giving Larkin a “sceilp”.

“I stormed off thick,” Eoin smiled at the thought. “In fairness to him, he called up to the house afterwards but I wasn’t having any of it. Eventually I texted him and sorted it.

“We often said afterwards that it was probably the winning of the All-Ireland.

“It brought us closer together. We were fired up to the last.

“That showed nothing was going to stop us. That is how intense it was.

“That was how much we wanted to win. I told him he was a man to apologise.”