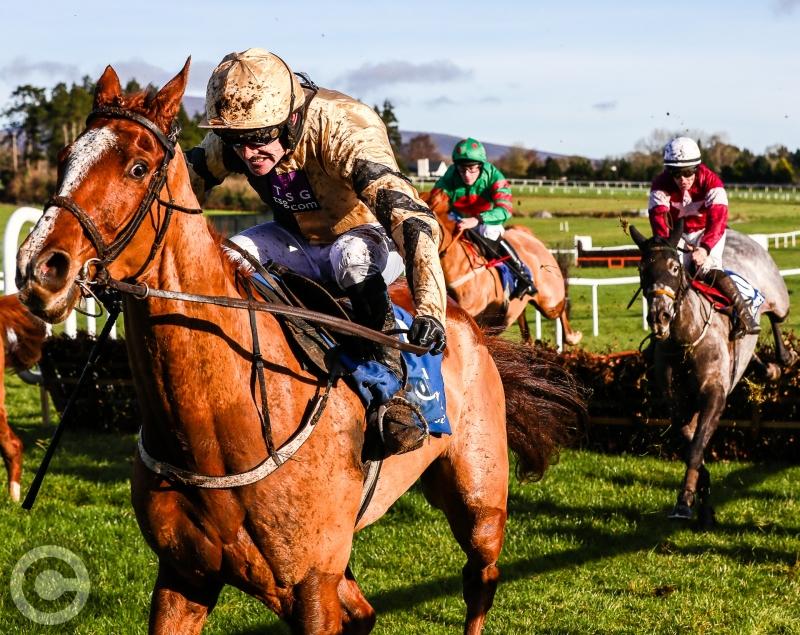 Sent off the heavily supported 4/5 favourite, he saw off determined challenges from both Outlander and Sub Lieutenant under Ruby Walsh.

Walsh was also on board the Mullins-trained even money favourite Turcagua, who easily landed the 2m4f maiden hurdle and American Tom who took the beginners’ chase at the same price.

The champion trainer completed his four-timer when Come To Me landed the bumper under his son Patrick, the four-year-old stretching clear inside the final furlong to win at odds of 7/2 joint-favourite. The champion amateur has won the last four bumpers run in Ireland.

Young Tralee rider Cian Collins was once again seen to good effect when partnering 11/2 chance Dawerann to success in the 2m4f handicap hurdle, another winner for Gordon Elliott.

Paul Townend matched Douvan as the star of the show at Cork on Sunday where he rode four winners on the same card for the third time in his career.

He rode the last four winners at the meeting, beginning on Willie Mullins’s star two-miler who he partnered to a facile 22-length success in the Grade 2 Kerry Group Hilly Way Chase, the 1/6 favourite surviving a mistake at the third last fence.

Mullins and Townend also combined to land the Grade 3 mares’ novice chase with 4/7 favourite Listen Dear who made all the running to score by eight lengths.

Adrian Maguire, who trains in Cork, gave Townend his third winner in the shape of Knockraha Pylon who won the 2m handicap hurdle at odds of 5/1. The former champion jockey rounded off a memorable day with success on the Mags Mullins-trained 7/4 favourite Logical Song in the 2m4f handicap hurdle.

Gordon Elliott and Jack Kennedy took the three-year-old maiden hurdle with 6/1 shot Dinaria Des Obeaux who raced to a stunning 29-length success over the gambled-on Tout Est Permis to complete another 1-2 for Gigginstown House Stud.

The 4/1 chance saw off 4/6 favourite Briar Hill and Three Stars to land the spoils and is likely to step up in class at Limerick at Christmas.

A trip to Leopardstown in two weeks’ time is on the cards for Oscar Knight, who readily landed the valuable 2m4f handicap chase for Tom Mullins and Mark Enright.

Our Duke will not be seen until the New Year after his impressive return to action in the beginners’ chase which he won at odds of 4/1 for Jessica Harrington and Robbie Power.

Ted Walsh and Ian McCarthy scored a surprise 66/1 success in the opening maiden hurdle which they won with Any Second Now who has the makings of a fair prospect.

Willie Mullins and Ruby Walsh also have plenty to look forward to with Pravalaguna who landed the mares’ maiden hurdle at odds of 5/2.

Pause And Ponder, a 12/1 shot, did not go unsupported as he landed the 2m6f handicap hurdle for Kinsale’s Robert Tyner and Phillip Enright. Mags Mullins saddled newcomer Dr Wallace to win the bumper with Patrick Mullins partnering the heavily-backed 9/10 favourite to a near four-length success.

Rossa Ryan is no stranger to success on the pony racing circuit and the 16-year-old from Tuam rode his first winner on the racecourse when taking the second division of the apprentice handicap on 20/1 chance Solar Heat, trained by Dot Love, at Dundalk on Friday.

It was by far the longest priced winner of a night that was dominated by Curragh trainer Johnny Feane who landed the first treble of his career.

Feane teamed up with Gary Halpin to win the opening division of the apprentice handicap with 7/1 chance Bulgadin Lady and gave Kevin Manning the first of two winners when Secret Existance took the 10f maiden at odds of 13/8 favourite.

Power Grid rounded off a good night’s work for the pair when taking the 10f handicap in great style at odds of 4/1 joint-favourite.

Another 4/1 joint-favourite to win was Go Kart who landed the 5f handicap for Patrick Prendergast and Danny Sheehy. Michael O’Callaghan was a third Curragh trainer on the mark as Dreamy Gal landed the fillies’ maiden in the hands of Shane Kelly at odds of 6/1.

Damian English, who trains at the Naul, saddled 9/2 chance Red Avenger to win the 1m handicap under Rory Cleary. One that had to travel a little further was 3/1 favourite George Boole who was ridden to victory in the 7f nursery handicap for Cork trainer John Murphy by Declan McDonogh.

Rachael Blackmore went back to the top of the conditional riders’ championship race when landing a second success on the Shark Hanlon-trained Smadynium in the 2m3f handicap chase at Clonmel on Thursday.

Riding her 18th winner of the season, the Killanaule-native brought the 3/1 favourite home an eight-length winner. She also emerged as the leading claiming rider at the venue for 2016.

Clondaw Warrior, a fine servant for the stable, took the step up to three miles in his stride with success in the conditions’ hurdle at odds of 5/6 favourite.

The Irregular, trained and ridden by Denis Hogan, scored a narrow 8/1 success in the 2m handicap hurdle while over half-a-mile further. The Don Cashman-trained Bobbythegangster won the opportunity handicap hurdle at the same odds in the hands of Conor Walsh.

Powersbomb ran out the 14/1 winner of the beginners’ chase for Sligo trainer Brian McMahon and Mikey Fogarty while Noel Meade’s Kagney made much of the running under Danny Benson to land the qualified riders’ maiden hurdle at odds of 3/1.

Minding was crowned Horse of the Year at the 2016 Horse Racing Ireland Awards. Winner of five Group 1 races for Aidan O'Brien during the season, she was the outstanding filly of the Classic generation.

The National Hunt Award went to champion trainer Willie Mullins while Aidan O’Brien won the Flat Award after a truly remarkable year where he enjoyed 22 Group 1 wins worldwide along with a 1-2-3 in both the Newmarket 1,000 Guineas and the Prix De l’Arc De Triomphe. 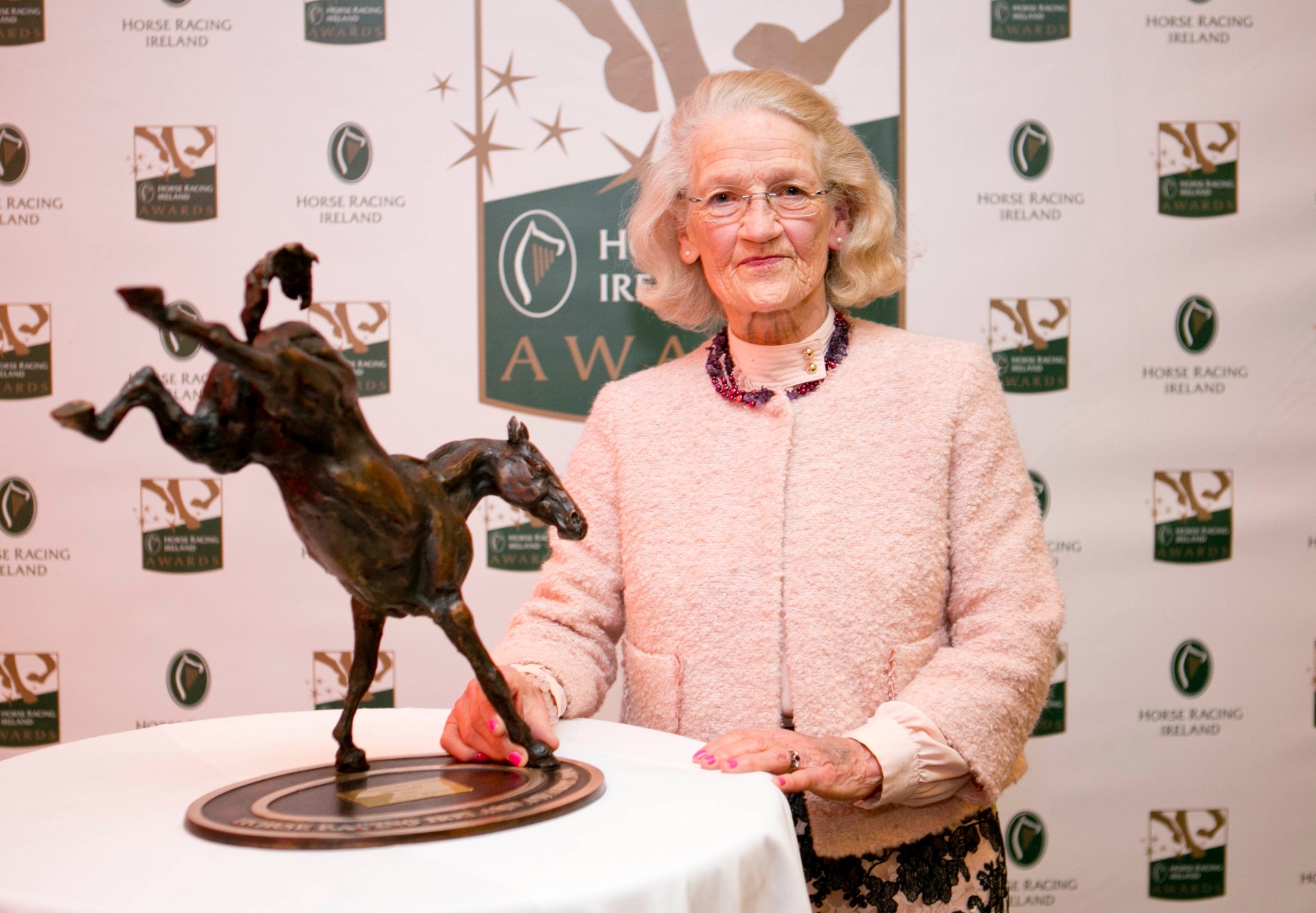 The Contribution to the Industry Award went to the matriarch of the Mullins racing dynasty, Mrs Maureen Mullins (pictured above). Part of the Irish racing landscape for the best part of six decades, she was married to one of Ireland’s greatest trainers, the late Paddy Mullins.