Kilkenny camogie to play its part in concussion study 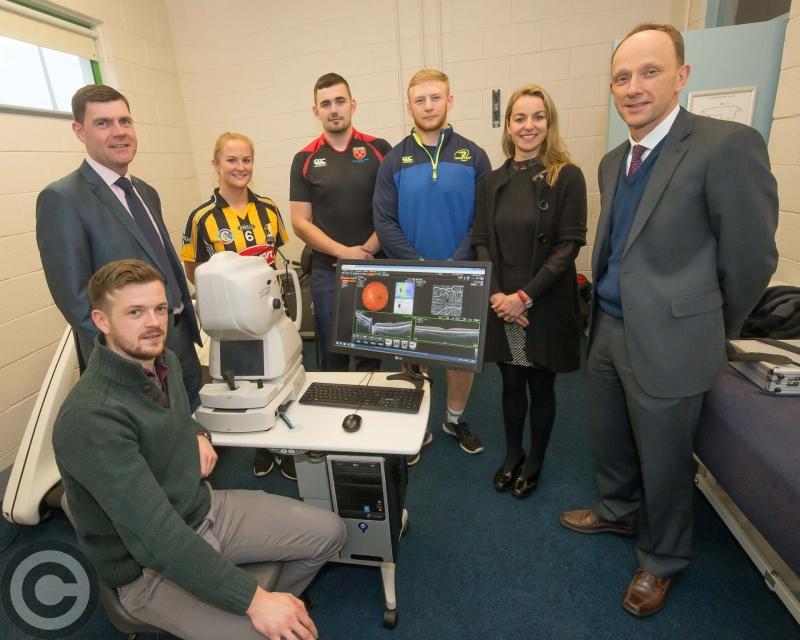 Kilkenny camogie player Edwina Keane (third from left) and Dr Clare Lodge (second from right) were in IT Carlow to launch the new study on concussion. Photo: Pat Moore

Members of Kilkenny's camogue All-Ireland title-winning team have joined the battle to get to the bottom of concussion in sport.

The Cats, who beat Cork in this year's senior final, are just part of the sporting community who will come together to work in a study led by Stoneyford-based Clare Lodge.

The pilot study on sports concussion - the first of its kind worldwide – which will use the retina of the eye as a potential assessment tool in the diagnosis of concussion, was launched today by Institute of Technology Carlow.

Dr Lodge, a chartered physiotherapist and lecturer in sports rehabilitation and athletic therapy at IT Carlow, will lead the two-year project, which is being funded by the Irish Research Council.

The study will concentrate on ocular metrics, monitoring intraocular pressure measurements and retinal imagery in 200 contact sports participants, aged 18-24 years. Other participants in the pioneering programme, as well as the Kilkenny camogie team, will come from League of Ireland team Shamrock Rovers.

Concussion remains a global issue. The leading national public health institute of the United States, the Centers for Disease Control and Prevention, has reported that 20% of the annual 1.7 million concussions sustained in the US are sports-related.

Separately, research has found that contact sports such as rugby union exposes the player to a 28% risk of potential concussion. There are currently more than 6 million registered rugby union players in 119 countries.  Single incident concussions are not the only concern; 49% of 133 interviewees during an Ulster schools Rugby surveillance study said they had sustained a prior concussion, highlighting its prevalence.

Despite the dangers of concussion, its current diagnosis remains subjective in nature and relies on clinical signs and symptoms that are interpreted by the tester. To date, no imaging techniques have been validated as diagnostic tools for concussion, and the correlation between imaging findings and clinically measurable cognitive or behavioural functions is variable.

Nationally, there is a lack of published data on the incidence and prevalence of concussion in sports such as hurling, soccer and camogie with a definite scarcity of information on female concussion.

Concussion studies are ongoing and the medical professions are keen to explore and develop improved methods in identifying early signs as well as the potential long term effects of concussion.  Literature on concussion in the elite adult athlete has progressed, but more attention needs to be directed to the amateur and younger athletes, according to Dr. Lodge.

"Exploring objective markers that may contribute to the diagnosis of concussion is fundamental to help us identify these players early and optimally manage them," she said.

"We know that the retina is an extension of the brain and we are aware that studies investigating shaken baby syndrome have identified intraocular hemorrhages (internal eye bleeding) that may precede both the clinical and radiologic (scanning) recognition of brain tissue trauma.  Therefore, if we can explore and identify whether there are retinal changes post blunt head trauma this will pave the way for further studies."

The study will be co-supervised by consultant ophthalmologist Dr David Kent.

"As we know, the problem with concussion in sport is that there is no effective method to visualise the brain to examine it for the effects of concussion so we must rely on subjective testing of the player, which can be unreliable," he said. "As eye doctors, we visualise and image the retina every day. It makes perfect sense therefore to examine the retina in order to look for the potential effects of concussion and, by extension, try and get a handle of what's going on in the brain - especially in the acute phase following the injury.

"This study, the first of its kind, gives us a unique opportunity to study the effects of concussion by studying the eye. We are grateful to Institute of Technology Carlow, Topcon Ireland and MED Ireland and to for supporting this important work."

The research will be carried out by Ben Hunt, a postgraduate researcher at Institute of Technology Carlow. Ophthalmic instruments supplied by TopCon Eyecare and MED surgical will be central to the study with any changes in the baselines measures of intraocular pressure and retinal images a possible indication of concussion injury.