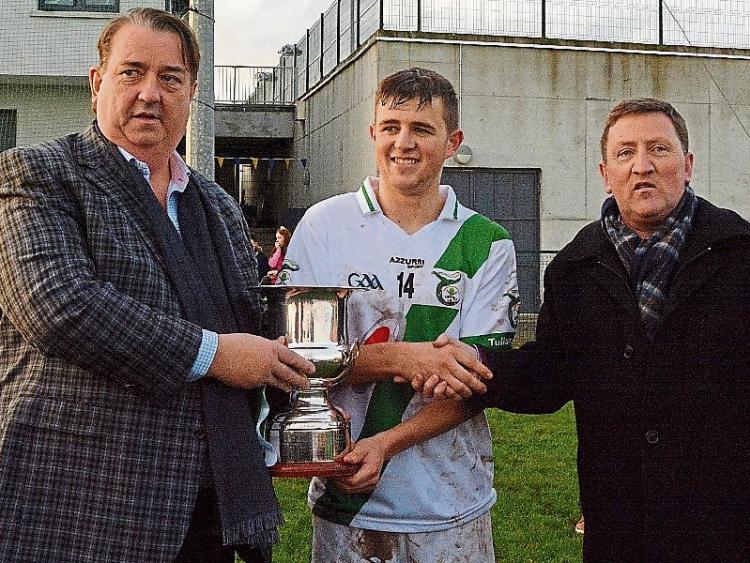 Tullaroan did a smash-and-grab job when thundering to a battling victory over Dunnamaggin in the Roinn B under-21 hurling championship final.

The Northern champions were full of exciting invention in attack during an all action, hugely impressive first half when Martin Keoghan (2), Bill Cuddihy and Jim Moore all grabbed goals.

There were times when they threatened to bury the opposition as they put in a strong all round effort to get them to half-time leading by a handy 4-3 to 0-7.

After that, Tullaroan registered a mere three points that proved enough as they held out against hard chasing Dunnamaggin in John Locke Park on Sunday.

Had the game gone on another few minutes, who knows what might have happened. With a little over a minute remaining and a gap of three points separating the teams, dogged Dunnamaggin threatened the winners goal.

The magnificent Eoghan Kearney, who was a driving and inspiring force for Dunnamaggin at centre-back, delivered to attack leader John Fitzpatrick as they raided at the country end.

Fitzpatrick off-loaded the ball to Ronan Coffey, but his sizzling drive from 12 metres on the left was brilliantly saved by goalie, Dylan Simpson.

The winners mounted one more raid, which produced a point from a 30 metre free by Eoghan Kearney, but that was it as far as the Southern champions were concerned.

Tullaroan had a late chance, which sub John Dooley put wide, but they had done enough to claim their second win in the championship to go with the one registered in 1998.

The losers will look at the scoring returns - 10 scores versus 16 - and wonder where they went wrong. A failure to stifle the creative talents of Martin Keoghan and Shane Walsh in the central positions in attack for Tullaroan during the first half proved costly.

Tullaroan were something of a goal creating machine during the opening period. The opposition received a warning after less than 30 seconds when Shane Walsh tested the Dunna’ goalie, Harry Walsh.

Ronan Coffey (D) and Martin Keoghan (T), in that order, traded early points. Tullaroan hit the goal trail in the seventh minute when Shane Walsh went on a powerful run through the heart of the opposing defence to set up a chance for Keoghan, who claimed a goal with a well struck low shot.

Two minutes further on a direct line run by Bill Gaffney ended with him passing the ball to Jim Moore inside the ‘14’, and the latter bagged goal No. 2.

In fairness to Dunnamaggin, they weren’t being over-run. At the other end Dara Keane engineered an opening, but Ronan Coffey’s sizzling drive was well saved by Simpson in the winners goal.

Eoghan Kearney (free), following a foul on Ian Walsh, and Luke Fitzpatrick picked off points which fairly reflected the general exchanges as Dunna’ cut the deficit to 2-1 to 0-3 by the 14th minute.

Next thing, Tullaroan goaled again. This time that bundle of trouble, Shane Walsh, punched a hole in the opposing defence.

Bill Cuddihy sent the green flag flying. Sean Buggy added a point, with the assist by the hard going Keoghan.

Ian Walsh pulled back a point for Dunnamaggin at the other end before Tullaroan snatched another goal. Martin Keoghan was the finisher this time, flicking a high delivery to the net from the edge of that square.

With the addition of points from Eoghan Kearney (D) and John Walton (T) the teams went in for the rest with Tullaroan leading by 4-3 to 0-7.

Dunnamaggin were a slow boil after the rest. Ray Cody registered an early minor for them. Shane Walsh registered via a free at the other end.

The losers had two scores from John Fitzpatrick to follow before a foul on John Walton at the other end saw Shane Walsh convert the free (4-5 to 0-10). When Bill Gaffney registered a point for Tullaroan, things appeared to be moving along nicely for them.

That turned out to be their last score, and there was nearly a quarter of an hour to go. Dunnamaggin nearly grabbed a goal in their next raid, but Luke Fitzpatrick’s shot from the right whistled across the face of the net and wide.

In the big hearted Eoghan Kearney, the losers had a man to keep driving them on. He converted three frees in-a-row to slice the divide to 4-6 to 0-13.

When Ray Cody won a 65 and the unerring Kearney put the ball over the bar, suddenly there was a maybe inserted into the equation. When Cody was fouled and Kearney found the target again, the gap was down to 4-6 (18) to 0-15.

By this time the clock was showing 58 minutes. There was still time for Dunnamaggin, but try as they might, they just couldn’t muster the scores to save the game.

Tullaroan, who did so well in the intermediate grade this season with a generally young team, earned a big prize to finish off the season. That they did so was thanks mainly to top performers like Shane Walsh, Martin Keoghan and Tommy Walsh, along with Jack Keoghan, John Walton and Sean Cuddihy.

NB - It is not often we make reference to the referee, good, bad or indifferent. We liked the easy hand Eamon Larkin had on affairs, and the way he let play flow. A good performance!