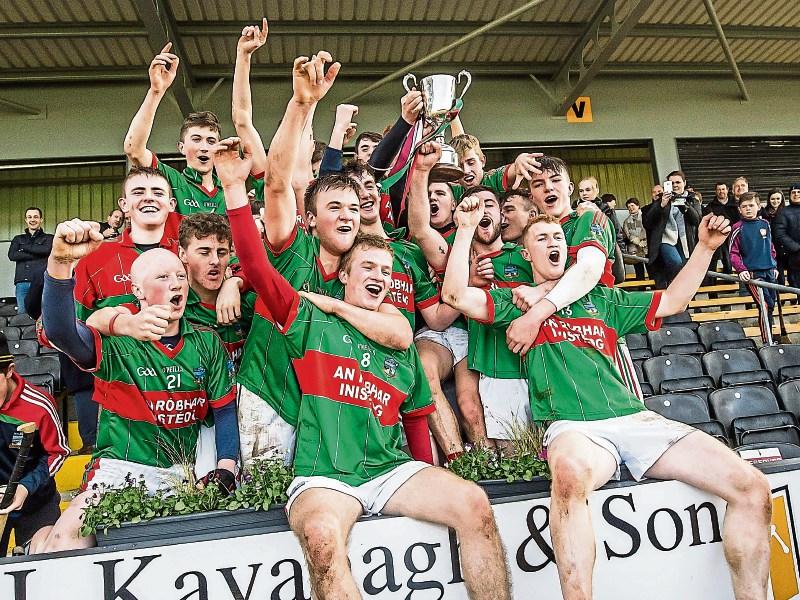 The Rower-Inistioge showed true champion qualities when coming from behind to snatch a thrilling win in a high class Kilkenny under-21 Roinn A hurling final.

After falling two points behind with a mere 30 seconds of normal time remaining, the Southern champions conjured up two fine scores to the value of four points to yank the spoils away from Dicksboro at Nowlan Park on Sunday.

First county panelist, Richie Leahy, galloped up the left wing towards the country goal, and from almost on the sideline and 30 metres range, he rifled a terrific shot released at full pace over the bar.

The winners puck-out was broken on the opposing ‘50’, and a quick pick up and delivery from Ciaran Ryan returned the ball towards the ’Boro square. Cathal Bolger stole in behind the last line of defence, and with the ’keeper advancing, he tossed the ball up in the air and batted it into the net.

It was game, set and match to the Rower, who claimed their third win in the championship to go with the ones registered back in the seventies, in 1971 and 1975.

“That was some win,” beamed thrilled Rower manager, Ger Morrissey afterwards. “They had to prove that they were made of good stuff. I saw Dicksboro play in the North final, and they looked really good.

“We kept drilling it into our lads that they would have to battle for 60 minutes. We have all seen games won and lost if complacency sets in. Hard work helped us beat a very good team in a good county final. It was dog-eat-dog throughout the hour.

“We got a big break when Richie Leahy scored a goal that brought us back into it immediately after Dicksboro had scored one.

“The ball fell right for him, and he applied a terrific finish. We fell behind again, but we never stopped chasing, never stopped putting in the effort.

“This is a great win for this group,” he added. “They won the minor A championship three years ago. They have this win to their credit now, so the victory sets the club up nicely for next year. If these lads stay at it, I think they can make an impact at a higher level in the future.”

The winners looked the better team during the early stages, and while there was plenty of drive in their play, they lacked consistency to keep the opposition on the run. Having said that, the ’Boro were good, and when they needed real battlers at times, they found them in Robbie Murphy, Conor Doheny, Evan Carroll and Robbie Fitzpatrick, whose involvement was ended by yet another hamstring injury.

The opening four points were shared evenly, and then   the deadly striking David Kelly punished a foul on Diarmaid O’Brien to edge the Rower 0-3 to 0-2 in front. For a while, the winners got on top.

By the 19th minute they were 0-7 to 0-3 clear thanks to additional points from Kelly, Jim Ryan, a first time pull on a dropping ball that could have ended in the net, Kelly again and Diarmaid O’Brien, after a sensational 60 metre run through the heart of the ’Boro defence by Leahy before he released the ball to the scorer.

Minutes later the ’Boro had a half chance of a goal when Robbie Murphy flashed in a fast ball from midfield. However, luck was out on Edward Moylan, and the ball fell from his grasp as he  attempted a catch inside the full-back line.

Oisin Gough and Chris Kavanagh hit back for points for Dicksboro as they got on top as the interval approached. When Kevin Kenny scored a magical point from a bad angle on the right, inside the 20 metre line, the gap was down to the minimum (0-7 to 0-6).

A late foul on Cathal Bolger earned the Rower a free which was converted by the keen eyed Kelly to leave them leaders by 0-8 to 0-6 at half-way.

Both sides missed chances during an untidy spell early in the new half, but by the 40th minute the ’Boro had produced two scores per Gough and Robbie Murphy to leave it all square at 0-8 each.

When David Kelly converted a free at the other end, following a foul on Leahy, it was replied to by the excellent Gough after Chris Kavanagh had been fouled (0-9 each).

At the end of the quarter the ’Boro were awarded a questionable penalty when a defender appeared to foul the ball. Whatever the call was for, the referee gave a penalty after consulting with his umpires. Wing back Aidan Nolan buried the ball in the net.

Within two minutes the Southerners were back level. The dynamic Pat Lyng punched a hole in the losers defence, and from a bad angle on the right he blasted a low shot at the target.

Goalie Darragh Holohan did well to blocked the shot, but the ball ran free and the lurking Richie Leahy did really well to flash it back into the net while falling (1-9 each).

It was step for step from there - 1-10 and 1-11 each - before Stephen Farrell won a tough ball in front of goal and shrugged off two tackles before shooting the ’Boro in front in the 58th minute. When Robbie Murphy set up Conor Doheny for a pop at goal from midfield 30 seconds later, the title looked City bound when the latter's strike sailed over the bar.

With the clock edging towards the 60 minute mark, Leahy score a stupendous point from the left wing before Bolger, who had threatened a few times earlier, plundered the goal that decided the match.

Heroes? There were plenty, with David Kelly, Pat Lyng, Richie Leahy, Jack Walsh, Michael Galavan and Tom Doyle really doing the business for the winners.  Along with those already mentioned, the winners had  Oisin Gough, Aidan Nolan and Chris Kavanagh.