Free taking didn't faze him - so no need for harsh routine

One easy shots, that was sum total of practise 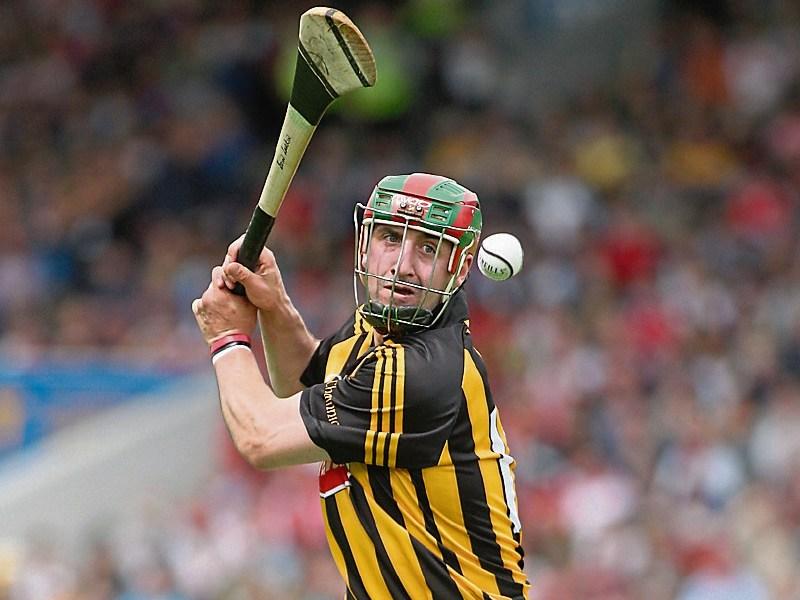 Practise makes perfect, or so we are led to believe. But the opposite was the case with retired Kilkenny hurling star, Eoin Larkin.

The more he practised frees, the worse he became at them. So he packed it in.

Larkin was a fair scoring detail, form play and frees, with Kilkenny and his beloved James Stephens. On and off he took frees for club and county, and invariably he had the golden touch.

Two days of high returns that he enjoyed particularly during his career were the All-Ireland club final of 2005, when he shot nine points (five frees) in the defeat of Athenry (Galway). Another was the replay win in the county senior final of 2011, when he ran up a staggering 1-11 (eight frees) as The Village beat Ballyhale Shamrocks.

“I didn’t see it as a big deal to be taking frees or not,” Larkin revealed when we met to chat about his career following his retirement from the inter-county game. “Whatever people felt was right for the team was okay with me.”

Golfers are known to be heavy into routine and practise. Likewise place kickers in rugby, football and so on. Snooker players practise over and over and over. Larkin? Naw, he wasn’t into that.

“I practised for a while,” he revealed as a mischievous grin swept across his face.

“They weren’t going too well. I stopped practicising and then they started going over. I never practised a free after that.”

But even better was to come: “I used to practise one free in the club before every match. We would meet as a group in the clubrooms before going to matches. I would put the ball on the 21 right in front of goal before heading to the ’Park, the Bridge or wherever.

He was a free taker for the best part of 10 seasons with club and/or county. Laborious practise never caught hold of him.

“We were always blessed with great free takers in Kilkenny,” he added. “I wasn’t one of them.”

The pressure on frees never bothered him, he insisted.

“I never saw standing over a free as pressure,” he assured. “I just stood over the ball and tried to get the strike right. I was lucky enough, a lot of them went over.”

Larkin exited the inter-county stage with a golden take of eight senior All-Irelands; six National Leagues; two All-Star awards and lots, lots more. He was Texaco Hurler of the Year in 2008.

But like many a youngster, his introduction to the game was simple.

Adults making a bit of a fuss about things can be the pathway along which youngsters are attracted to games.  Ask Larkin, big time hurler, big time winner.

He recalled times when he and a batch of wide-eyed youngsters marched around the James Stephens grounds in Larchfield behind a man carrying a megaphone through which the National Anthem was blaring. It was Sunday morning Streets League final time.

The scene setter, the man leading the pre-match parade, was none other than former club player and referee, Sean Brennan, who organised the ’Leagues with Michael Slattery.

“I couldn’t thank enough lads like them,” Eoin insisted. “Those games were my All-Irelands at the time. I couldn’t sleep on Saturday nights with the excitement of those games. The boys made them so enjoyable for everyone. They were great men.

“That was like Croke Park to us. We gave it everything. Taytos and orange afterwards. Those are my great memories growing up in the club.”

At school the start was in St Patrick’s De La Salle, where a Mr B. Cody taught him in Sixth Class. He moved on to St Kieran’s College where, as he put it himself, he “lasted three years” before becoming a cabinet maker. His next change was into the Army, where he served 12 years.

Larkin played in goal for James Stephens at under-age level. However, a missed catch which led to the concession of a goal and a loss in a county final, finished his interest in that department.

He went to the selectors afterwards and told them he wasn’t playing in goal any more. They warned him he  might not get a place out field. He asked for the chance to prove himself, and the rest, as they say, is history.

He didn’t start in the minor championship that followed. The Village were being beaten in a game, and one E. Larkin was brought on in attack. He nearly changed the match. ’Stephens still lost. He had made his point.

“From an early age I hated losing,” he said as he continued the story. “That was a big thing with me. I hated the feeling of losing. I never got to like it. I don’t ever want to get to like it.

“I learned to live with it this year, but before that, I could be in bad form for weeks if I hadn’t a match or training coming up to help me get over the disappointment.”

This year it was different after the All-Ireland defeat against Tipperary. He didn’t know why exactly, but maybe he felt he had to be strong for the sake of the younger players. He was the oldest player on the team.

“I could see the hurt,” he reminded when he swept us back to September. “Cillian Buckley was distraught. He had never lost an All-Ireland since he came in. I had an idea of how he felt. That was a brilliant way for him to be. If he can bottle that hurt it will benefit him in the future.”

The Larkin name is synonymous with Kilkenny hurling, with Paddy, ‘Fan’, Philly all jersey holders before him. He never thought about it. He got on with being who he was. Okay, he was a Larkin.

“I am Eoin Larkin,” he said by way of explanation. “I never let it weigh me down. I got on with being me, and the best I could be.”

He told a lovely story about Phil ‘Fan’ and his attempts to get Eoin to change his grip on the hurley from the unorthodox left over right to the straight grip.

And so we began to talk about this and that.

He offered: “Certain parts of that hang on me. The build up does. I think we took our eye off the ball. Henry (Shefflin) and Tenno (John Tennyson) were injured. At the time we were delighted to have the chance that they might play.

“The ‘will they, won’t they play?’ talk over the weeks played against us. Everyone was asking us. We didn’t know. We took our eye off the ball there. That sort of thing wouldn’t happen now.

“There were stages in that game when we could have taken Tipp. We didn’t. They were up for it. Why not? We had taken something on them the year before.”

“No regrets whatsoever,” he assured. “I gave everything I had. I was part of teams people could only dream about. I won eight All-Ireland medals; two All-Stars.”

How difficult was it to maintain enthusiasm?

“It wasn’t hard because I loved what I was doing,” Eoin assured. “I enjoyed training and the matches. As the years went on I enjoyed keeping myself in shape, knowing I was able to play to my maximum because my condition was tops.

“The weekends we trained away I always enjoyed because we were so driven on them and the focus was absolute.”

“In about 2008 I picked up a hurley at training belonging to J.J. Delaney. I fell in love with it. I rang Mark Dowling (Star hurley maker) and said I wanted them the same weight, shape, the whole lot. I never changed after that.”

He had played for three years on the inter-county stage with a stick that didn’t really suit his style. He always had three or four made to measure hurleys on standby after that. He stuck them in the boot of the car, and used one until it broke. Then it was on to the next, the next, the...

“The J.J. hurley was the fit for me,” Eoin continued. “I was able to get a good strike with it. It was a good hurley to take up, wasn’t it? It must have suited lefties down to the ground.”

Tommy Walsh he regarded as the best ever. He had skill. He had fire. He didn’t care who came on top of him. He spent his career marking him.

“We often had a few rows, but we are great friends,” he assured.

He also admired Jackie Tyrrell for the way he went about his business; Henry Shefflin and J.J. Delaney too, and that very under-rated player, Aidan Fogarty.

There was one last story. It involved Delaney, and contesting high balls against him.

“It came to the stage in training where I would be looking at high ball coming in and I would just say ‘Oh, no’,” he smiled, hinting something else was to come. “I stopped trying to catch ball against him. You couldn’t.

“An arm, the hurley or something would come across you. I started to let him get in front, and doing what he used do to me. ‘You can’t do that,’ he barked at me one day. I told him he was doing it for years and he was getting away from it.”

“I wanted to be him when I was young,” he admitted.

Clubmates Philly Larkin and Peter Barry were players he admired greatly too.

What about the future, and a role in management? He wouldn’t rule it out. He was a selector at under-21 level with the club some years back,  and he enjoyed the experience.

“If an opportunity comes, we will have a look at it,” he admitted.

Of the final parting he admitted: “There are no great regrets, but there is a heavy heart.”