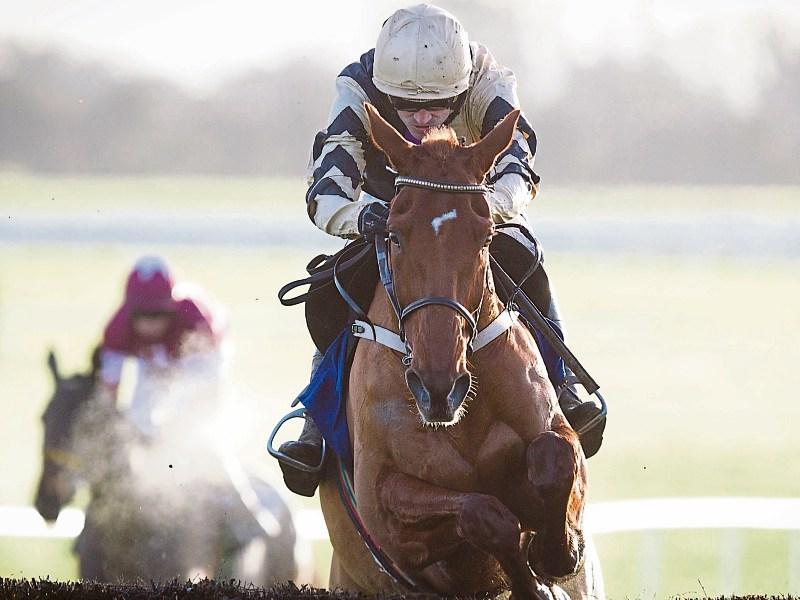 It was a winning debut over fences for Yorkhill at Fairyhouse on Saturday. Ruby Walsh was aboard.

The nine-year-old suffered a tendon injury while being prepared to run at Punchestown in April, but Elliott reports him to be making steady progress in his recovery.

Elliott is keen to give Don Cossack a relatively low-key return, with the Grade Two event at Gowran one of his preferred options at present.

Third in the Grade 1 Herald Champion Novice Hurdle at the Punchestown festival in April, the 12/1 chance ran out the easiest of winners under the hefty burden of 11st 11lbs.

Gordon Elliott was once again the man to follow at Navan on Sunday where he saddled four of the seven winners.

Only three weeks after he won an astonishing six races at the Meath venue, Elliott dominated again and landed the Grade 2 Navan Novice Hurdle with 6/4 chance Death Duty, one of two winners on the day for Bryan Cooper.

The Grade 1 Lawlor’s Hotel Novice Hurdle at Naas in two weeks’ time is the immediate target for the promising five-year-old who had little difficulty in accounting for Monalee and evens favourite Invitation Only.

Elliott and Cooper also took the 2m4f handicap hurdle with 8/1 chance Automated while Barry Geraghty did the steering as 6/4 favourite Glenloe took the 2m7f maiden hurdle for the Longwood-based trainer.

Elliott teamed up with Jamie Codd to land the Listed bumper with 1/3 favourite Samcro who just got the better of his main market rival Good Thyne Tara.

Willie Mullins and Ruby Walsh took the opening 2m maiden hurdle with the gambled-on 5/4 shot Cilaos Emery, while over fences, Total Recall took the rated novice chase for Sandra Hughes and Roger Loughran at odds of 9/2.

The Gerry Keane-trained Effernock Lad and Edward Cawley’s Flemenstorm shared the spoils when dead-heating in the 2m1f handicap chase. The winners were partnered by Mark Flanagan and Sean Flanagan respectively.

Back Before Dawn gave Curragh trainer Sandra Hughes an across-the-card double when running out one of the easiest winners of the weekend in the Molony Cup Handicap Chase at Thurles on Sunday.

Ridden by Conor Brassil, the 10/1 chance could have been called the winner a long way from home and he stretched clear going to the final fence to beat Garrai Phaidin as he liked.

Jockey Eamonn Corbett added to his Fairyhouse success 24 hours earlier with a double. He took the opportunity handicap chase on Templemore trainer Bill Harney’s 16/1 chance The Conker Club and followed up on Charlie Stout, a 5/2 shot, for Clane trainer Shane Nolan in the 2m handicap hurdle.

Paul Townend had an easy time of it on the Willie Mullins-trained 4/7 favourite Royal Caviar in the beginners’ chase but luck deserted the pair as 4/11 favourite Asthuria fell three from home in the Listed mares’ novice hurdle leaving the way clear for 5/2 shot Shattered Love to win by all of 37 lengths for Gordon Elliott and Jack Kennedy.

The father and son team of Philip and Luke Dempsey landed the rated novice hurdle with 15/8 chance Teacher’s Pet, while Finny Maguire brought newcomer One First Cut home the clear winner of the bumper for Crossabeg trainer Liz Doyle.

Yorkhill, one of last season’s leading novice hurdlers, made a winning start to his career over fences with a runaway success in the 2m beginners’ chase at Fairyhouse on Saturday.

Trained by Willie Mullins and ridden by Ruby Walsh, the six-year-old was sent off a 1/8 favourite and, despite jumping to his left, came home a 14 length winner from Burgas.

Yorkhill was the only successful favourite on the day but there were a couple of well-fancied winners including Minella Till Dawn, who won the 2m4f maiden hurdle at odds of 5/4 for Gordon Elliott and Mark Walsh.

A Genie In Abottle, trained by Noel Meade and ridden by Bryan Cooper, was sent off the 2/1 second favourite for the 3m beginners’ chase and he had little difficulty in accounting for Blazer and 9/10 favourite Mall Dini.

Bookmakers had the best of it earlier on the card as Prospectus won the three-year-old maiden hurdle at odds of 16/1 for Gavin Cromwell and Jonathan Moore  while 10/1 shot All The Chimneys won the 2m handicap hurdle for Cloughjordan trainer Willie Austin and Eamonn Corbett.

There was a second 10/1 winner on the day in the shape of Awayinthewest, but there was no cheer from the betting ring for Pat Fahy’s filly, who was backed from 20/1 and won easily under Richie Deegan.

Based with trainer Garvan Donnelly, she partnered the Damian English-trained 8/1 chance Geological to a narrow win in the 6f handicap. English was completing the first double of his career as Dance Alone, a 6/1 chance, had earlier won the 7f apprentice handicap under Donogh O’Connor.

There was further success for the Royal County when the Peter Casey-trained Chosen Rock and Sean Davis won over the same distance. Another apprentice rider on the mark was Donnacha O’Brien, who teamed up with his brother Joseph to take the 12f handicap with 12/1 chance Song Of Love.

David Marnane and Connor King won the 5f conditions’ race with the gambled-on 2/1 joint-favourite Alfredo Arcano, who denied the O’Brien brothers’ Duplication by a neck.

Henry de Bromhead enjoyed his third all-weather win when the Pat Smullen-ridden Daybreak Boy, a 7/1 chance, ran out a ready winner of the 8f maiden.

The handicap over the same distance was divided and resulted in success for the Jim Bolger-trained 5/2 favourite Cresendo who won the opening leg under Kevin Manning. Pat Martin’s Easy Boy  took the second division at odds of 4/1 joint-favourite.

Dungarvan legend John Kiely was among the winners at his local Tramore racecourse on Thursday when he won the 2m5f maiden hurdle with Brave Out.

Ridden by Denis O’Regan, the 13/2 chance ran out a comfortable winner and will now go handicapping.

Willie Mullins and Ruby Walsh were responsible for the easiest winner of the day as French import Camelia De Cotte, the 1/5 favourite, recorded a 15 length success in the opening mares’ maiden hurdle.

Eoin Doyle and Brian O’Connell landed the 2m handicap hurdle with Ardera Cross who won at odds of 10/1. Christy Roche and Mark Walsh took the beginners’ chase with the well-supported 5/1 shot The Living Beauty while Ask Susan took the bumper at odds of 100/30 for  trainer John Nicholson and Laura Hourigan.

A race at the Limerick Christmas festival is the aim for Sea Scorpion who won the 2m5f handicap hurdle for Liz Doyle and Sean Flanagan at odds of 7/2 favourite. Fluspar, the well-backed 2/1 favourite, won the handicap chase for Clare-based Danny Howard and Danny Mullins.