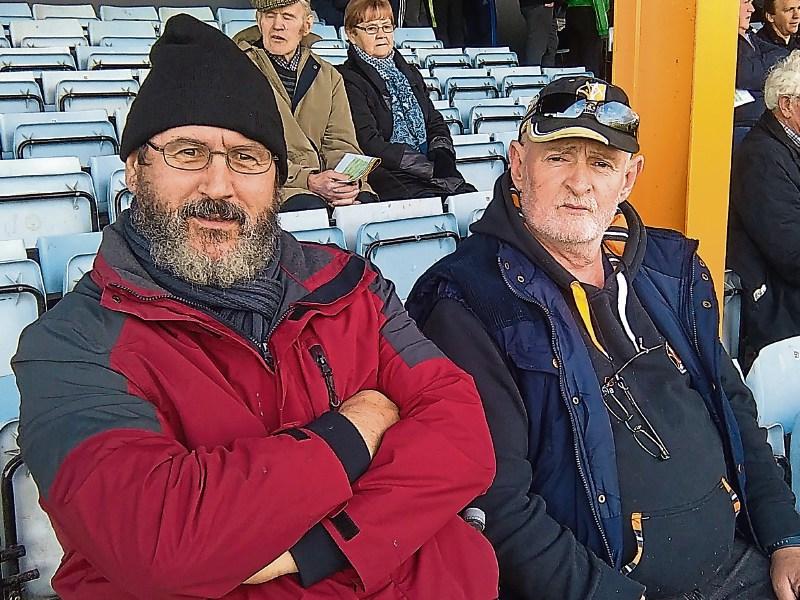 Nick Tyrrell admits to having an addiction, but he isn’t looking for a cure.

“Sure why would I,” he asks as a warm, mischievous  smile sweeps across his bearded face. “I am having fun, lots of it.”

He is Wicklow born and bred and lives in Donard, but he is fanatical in his devotion to  Kilkenny hurling.

No matter where  Kilkenny are playing,  Nick is there. And he could attend over 70 club games a season in various part of the county as he motors up and down the M9 to indulge his passion.

“I have a fascination with Kilkenny hurling since 1963 when Seamie Cleere was captain,” he explained when we bumped into each other yet again, this time in Callan at the under-21 Roinn B county hurling final between Tullaroan and Dunnamaggin.

Earlier he had attended the Roinn A final in Nowlan Park between the Rower-Inistioge and Dicksboro.

He has no affiliation with any of the clubs. He was merely doing his thing - following Kilkenny hurling.

“I don’t know what the fascination is with the game,” he admitted. “I  just love hurling since I was a child.”

He played the game  with  Hollywood and won  a Wicklow junior championship in 1978, but hurling  is not big there, and certainly not in the  West  of the county where he lives.

And so he feeds his passion by  travelling  to Kilkenny, a journey he has been making  for years and years.

He started out working on the buses in  Dublin.

“It cost me a fortune to follow Kilkenny then,” he smiled. “I used to lose a double day’s pay on a Sunday to go watch Kilkenny playing in Croke Park or where ever.”

Then he emigrated to  America in 1989. He spent 14 years there, living  in Brooklyn, New York.

He maintained the connection, travelling home every time the Cats were in an All-Ireland semi-final or final.

“I never thought about the cost, it was just something I wanted to do,” Nick explained when he recalled  the trans-Atlantic hops.

Since he returned to Ireland and Wicklow, the Kilkenny connection snowballed and now his  is a well recognised face at club matches.

Every game involves a journey. His home is about an hour’s drive from Nowlan Park.

The routine for the double under-21 dish on  Sunday week was typical. He went to Mass on Saturday evening.

The plan on the Sunday was to hit Carlow early and do a bit of  Christmas shopping. He was too early. None of the shops were open!

Having hit the road at 8.45am he arrived in   Nowlan Park for the first match at around 11am, complete with flask and sandwiches to keep him going.

His  wife, Bernie, who hails from Louisbergh in Mayo,  doesn’t have to ask anymore. She knows the routine.

His  daughter,  Alison (13), is usually with him. Not this time. The  local choir, of which she is a member, was preparing for a Christmas event at which she will sing solo.

Nick didn’t miss a weekend in Kilkenny since the All-Ireland final. Regularly he hits games on Saturday, and on Sunday too.

“I could see  three or   four matches a weekend,” he explained, planning his schedule around the  fixtures list on the GAA website and in the ’People, which is kept for him in the local shop.

The  local priest overheard the request one day, and was curious. Nick explained to him that “he had his Bible, and I have mine”.

He simply loves  hurling. He would watch football on the telly, but he wouldn't go out of his way to get to games.

“I would go anywhere to watch  hurling,” he insisted.

His favourite club team? Since 1963 he has a grá for Bennettsbridge, drawn by the admiration of Seamus Cleere.

When Bennettsbridge  won the junior All-Ireland final 2015 in Croke Park he drove from Cork that morning to see the game.

Kilkenny played Cork in Pairc Ui Rinn the previous night in the National League. He was there.  He hit Dublin and Croker the next day.

So, how was he going to get a fix over Christmas, we wondered?

“Three weeks,” he piped up. ”There are three Sundays when there is no hurling,  the 18th, 25th and January 1st.

Nick works as a  maintenance man. His employer knows the scores - there is no use looking for him when  there is a hurling game on.

“There is no cure for what I have, and I am glad,” he beamed.

Okay, so who are the best he has seen?