A season filled with marvellous memories for Cup hero Maguire 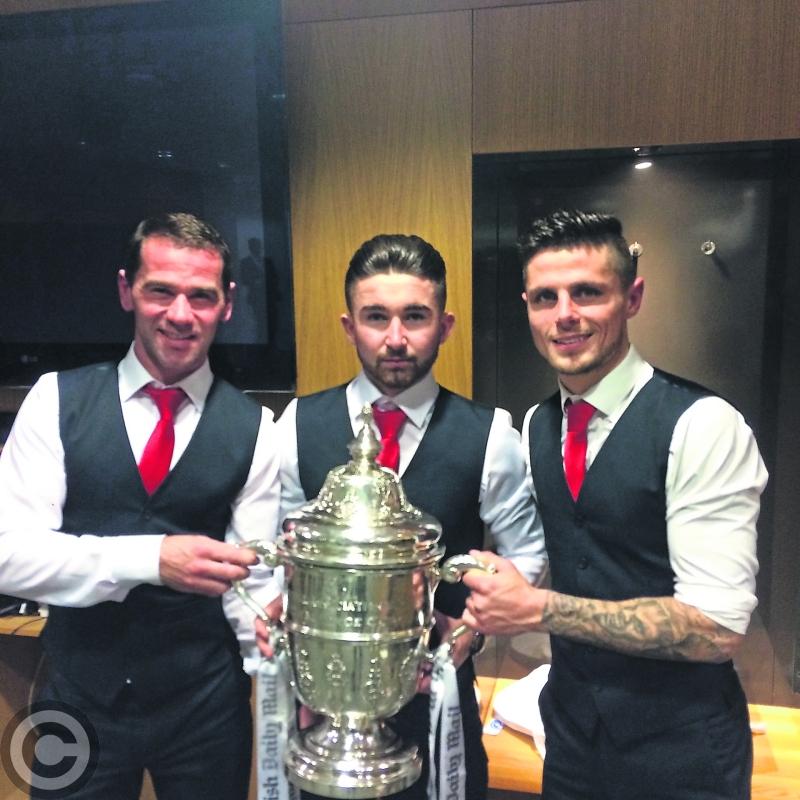 Top goalscorer in Ireland. Young Player of the Year. FAI Cup match-winning hero. It’s fair to say Seanie Maguire had his share of the spotlight over the past season.

The Kilkennyman has turned gloom into goals, frustration into fame as he spearheaded Cork City’s charge to the FAI Cup title. It’s been such a success that even Maguire himself can’t believe it’s true.

“When I first came down to Cork I couldn’t have dreamed of having the season I did,” he said, reflecting on the 2016 campaign.

“Winning the FAI Cup and finishing second in the League, although that was disappointing the way it ended, meant it was a good season for the team and for me personally.”

Maguire is downplaying the achievements that have turned him into a fans favourite at Turners Cross. He ended the season as the top goalscorer in the League of Ireland’s Premier Division, hitting the net 18 times, a run of form which saw him named in the Team of the Year and earn the Young Player of the Year award.

The 2016 season was light years away from the 2015 campaign, a lonely time spent in the shadows at Dundalk.

Maguire felt the need to move. Cork City came calling. He was on his way.

“On the outside people may have seen the move as something of a gamble from John Caulfield (Cork City manager) – I’d be the first to admit it was,” he said. “I didn’t get the chance to play at Dundalk, but when I met John he told me he’d give me the opportunity to play – it was up to me to take it.”

Maguire seized upon the chance, undergoing a punishing preseason regime of his own before Cork started their preseason.

“I trained hard over the Christmas and did a lot of offseason programmes,” he said. “It helped that when I went down to Cork for preseason I felt fitter than everyone else.

“ I started the season well, scoring in the President’s Cup (a preseason opener against Dundalk). To score on my debut was something of a dream start. It kicked on from there.”

Things got even better for Maguire. After opening his League account with a brace against Bohs on the first day of the season, the goals began to flow. However, it was after the midseason break that he really found his form.

“I had a spell where I scored 10 League goals in 11 games,” he said, reliving his purple patch. “It felt like every time I stepped out on the pitch that I knew I’d score.

“There was a stage where I hit four in four for Cork, then I went away with the Republic of Ireland under-21s. I came on for literally a minute against Slovenia and scored, then played 15 minutes against Serbia and scored as well – it was mad!

“Then, when I came home, we had a Cup game against Shamrock Rovers,” he recalled. “We won 5-0 and I scored a hat-trick. It felt like every game I was going in to I could see myself scoring. 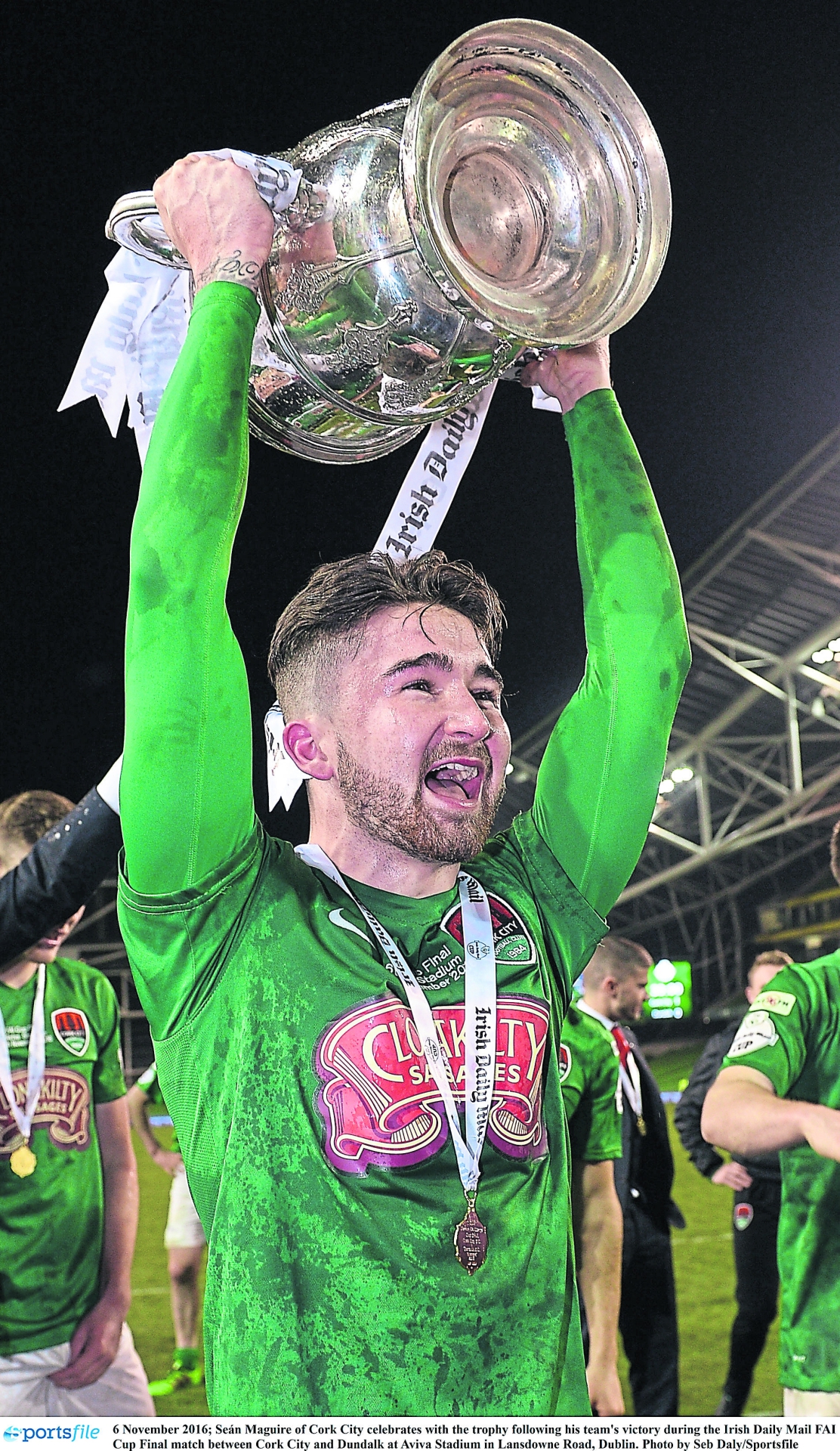 “The team was doing well at the time; we were on a great run so it seemed like every half-chance that came my way I was going to score from it. It was strange for me as, being a striker, I had never felt that way before.

“Strikers thrive on confidence, so when it happens you enjoy the game even more.”

Maguire took that goalscoring form into Europe during the season too. He hit the net in both legs against Linfield, then scored for a third successive game away to Swedish side BK Hacken.

City reached the final round of Europa League qualifiers, but heartbreak came when they crashed out to Belgian side Genk.

City had been thriving on three fronts at one stage, but suffered after going out of Europe. It was that stage, Maguire reckons, where their charge for the League title faltered.

“It was after we got knocked out by Genk that our form suffered,” he said. “We played three League games in a row and didn’t win any. We lost to Sligo, went up to Derry and got a draw and then drew with Bohs at home. It was almost like a European hangover.”

That slip allowed an experienced Dundalk to strengthen their grip on the title, even more so after they beat Cork 2-1 in Oriel Park back in October. Although City won three of their remaining five league games after that, an experienced Dundalk were in pole position and didn’t let up as they secured their third title on the spin.

That said, City did gain some compensation when they beat Dundalk in the Cup final with a goal in the 120th minute from you-know-who...

“It was brilliant,” Maguire recalled. “We played Dundalk five times over the season and beat them on four occasions. Losing out on the League was disappointing, but we were determined in the build-up to the Cup final that we would win.

“It wasn’t my best game, I’d be the first to admit that, but I’ll take that all day if it means scoring the winner.”

“There is no better feeling than seeing the ball hit the net,” he said. “I think it took about 10 seconds to get there, but as soon as it did I had the shirt off and was racing away!

“It shows you how tight a group we are too,” he said of the bedlam that surrounded the goal. “The whole bench, with the exception of the manager, jumped on top of me in celebration. It was the stuff of dreams.”

And the feel-good factor continued when the team made their way back to Cork.

“The homecoming after the final was surreal,” he said. “Thousands came out on to the streets of Cork to greet us. It was the best feeling in the world - it shows how much that win meant to the people of Cork.”

Winning the Cup has given Cork the confidence to push on and challenge for the League title in 2017. Several new signing will be joining the Rebel Army at Turners Cross, players Maguire believes will help the team progress.

“We will build on last season and become even stronger,” he said. “John (Caulfield) has brought in more players to strengthen the squad.

“The newcomers include Kilkenny’s Jimmy Keohane, who will be a massive player for us as he can play in numerous positions,” said Maguire.

“Jimmy will be a big player for us, as will Conor McCormack - in my opinion he was Derry City’s best player last season - and Achille Campion from Sligo Rovers. He gave two of our centre-halves huge problems last season so I’m sure he’ll be big for us.”

The signings are a statement of intent - Cork are gunning for that League title next season.

“The goal is to try and do what Dundalk did last season,” said Maguire. “We want to progress, which is why I signed with Cork again for 2017. We’d love to win a double and to go further in Europe than we did this year.”