Freebooters B blast into 2017 in style 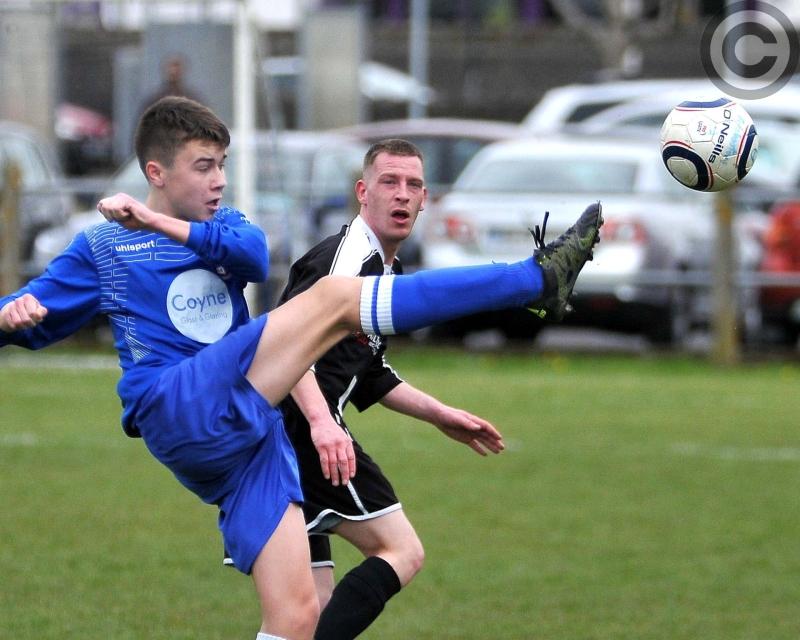 Andy Walsh was on target for Freebooters B in their Premier Division win over Stoneyford United. Photo: Michael Brophy

The Freebooters B team kicked back into Premier Division life in winning fashion as they started 2017 in style.

The Blues showed no signs of rust as they took all three points from their first game in over a month with a 3-1 win away to Stoneyford United on Sunday.

The honours were even in the first half, where Damien Raggett and Ryan Maguire struck for their respective teams to leave the sides locked at 1-1.

The change came in the second half, as ’Booters stepped up their attack. Shane Kelly made it 2-1 for the visitors, who also spurned the chance to add to their lead when they missed a penalty, but they struck again when Andy Walsh nabbed a third to seal their third win of the campaign and avenge the 2-0 loss they suffered to United earlier in the season.

The Division One campaign took a few twists and turns over the weekend, with Fort Rangers bringing Deen Celtic A’s 100% record to an end. The strange results weren’t limited to Wallslough, as leaders Highview Athletic dropped their first points of the season in a 2-2 draw with Clover United.

Things could have been much worse for Highview, who trailed 2-0 at one stage in Rathdowney.

The home side exploded into action, forcing Athletic on the back foot as strong attacks produced goals for Adrian Maher and Mark Treacy.

Things changed when United were reduced to 10 men in the second half, giving Highview space they exploited.

Sheamie Kavanagh came to his side’s rescue, bagging a late brace to secure the point that leaves the Graig side level at the top with Clover, albeit with three games in hand. Deen Celtic A are four points behind the leaders, but have games in hand on both.

There was a big move at the other end of the table, as the Lions A took all three points in their 4-2 win away to Newpark. Michael Dooley led the way with a hat-trick for the Durrow men, who also had Steven Dowling on the scoresheet.

The win, only their second of the campaign, saw Lions leapfrog Newpark in the table - Newpark are on six points, two ahead of bottom two Thomastown United B and Bridge United.

Evergreen C boosted their chances of promotion from Division Two when they beat St John’s 8-2 in their Sunday morning city derby.

Led by a Kevin Ireland hat-trick Evergreen roared into life in the first half. They were 6-1 up at the break, Ireland’s haul following on from other goals by Dacel Fwamba, Chris Aylward and Cormac Hogan.

They eased up in the second half, but made sure of their biggest win of the season with more goals from Pa Leahy and a second from Hogan.

Evergreen are now second in the table, just three points behind leaders Castlewarren Celtic, who dropped points after they were held to a 1-1 draw by Brookville. Elsewhere St Ann’s eased their relegation woes with a 1-0 win away to River Rangers.

Mark Tobin’s goal leaves them on 10 points, one ahead of St John’s and three clear of bottom side Paulstown 06, who picked up their first win since the opening day of the season when they beat Callan United B 2-1.

Ormonde Villa’s good form this season continued as they kept pace in the race for the Division Three title.

The city side sparkled on Sunday as they beat Evergreen 46 9-1 on the Kells Road.

Aidan Nolan was the man of moment for Villa, helping himself to five of their nine-goal haul. Aaron McDonald, David Barry, Liam Walsh and Michael Kennedy also hit the net, giving their side the win that leaves them four points behind table-toppers Ballacolla with a game in hand.

Deen Celtic B also kept their name in the hat for promotion with a 3-1 win at home to Clover United B. Johnny Dowling (2) and Jimmy Daly did the trick for Celtic, who lie three points Villa in third place.

Finally, it was a good day also for Highview Athletic B, who made it two wins from three when they beat Thomastown United B 3-1.

Richard Foley, Dane Flood and Ian Kavanagh were on target as Athletic took the spoils in the derby with their near-neighbours, who are still looking for their first win of the league campaign.