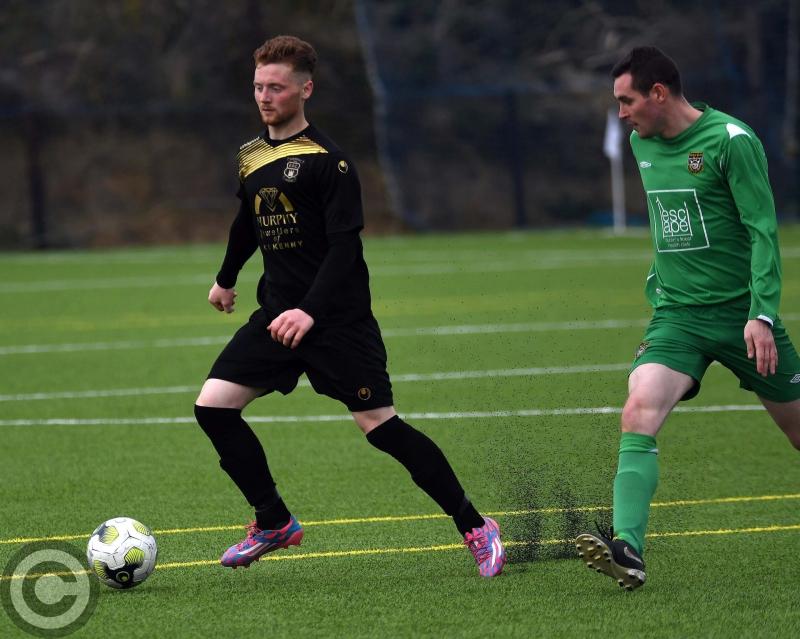 Conor English was on target for Evergreen on Sunday, hitting the net twice as the city side beat Newfoundwell in the FAI Junior Cup. Photo: Michael Brophy

The chase for promotion from Division One took another twist as Clover United stumbled in their race to the top.

The Rathdowney men missed the chance to return to the top of the table on their own, and coughed up some Laois pride when they lost 2-1 to local rivals Lions on Sunday.

An own goal and one for Lee Campion did the trick for the Lions, who have now won two games on the spin for the first time this season.

The Durrow men have had a wretched time of it in the 2016/17 campaign, taking just two points from their opening five games but they seem to have turned the corner lately with three wins from their last four games.

Things are little more worrying for Clover, who charged up the table with three wins and two draws in their first five games.

A 2-2 draw with Highview Athletic A last time out means they still share first place with the Graignamanagh side but with four games in hand Athletic will be able to put real daylight between the sides.

Clover’s predicament is all the more perilous as Deen Celtic A continued their promotion charge with a 2-1 win over bottom side Bridge United on Sunday morning.

Having lost their 100% record to Fort Rangers last week the Castlecomer side were determined to get back to winning ways, but had their work cut to get the better of a resolute Bridge side who defended stoutly early on.

Celtic persisted, and finally broke the deadlock after the half hour. Mark Delaney and Richie Lynch created the chance with a well-worked one-two, giving Delaney time to whip in a cross for Eoin Brennan to head home at the back post.

Bridge United fought back into the game in the second half, drawing level from the penalty spot on the hour. The hosts pressed for more, bringing some good saves from Robbie Lynch, but came unstuck when John Doheny unleashed an unstoppable shot from the edge of the box with 80 minutes on the clock.

It was a good day also for Fort Rangers, who continued their impressive start to 2017 with a 4-1 win away to Thomastown United B.

A brace for Eddie Nugent, coupled with goals from Paddy Hogan and Conor Bergin, did the job for Rangers, who have really turned the corner.

The result, when coupled with last week’s 3-1 win over Deen Celtic A, means Jim Nugent’s side have taken more points in their last two games (6) than the five gained (one win and two draws) in their first seven of the season!

River Rangers grabbed three points in smashing style as they fought back for a win in a game of two halves.

Played at the Paircin it seemed as if home advantage would count for nothing as they trailed Brookville 3-0 at the break, but a fabulous four-goal recovery saw the hosts prevail 4-3. 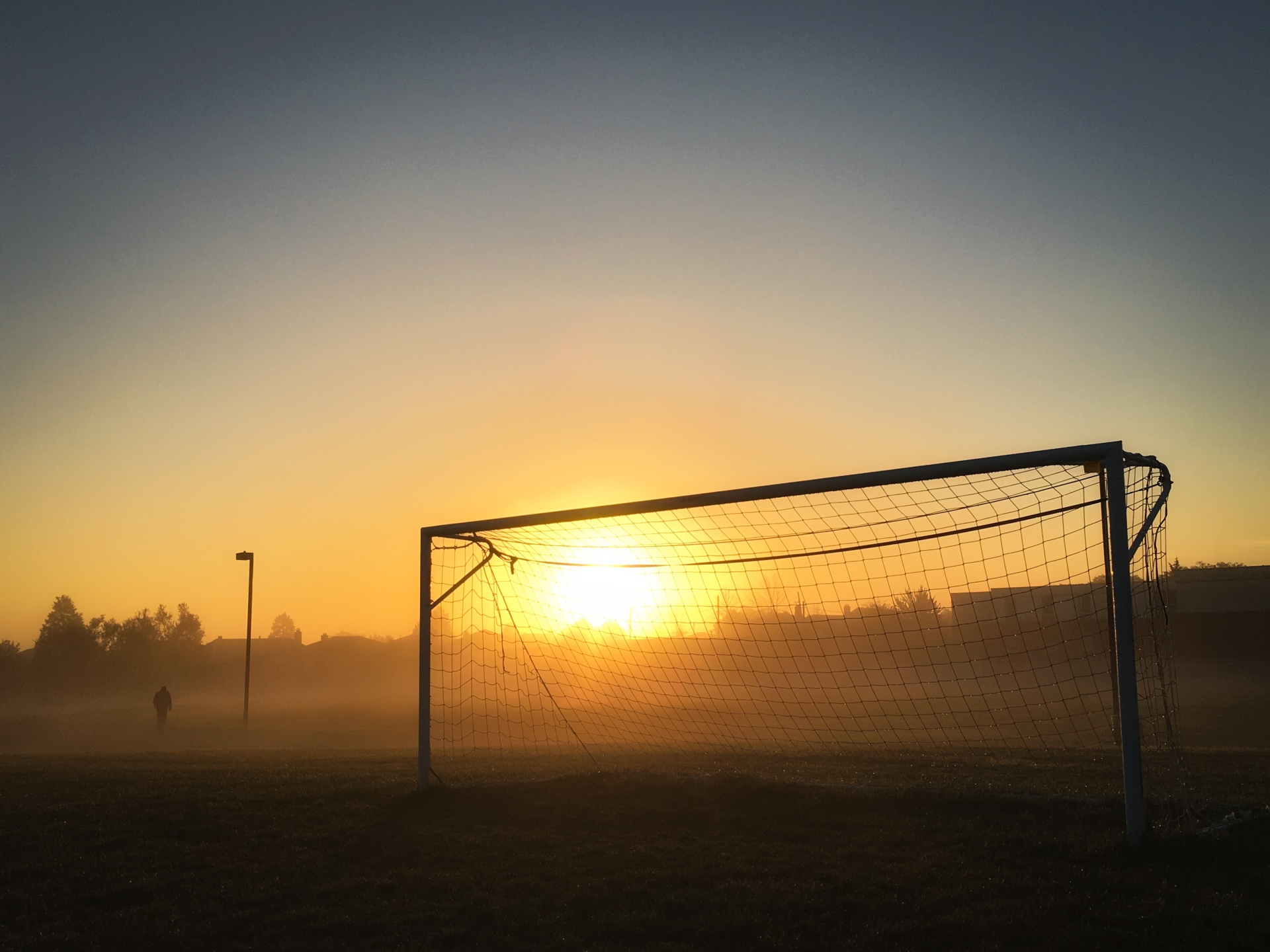 For the record the Rangers scorers were Brendan Burke, Shane Murphy, Bob Murphy and Jason Dermody, sealing a result which leaves the Kilmanagh men level on points with Brookville in third place, however the Ballyragget side have a game in hand.

The status quo continued in Division Two as the top two kept up their winning ways on Sunday.

Leaders Castlewarren Celtic picked up three points when they were awarded a walkover against Callan United B. Celtic travelled to the Fair Green for the fixture, but came home with all three points as the hosts were unable to field a full team.

That result leaves them three points clear of Evergreen C, but the city side remain hot on Celtic’s heels after they beat St Ann’s 4-2 to move to stay three points behind with two games in hand on Castlewarren.

The city side have been in good form in 2017 - they beat St John’s 8-1 in their opening game of the year - and continued in the same vein with goals from Chris Aylward, Kevin Ireland, Cormac Hogan and Gerry Walsh.

Richie Tobin was on target for the Saints, helping himself to a brace to keep up his good scoring form this season.

Sunday’s win was their sixth of the season - they’ve only been beaten once this term, an opening day loss to Brookville.

It’s also ‘as you were’ in Division Three as the top two kept their winning ways. Leaders Ballacolla stayed in front thanks to a 3-1 away win over bottom side Thomastown United C.

Ormonde Villa kept up their fine run of form of late when they had a 3-0 win over Highview Athletic B. They’ve had five wins and a draw since their only loss of the season, which was to Ballacolla, back in October.

The good results weren’t just limited to games in Kilkenny & District League - Conor English was the man of the moment as Evergreen booked their place in the last 16 of the FAI Junior Cup.

The city side had a long road trip to Louth for their clash with Newfoundwell on Sunday and quickly found themselves facing an uphill task when Brian Kermode shot the home side ahead inside eight minutes.

However, Evergreen were no slouches in the attacking department themselves. They bounced back in perfect style, English netting the equaliser within five minutes after some excellent work from Ben Hickey.

The goal was just what Evergreen needed to kickstart their game into action. English doubled his tally and gave Evergreen the lead when he bagged his second of the game with 25 minutes on the clock.

Mikey Drennan, who provided the assist, turned scorer soon after when he blasted home Evergreen’s third goal to make it 3-1 before the half hour mark.

Newfoundwell were stunned by that salvo from the Kilkenny Premier Division champions. Although they halved the deficit through John Kermode’s 61st minute goal they couldn’t get back on level terms.

The action switches to the Maher Shield this Sunday, when Evergreen A begin the defence of their title at home to Castlewarren Celtic.