Evergreen B 1, Freebooters A 6 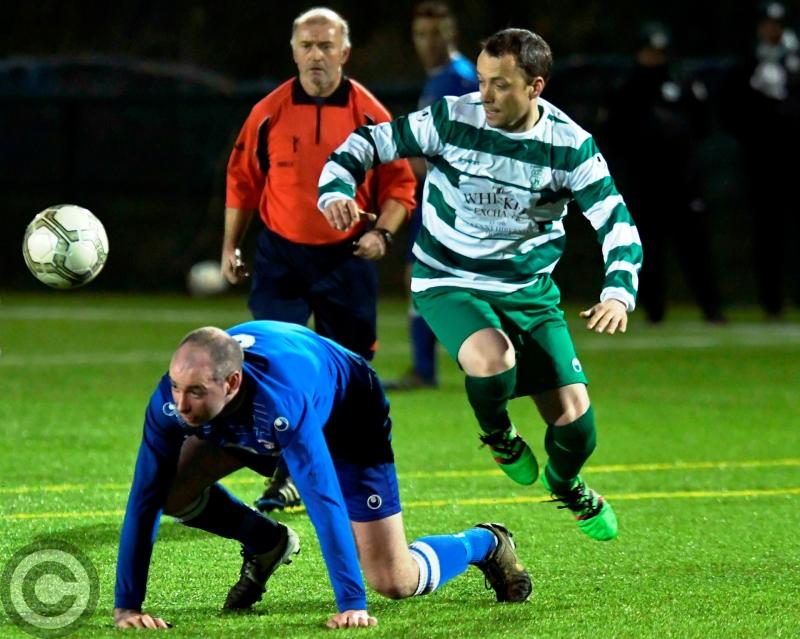 Mark Owens (Evergreen B) jumps into action as he leads Niall McEvoy (Freebooters A) in a race for possession. Photo: Michael Brophy

There’s still some way to go in the title race but Freebooters A have made sure things are very much in their own hands.

The Blues were razor-sharp on Saturday night, firing in six goals that bagged three Premier Division points and turned the lights out on Evergreen B.

However, the performance was about more than the win. It sounded out a warning that this young side has a bit of steel behind it.

Not for the first time this season Booters made the trip out to the Kells Road and left it feeling like a second home. The result was better than the one they recorded against League champions Evergreen A earlier in the campaign; in the two away games they’ve now hit the ’Green for 10 goals, a stat that would’ve been unheard of in recent years.

However, it was how they reacted after suffering a setback that impressed the most. Two up inside the first half, Freebooters seemed in danger of being overrun when Evergreen hit back with a cracker early in the second half. David Roche was the catalyst for the change in the hosts, unleashing a sweet long range strike that looped over Blues ’keeper Darren Rowe and crashed into the net.

With the deficit halved Evergreen, playing their first game since October 16 (a gap of 12 weeks between matches), suddenly seemed full of fire. But Freebooters worked quickly to extinguish the flame before it spread.

The response, not to mention the finish, was swift and to the point. Within two minutes of leaking the goal Freebooters hunted down another. Ger Hayes did the legwork, dashing past several challenges along the right flank before pulling a low ball across goal for Emmet Nugent to steer home.

The goal was a simple finish but carried a more emphatic message: ’Booters were hungry for goals.

They went some way towards satisfying that appetite when they rattled in goal number four just three minutes later.

Again, the strike stemmed from Freebooters’ desire to attack at will. Nugent went on the run, going down after a clattering challenge in the box, but shouts for a penalty were cut short as Henry O’Neill stepped in to snap up the rebound and curl it into the bottom right corner. 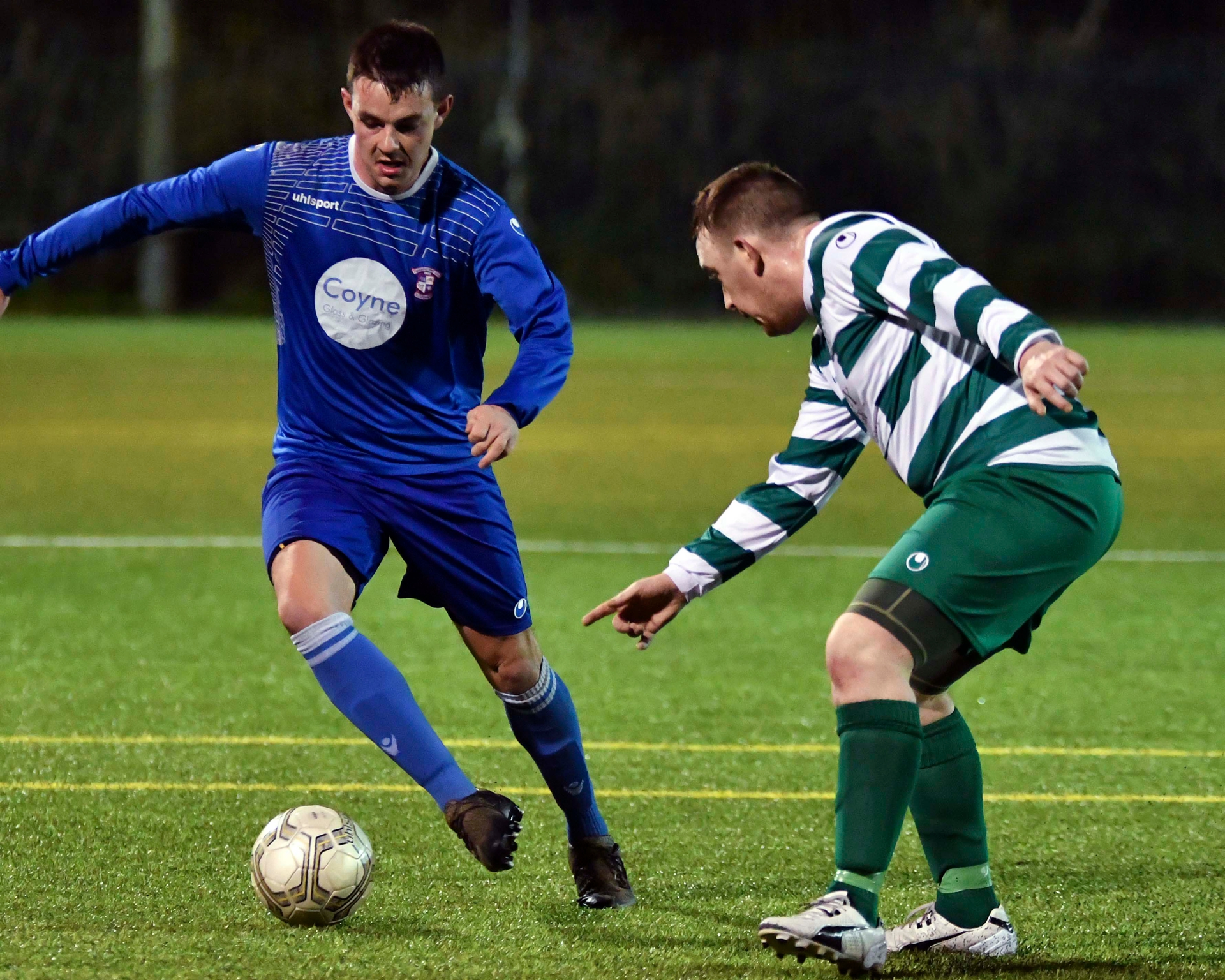 The Blues had been just as swift in the first half as they looked to quickly take control of the game. They bossed the opening 15 minutes, going close with efforts from Paddy Cahill, Kieran Moloney and Henry O’Neill, but Evergreen’s defence held firm.

The pressure was mounting, however, and told when the hosts finally cracked after 17 minutes.

’Booters, who felt they had strong claims for a penalty when David Rice felt he was nudged under a cross, saw their claims turn into cheers when Rice got his head to Henry O’Neill’s corner and powered a header into the net.

The goal gave Freebooters the ammunition they needed to charge forward in search of more. The all-weather pitch was the perfect foil for their fast-paced style of play, so it was no surprise to see the conditions lend themselves to a second goal.

Going the direct route paid off for Freebooters’ second, as Darren Rowe’s booming 28th minute kick-out was flicked on by Paddy Cahill.

Emmet Nugent read the delivery and was on it in a flash, sprinting through a gap in the defence to curl a sweet strike inside netminder Ciaran Farnan’s right hand post from the edge of the box.

The 2-0 lead could easily have been three within minutes. Cillian O Conghaile broke from midfield and delivered a teasing cross for Henry O’Neill to get on the end of, but he glanced his 30th minute header just wide of the target.

It had been a frustrating first half for Evergreen, proof of which came from their shot count. Cian Morton had to wait until the 44th minute for his side’s first real chance of merit, when he gathered Luke Hickey’s pass on the edge of the box and spun his man, but the strike went straight into Darren Rowe’s arms.

The hosts livened things up in the second half - but only after Mark Connick took another Nugent shot off the line - and began to enjoy good spells of possession. Despite the two-goal deficit they worked the ball around in a patient manner, waiting for a chance to present itself.

They did have the ball in the net on 52 minutes, but Sammy Johnston’s strike was ruled out for offside.

The despair was quickly wiped out, and how! David Roche breathed life into the game when he outmuscled Niall McEvoy to win Noah Canty’s 59th minute header close to the right sideline, then spun and lashed home a looping drive from long range.

The goal was a cracker, and lifted Evergreen’s spirits, but the revival was swiftly stopped in its tracks as Nugent and O’Neill struck twice in three minutes to give the game a Blue hue once more.

Not that Freebooters were content to keep things at 4-1. O’Neill also nabbed another goal soon after when he rushed in to snap up a loose ball but his 65th minute shot crashed into the side netting.

Sub Andrew Wall lent his searing pace to the next Freebooters attack a few minutes later. Breaking from his own half he tore at Evergreen, scorching through on a diagonal run until he found room to release Sam Watkins, but his shot was saved by Farnan.

The danger wasn’t over, as Paddy Cahill seized on the rebound, but Farnan did well to turn his effort out for a corner.

A clearly hurt Evergreen were stung by the Freebooters flurry and bit back accordingly. They had a goal chalked off for offside but didn’t let up, going close with chances through Cian Morton and Richie Brennan, but both were off-target.

The final say went to Freebooters though, with a lightning-quick double wrapping up the spoils.

Even with 82 minutes on the clock the visitors were full of running, as O Conghaile and Nugent proved when they linked up with James Kelly to launch another attack. Nugent’s shot was saved, but sub Craig Hayes was on hand to sweep the rebound home.

Nugent was denied that time, but made up for it when he completed his hat-trick five minutes from time. Some quick thinking saw O Conghaile prise Evergreen apart from a quick free, releasing Nugent through the centre.

He sprinted away, pausing only to tuck the ball past the outrushing keeper and round off a comprehensive and confident win for the Blues.