Hickey the hero as Maher Shield champions Evergreen march on 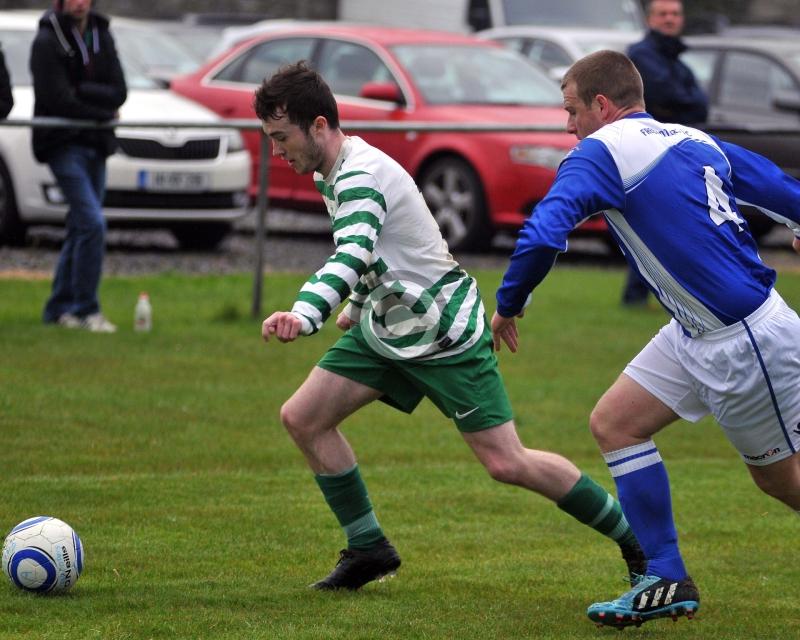 Ben Hickey was the man of the Maher Shield at the weekend as he helped champions Evergreen roar into the quarter-finals.

Hickey helped himself to a hat-trick as Packie Holden’s side booked their place in the last eight of the Shield.

Division Two side Castlewarren Celtic travelled to the Kells Road for their Saturday night clash under lights, which was rearranged from a Sunday morning kick-off.

With strikers Daragh Walshe (college) and Simon Burke (Australia) now departed the club has had to look through the team for the goals to keep their season on full charge. Hickey duly did his bit, firing in a second half hat-trick as Evergreen cruised to a 7-0 win.

The hosts were quick to get up and running, taking a 2-0 lead in at half-time thanks to Dylan Whearty and Peter Henebry, but really opened up after the break.

Mikey Drennan made it 3-0 five minutes after the restart before Hickey took over, hitting the net three times in 10 minutes before Oisin Corr capped a good night with a penalty three minutes from time to seal an emphatic win.

Should Evergreen retain the Shield they will ensure their club has finished as winners for five straight years.

The Shield has resided at the Kells Road since 2012, when Evergreen A beat Freebooters A 2-0 in the final with goals from Declan McQuillan (now back at the club after his college time in the US) and Joey Mulcahy.

In 2013 it was the turn of the club’s B team to take the spoils as they beat Freebooters A 3-2 on penalties. The game finished 1-1, Ger Galvin’s stoppage time goal cancelling out Damien Raggett’s penalty, before Adrian Kealy secured the title with the last penalty in a dramatic shootout.

In 2014 the A team beat Newpark 3-0 thanks to goals from Brian Jordan, Jamie Owens and Vinny O’Brien. They retained the title last year, Jason Quan’s extra-time winner proving enough to beat Thomastown United A 2-1 after Sean Barcoe replied to David Kavanagh’s early goal for United. 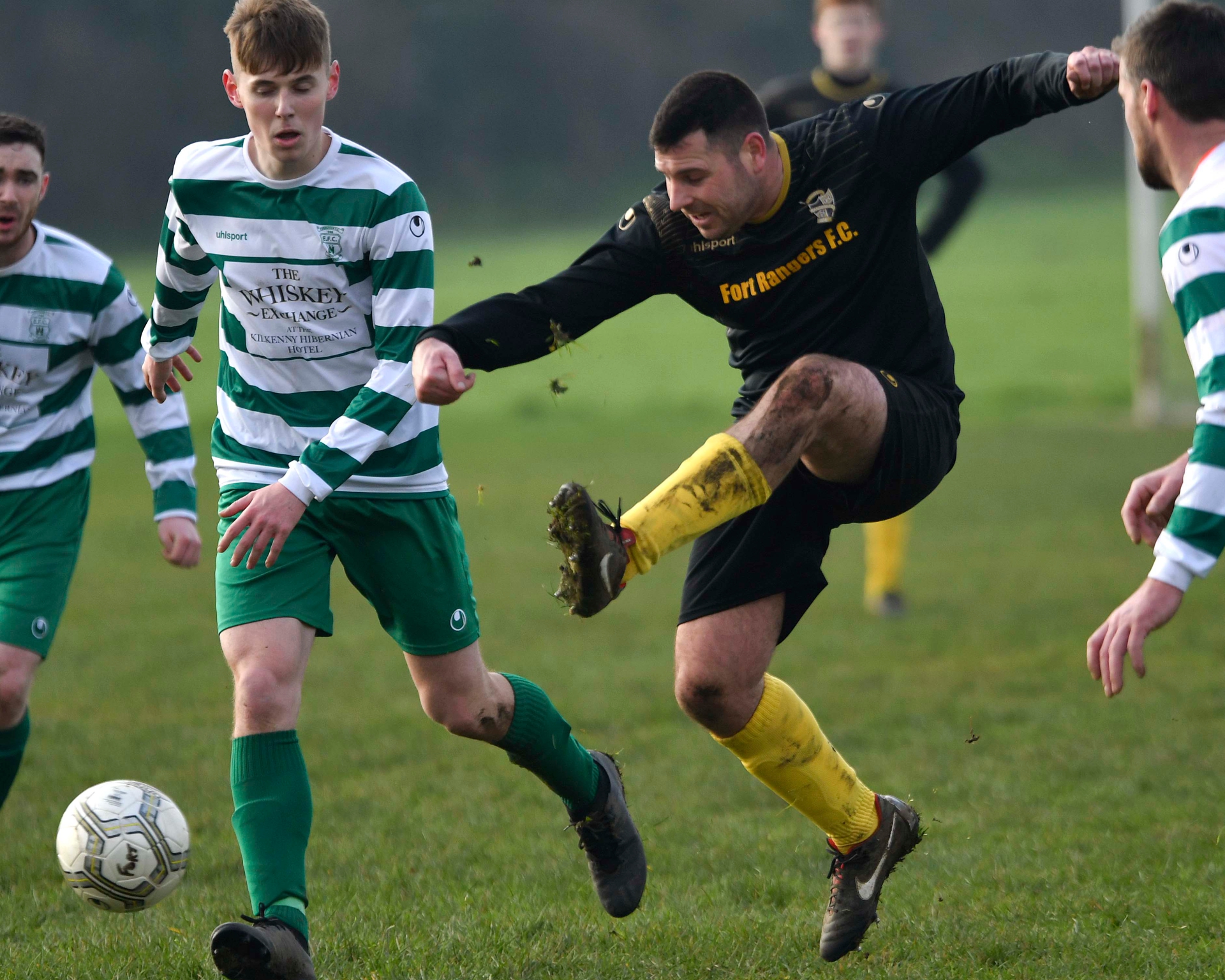 Kenny Morris (Fort Rangers) gets his shot away as Niall Brennan (Evergreen B) closes in. Photo: Michael Brophy

Evergreen B saw their hopes of bagging a second Shield title in three seasons come to an end after they came unstuck against Fort Rangers in Wallslough.

The home side were on fire from early on, going 2-0 up inside five minutes before ending their day with a 5-2 win. Eddie Nugent led the way with a hat-trick while Paddy Hogan got his name on the scoresheet for the second week in succession. Kenny Morris was also on target for Fort, with Ciaran Snype’s brace proving scant consolation for Gary Owens’s Evergreen side.

Deen Celtic made sure their name was in the hat for the quarter-final draw, but had to survive a late fightback from Clover United before victory was assured.

Celtic started like a train, working the ball around well before John Doheny fired home a 14th minute opener. They doubled their lead 10 minutes later, Stephen Daly finishing after he was picked out by Doheny’s ball over the top. They made it 3-0 when Daly teed up Richie Lynch to cap a fine first half for Celtic.

Clover rang the changes in the second half, hitting back with two goals to reduce the deficit, but the visitors held out for the win.

Elsewhere Thomastown United won their all-Premier Division clash with Callan United, but didn’t have it all their own way. A week after beating Callan 4-2 in the league the sides met in another goal-filled clash.

Callan took an early lead, but were pegged back when Andy Kavanagh (2) and Sean Brennan struck three times in 13 minutes to make it 3-1 to the hosts by half-time. Callan fought hard to get back into the game, narrowing the gap five minutes from time, but Sean Brennan’s second of the day settled Thomastown’s nerves in the dying seconds of normal time, despite Callan bagging a third in injury-time.

Fellow top flight side Stoneyford United booked their place in the last eight after an entertaining tussle with Brookville. Conor Coffey (2) and John O’Shea did the damage for Stoney but Alan Ruth’s brace saw the Ballyragget side push them all the way.

Fellow top flight side Freebooters B also advanced to the quarter-finals, where they will join club-mates Freebooters A (the only side who were given a bye to the last eight) when they beat St John’s in an all-city clash in Garringreen. Ryan Maguire led the way with a brace for the Blues, who wrapped up the 3-1 win with a Jackie Mulcahy strike.

Highview Athletic were comfortable winners at the weekend as they saw off fellow Division One side Newpark 5-0.

William Flood (2), Sheamie Kavanagh, Shane Ralph and Dean Broaders grabbed the goals that maintained their unbeaten domsetic run - they’ve posted six wins and a draw in the league to go with their two wins in the Shield.

League games were thin on the ground at the weekend but Bridge United were left celebrating after they grabbed their second win of the season away to the Lions on Sunday morning.

Bill Lawlor, Shane Murphy and Eoin Kavanagh netted the goals that brought the Lions’ winning start to 2017 to an end. The home side, who had been aiming for three wins in a row, had Lee Campion on the scoresheet.

The only game in Division Three saw Ormonde Villa record the highest score of the weekend when they beat Thomastown United C 8-2. The Nolan brothers did most of the damage for the city side with Frank (3) and Aidan getting four of Villa’s eight goals.

A brace apiece for Michael Kenny and Tom Fitzgerald secured all three points for Villa, who are now just a point behind leaders Ballacolla (26pts to 25) from their 10 games played.

Sunday’s win was their fourth in a row and extended their unbeaten run to seven games - Ballacolla are the only team to have taken something from Villa so far this season. They beat the city side 4-3 in Garringreen in October (Villa’s only loss so far in the league) then drew 1-1 in the reverse fixture back in November.

Rovers on the way

The biggest result of the week came off the pitch. League of Ireland side Shamrock Rovers have accepted an invitation from Thomastown United to play their Leinster Senior Cup game in Kilkenny. The match will be held in United Park on Saturday, February 18. Kick-off is at 2pm.