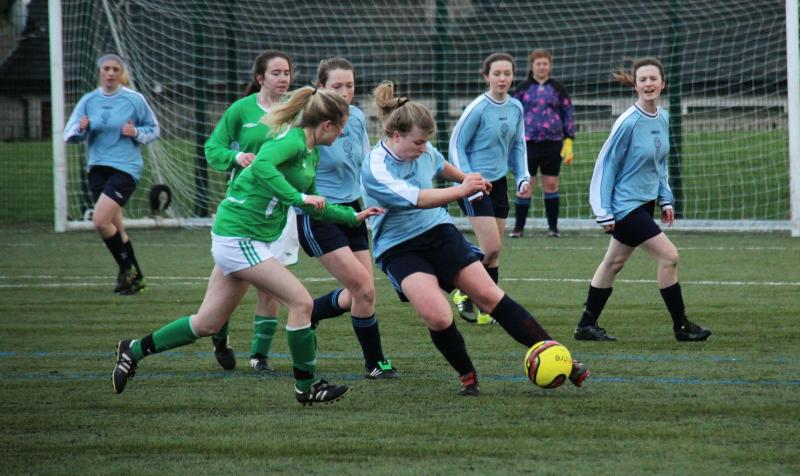 Lauren Valentine was the toast of the Presentation Secondary School after her extra-time goal proved enough to win the FAI Schools Leinster Senior Cup.

The young striker picked the perfect time to ghost in and slam home the 93rd minute strike that sunk the hopes of Portlaoise side Scoil Chriost Rí at a blustery Castlecomer.

The Kilkenny girls started with real intent, but were forced on the back-foot as the Laois girls used the strong wind to go on the attack. Gillian Keenan tested the resolve of Pres goalkeeper Cliodhna Kenny with an inswinging 14th minute corner. She went even closer eight minutes later, rattling the crossbar from another dead ball.

With Emma Lawlor and Jenny O’Neill proving a constant threat the Pres were under the cosh for long spells in the first half. They were grateful to netminder Kenny for keeping them in the game soon after. Emma Lawlor almost opened the scoring with a clever shot from outside the box, but Kenny managed to get a hand to the ball, forcing it on to the bar before gathering the rebound.

With Aobha O’Gorman, Hannah Scott and Lauren Valentine leading the Pres charge the Kilkenny side took over in the second half, but couldn’t find a way to break the deadlock. Scott saw her instinctive 54th minute shot whistle wide while Ciara Delaney clattered the bar with a stinging 62nd minute free-kick.

Scoil Chriost Rí came back into the game in the closing stages of normal time, but they couldn’t get the goal they craved. Coleen Rickard had the best of their late chances, including a shot from close range late on, but she couldn’t keep her effort on target.

Those missed chances came back to haunt the Portlaoise girls, who fell behind when Valentine pounced to turn Scott’s cross home from the corner of the six-yard box and seal victory for her side.