Clever Kelly gets Kilkenny back to winning ways 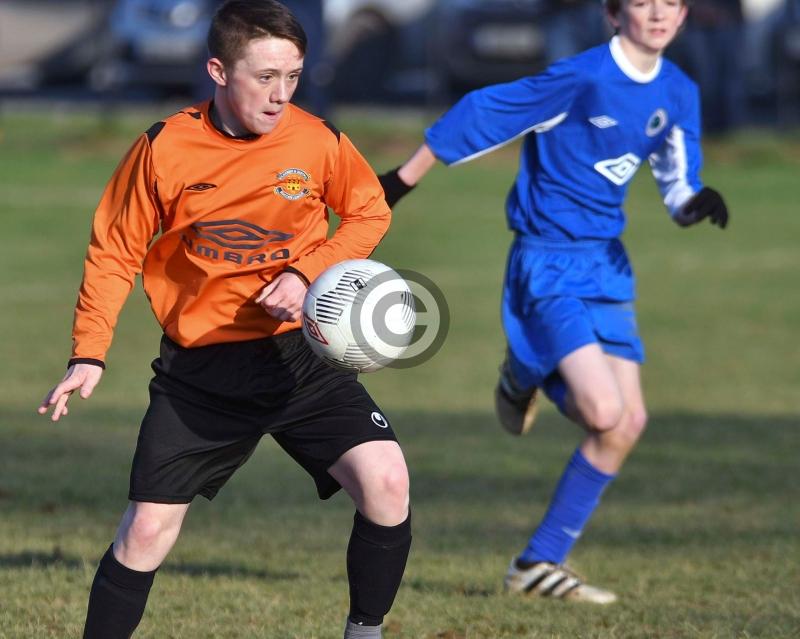 Kilkenny's Cian Dunne keeps his eye on the ball during the under-13 side's game against the NEC. Photo: Michael Brophy

What’s the best way to bounce back from defeat? Earn a win with an impressive performance!

The Kilkenny & District League’s under-13s did just that as they earned their first win in the Leinster inter-league with a top class show against the NEC.

Right from the off the hosts were on top in Derdimus on Sunday, brightening up a chilly afternoon with a display that left their supporters purring with delight.

The Cats stamped their authority on the game within a matter of minutes.

Killian Kelly put them on the front foot when he controlled a long ball and slipped Cian Dunne through on goal, but his fifth minute shot flashed wide of the target.

The chance was the perfect pick-me-up for Kilkenny, who lost their opening game of the group away to Carlow.

Quick as lightning Kelly seized possession, then waited for Dunne to make his move before teeing his team-mate up. Dunne did the rest, taking one step inside the box before drilling a low shot inside O’Driscoll’s left hand post.

Kelly was a driving force for Kilkenny in that first half – matched only by Kyle Jordan, who was a tiger at left full-back! – so it was no surprise to see him play a part in the Cats’ second goal just a few minutes later.

He showed his skills from the dead ball, firing in a menacing corner which arrowed into the centre of the box. Evan Rudkins came up from the back to make his presence felt for the set-piece and it paid off, as he brushed off a challenge to force the ball home from close range.

Kilkenny were full value for the two-goal lead but weren’t content to rest on their laurels. Pushing forward they showed they wanted to increase their lead. They nearly did just that when Cian Dunne chased down a wayward NEC back-pass and hared towards the box, but a timely tackle forced the ball out for a corner.

The NEC rang the changes for the second half, bringing on six subs at the break. It took them some time to find their feet after the restart, but Kilkenny were keen to pick up where they had left off.

The livewire Kelly was just as busy in the second half, testing sub goalkeeper Thomas Dowdall with a stinging free from out on the right. The netminder was called into action again soon after, springing from his line to superbly keep out Dylan Hunston’s reaction shot after the ball broke his way.

Dowdall was busy again a short time later, using his feet to make a fine block and keep out Kelly’s sharp 39th minute shot, but he had no such luck when the Cats stretched their lead to three after 41 minutes.

Dylan Hunston got them moving with a clever ball from midfield. Cian Dunne raced on to it, then split the NEC defence with a low ball for Kieran Kelly. His powerful shot was well saved by Dowdall, but there was little he could do to prevent Dunne from hammering home the rebound.

Even after going 3-0 up, a hungry Kilkenny wanted more. Sent on his way by Ray Lawson’s 44th minute pass Kelly did well to skilfully lose his man and ping a low ball across the box for the incoming Cian Dunne to meet, but netminder Dowdall managed to claw the ball into his grasp before it crossed the line. The ’keeper was in action again a few minutes later, when Kelly again seized on a stray kick-out and bore down on goal, but Dowdall stayed big to make a vital block.

The Cats will be hoping to continue their winning ways when they entertain the Midlands League in round three. The game is scheduled to be played in February, with further rounds against the DDSL and Kildare in March and April respectively completing up their campaign.