Highview Athletic A 3 Deen Celtic A 2 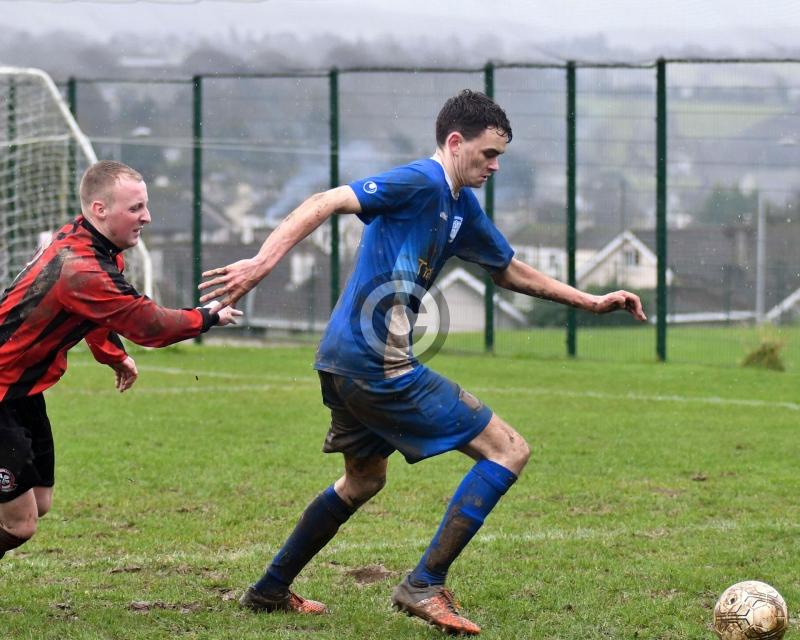 Stephen Browne (Highview Athletic A) fends off Mikey McDonald (Deen Celtic A) during their Division One game in Harristown. Photo: Michael Brophy

The race for the Division One title took another dramatic twist as Sheamie Kavanagh blasted Highview Athletic to the top of the table.

Kavanagh was ice-cool under pressure, retaining his composure to slot home the 89th minute goal that saw Harristown explode with delight and push his side three points clear at the top of the table.

The goal was a top-class finish to what had been a barn-storming game as, despite the conditions, Highview and title rivals Deen Celtic A delivered a performance which would not look out of place in the top flight.

It was beginning to look like both would have to settle for a share of the spoils (a result which would have satisfied promotion rivals Clover United) when Kavanagh struck.

Dean Broaders did the damage, slicing the Celtic defence open with a perfectly-weighted through ball for Kavanagh to race on to.

Springing the offside trap, the striker did the rest. He took a touch to steady himself, then coolly tucked a sweet shot beyond netminder Robbie Lynch’s left hand and inside the near post.

Highview ended the game just as they had started it, attacking Celtic with real intent. They had a great chance to snatch the lead inside two minutes, when a spell of offensive pressure ended with Murty Broaders whipping a corner in for Kavanagh to clip towards goal, but Jason Carroll saved his side with a vital clearance at the back post.

Deen were determined that the game wasn’t going to be all one-way traffic and showed their attacking threat soon after.

Robbie Lynch’s fifth minute booming kick-out bounced through for twin brother Richie to latch on to, but ’keeper Shane Kavanagh got down to take the sting out of the effort before Steven Browne mopped up the loose ball.

That was an early warning from the visitors, who didn’t wait much longer to turn the game their way. The breakthrough stemmed from another Lynch kick-out, Jamie Holohan cushioning the 11th minute kick down for Richie Lynch, who worked it on to Stephen Daly.

He waited for the perfect moment, then carved Highview open with a delightful ball for Jason Carroll to race on to and smash home.

Highview were stung by that goal, but didn’t take long to respond. Dean Broaders used the wet pitch to test Robbie Lynch with a free-kick that skidded towards the netminder, who did well to turn the ball around the post.

The danger wasn’t over as, from the resulting corner, Gary McDonald got his head to Murty Broaders’ inswinger, but he couldn’t keep his effort from rising over the bar.

Athletic kept pressing, using the surface to test Lynch. Sheamie Kavanagh tried his luck, drilling a low 18th minute shot at the target. Lynch did well to parry the ball, then even better to get up and stop Shane Ralph’s follow-up effort.

The chances continued to mount for Highview, who went closer again in the 20th minute. Dean Broaders unleashed a venomous free-kick which flew over the Deen wall but clattered back off the far post.

Within seconds the woodwork was tested at the other end. Lynch’s kick-out was flicked on by Carroll to Stephen Daly, who delivered a great shot on the turn. Shane Kavanagh got his hands behind the ball, pushing it on to his right hand post.

The chances were mounting, but it was Highview who capitalised on the half hour. Sent on his way by Dean Broaders’ through ball William Flood tore down the left wing before cutting back inside.

He waited for space to open up, then let fly with a stinging shot. Lynch did well to stop the ball, but couldn’t prevent Sheamie Kavanagh from racing in to tuck away the rebound.

Celtic shook off the disappointment and settled back into the game. After a spell where both sides pressed and pulled for the upper hand, it was the Castlecomer men who grabbed it four minutes from half-time - and how!

Pressing up on a short Highview kick-out, Deen were awarded a free-kick on the left side of the box.

Johnny Dowling, a midfield livewire all morning, stood over the ball and unleashed a real belter, the ball screaming over the wall and inside the top right corner.

Given the frenetic nature of the first half it was no surprise to see proceedings start at a slower nature after the break - but not by much!

The game was moving at a nice pace until the hour mark, when Dean Broaders lit the blue-touch paper.

Seizing on a loose ball in midfield, Broaders cut inside from the right wing, skipped beyond the edge of the centre circle and, with a swish of his left boot, opened up with a rocket of a shot that dipped and swerved before flying in under the crossbar.

Athletic were ignited by that goal, but almost stalled within minutes when they conceded a penalty, Stephen Daly going down in the box under a challenge from Gary McDonald.

Richie Lynch had the chance to shoot his side back in front but he was denied by Shane Kavanagh, who guessed correctly and dived to his right to keep the spot-kick out.

Neither side was willing to yield an inch after that – Broaders went close with another long-range strike on 70 minutes, while Eoin Brennan had a chance with a good 77th minute header which Shane Kavanagh did well to parry.

It seemed that both sides would have to settle for a point apiece, but Sheamie Kavanagh played his ace card in the dying seconds of normal time to change all that.