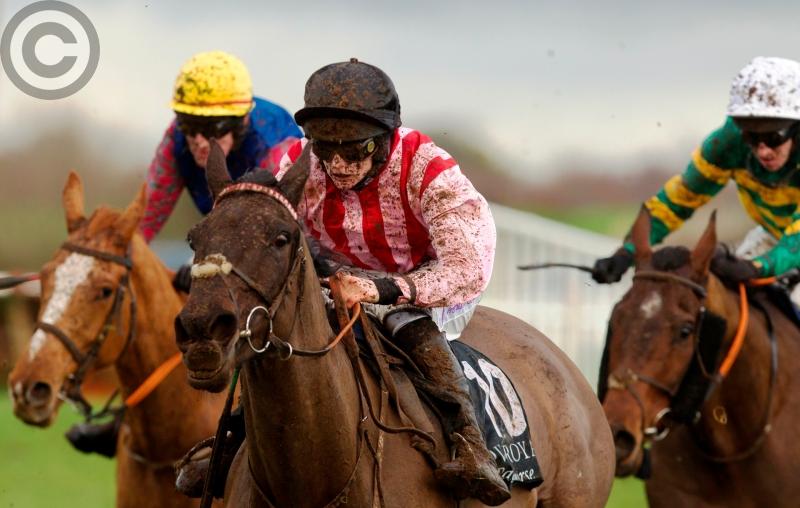 Douvan stretched his unbeaten run since joining Willie Mullins to 14 wins when taking the Grade 2 BoyleSports Tied Cottage Chase in great style at Punchestown on Sunday.

He went clear under Ruby Walsh from the penultimate fence to beat Realt Mor as he liked, easily justifying his odds of 1/14 favourite.

The Eider Chase at Newcastle could be the immediate target for the Ross O’Sullivan-trained Baie Des Iles who made most of the running to win the valuable 3m4f handicap chase.

The 8/1 winner was ridden by O’Sullivan’s wife Katie Walsh and could also take in the Irish Grand National at Fairyhouse if the ground came up soft.

Gordon Elliott got one over on Willie Mullins when the Jack Kennedy-ridden 7/1 chance Mick Jazz upset 4/9 favourite Cilaos Emery to take the listed novice hurdle, but the champion trainer hit back straight away when 11/2 shot Isleofhopendreams beat Elliott’s Sutton Manor to take the 3m handicap hurdle under Danny Mullins.

Elliott got a second winner when 9/4 chance Oakley Hall won the bumper under Jamie Codd, giving the Wexford amateur his third winner of the week.

The Enda Bolger-trained Auvergnat gave 22-year-old Donal McInerney his first winner as a professional and his first winner on the racecourse proper when landing the cross country chase at odds of 9/2.

It was a good day also for Velocity Boy, who made all the running under Barry Cash to take the beginners’ chase for Carlow trainer William Murphy.

Shattered Love, the 9/4 favourite, took advantage of the final flight fall of the Willie Mullins-trained Asthuria to win the Grade 3 mares’ novice hurdle under Jack Kennedy while Jamie Codd partnered 7/1 chance Fayonagh to win the listed bumper on her first start for the stable.

Texas Jack bounced back to form and might head for the Leinster National at Naas after his success at odds of 10/1 under Sean Flanagan in the rated chase while also over fences, the Donagh Meyler-ridden Paper Lantern took the 2m5f handicap chase for Skerries-based Karl Thornton.

A gamble was landed when Nicole’s Milan took the novice handicap hurdle for Sean Ahearn.

Available at 7/1 earlier in the day, the six-year-old was backed from 9/2 to 100/30 favourite on track and won in convincing fashion under Davy Russell for the Cork trainer.

Ado McGuinness landed the first treble of his career when dominating at Dundalk on Friday night.

Specific Gravity set the ball rolling for the Lusk trainer with a game success at odds of 4/1 under Ronan Whelan in the 10f handicap and the three-timer came up when he landed both divisions of the 6f handicap.

Like his first winner, Oor Jock is a nine-year-old and he landed the opening leg of the sprint under Declan McDonogh at odds of 3/1 while 5/1 chance Guanabara Bay and Colin Keane took the second division.

Keane had ridden an earlier winner when the Ger Lyons-trained Tuff Love, a 7/2 shot, took the 7f maiden.

The opening claiming race went to 5/2 chance Catchy Lass who is trained in Cavan by Anthony Mulholland and was ridden by Conor McGovern who hails from Clones.

Michael Halford and Conor Hoban struck with 5/1 chance Duchessofflorence in the 12f rated race while trainer Paul Flynn was on the mark with the Danny Sheehy-ridden 7/2 co-favourite Try Again in the 8f handicap.

A week after training his first winner, Richard O’Brien was back in the winners’ enclosure when 9/1 shot Patrick took the 6f handicap, a third career winner for Evan Daly.

Monalee gave the high-flying partnership of Henry de Bromhead and David Mullins yet another notable success when taking the Grade 3 Surehaul Mercedes-Benz Novice Hurdle at Clonmel on Thursday.

Sent off the 6/4 favourite, the promising six-year-old won easily from the Willie Mullins-trained Battleford and he now heads to Cheltenham in March where he will have a choice of races.

Clarcam had a busy January and he gained a deserved success when landing the 2m4f conditions’ chase at odds of 6/5 favourite for Gordon Elliott and Jack Kennedy.

On a good day for favourite backers, Good Thyne Tara was another successful market leader to deliver when overcoming some indifferent jumping to take the mares’ maiden hurdle at odds of 4/11, while 9/4 favourite Ask Nile took the 2m3f maiden hurdle for Seamus Neville and Brian Hayes.

Adrian Maguire teamed up with Paul Townend to win the 2m handicap hurdle with 12/1 chance Knockraha King while 3/1 chance Samanntom made all the running under Mark Enright to take the novice handicap chase for Tipperary trainer Aidan Fogarty and Mark Enright.

The concluding hunters’ chase went to 8/1 shot Island Master who was ridden for Liam Burke by Richie Harding.

Rachael Blackmore moved to within one winner of losing her 5lbs claim with a double with Shark Hanlon at Down Royal on Tuesday.

The pair got off the mark with 8/1 shot Honest Robber in the 3m handicap chase. At odds of 5/1, Camlann took the 2m3f handicap hurdle to complete the brace, the fourth of Blackmore’s professional career.

Denis Cullen and Mark Walsh combined to take the rated novice chase with 3/1 chance A Great View and at double those odds Indy Island won the 2m maiden hurdle for Stuart Crawford and J.J. Slevin.

Charlie Stout followed up on his gutsy success at Naas just three days previously when taking the rated novice hurdle for Clane trainer Shane Nolan and Eamon Corbett. The 9/4 joint-favourite led from the fourth hurdle and came home clear of the Elliott-trained Cadeau Du Bresil.

Gordon Elliott’s Don Poli, a three-time Grade One winner, is one of 37 horses trained in Ireland listed among 110 entries for the £1-million Randox Health Grand National at Aintree.

The eight-year-old features among an entry of 16 for Gigginstown House Stud, owner of last year’s winner Rule The World. Elliott and Gigginstown could also be represented by Empire Of Dirt while in the same ownership are Noel Meade’s Road To Riches and 2016 BoyleSports Irish Grand National hero Rogue Angel, one of three entries for Mouse Morris, trainer of Rule The World.

John Kiely has entered Carlingford Lough while Vics Canvas, third in the race last year at odds of 100/1, could carry the hopes of Dermot McLoughlin.

Henry de Bromhead has been in excellent form this season and has recent runaway Goffs Thyestes Chase scorer Champagne West among a three-strong team.

To facilitate the Goresbridge Breeze Up Sales in May, the racing fixture scheduled for Gowran Park on Wednesday, May 24 will now be held on Tuesday, May 23.