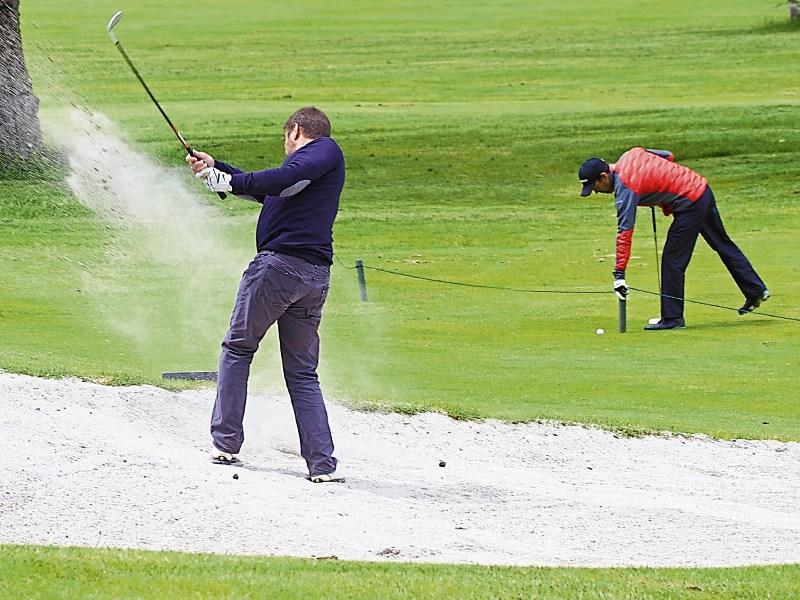 It is that time of year again when volunteers are called to arms to help keep the course in top condition at Callan GC.

A sheet will be up in the locker room for members who wish to volunteer a few hours during the year at special times, such as before Open week.

A vital part of club life, volunteering works both ways in that people get back as much as they put in.

COURSE - To keep the greens in top condition members are reminded to repair both their pitch and divot marks. The course committee also asks members who may have divot repair bags to return same to the bag station as soon as possible.

SINGLES - Frosty mornings meant there was a delayed start to the men’s singles competition at the weekend. Play did not begin until 11am on Saturday and 12 noon on Sunday, thereby reducing the number of players.

Of those who played some good scoring was achieved with Roland Komar winning on a score of 29pts, with John O’Dwyer second on 27pts.

Twos were recorded by Jeff Lynch on the fourth and Tommy Coyne on the eighth.

LADIES - With the inter-club season rapidly approaching all ladies interested in playing on club teams are invited to put their name on the appropriate team sheet in the ladies locker room.

The first practice round will be held on February 18 while club professional, Brian Doheny, will be doing some group lessons at a minimal charge in early March as well as hosting an information and rules evening for players and caddies.

LOTTO - There was no winner of the golf club lotto jackpot. Numbers drawn were 3, 6, 33. Lucky dip winners (€30) were David Holden, Andrew O’Halloran and Kyle and Kian Bergin. Sellers were Joe Madigan, Martin O’Halloran and Goretti Hennessy. The jackpot is now €1,950.

The due diligence of Winter golfers has paid off at Castlecomer GC.

The shock wave machine was rolled out again on the fairways to great effect recently. The severe frost of Saturday night resulted in Sunday’s course closure, but provided a further dividend as the top soil capillary water channels froze and expanded - a natural phenomenon guaranteed to lead to enhanced drainage results.

LADIES - The new lady vice-captain at the club is Ms Margaret O’Keeffe. Margaret has given sterling service to the club over many years in both a playing and administration capacity.

The ladies section had a hugely successful season of Winter golf, both in their 11-hole ladies league and in the 15-hole Winter League, which augurs well for the 2017 season.

The pivotal moment for the winning team came after Pat Morrissey mishit on the tee, then hooking into the drain on the 13th hole, more familiarly known as “Normans” before hitting his third from the drain into the hole for a marvellous birdie which, with a shot at the hole, earned four points for his team!

Forty hardy golfers teed off in this competition, which was played in near gale-force winds and showery conditions.

LOTTO - There was no winner of the lotto jackpot. With the prize ever-increasing, ticket sales have snowballed.

WINTER - Owing to Sunday’s severe frost, the final round of the Winter League was cancelled. Teams F, H, G and J qualified for the final, which is due to be completed on Sunday. The top seven scores from each team will count.

The weekly 15-hole competition, running as a second competition to the Winter League final, also concludes on Sunday.

DRIVE-IN - The captains’ drive-in is scheduled for Sunday, February 19.

The finishing touches are being put to the inter-club teams for the season ahead at Gowran Park GC. Members interested in the various competitions should put their names on the respective sheets in the clubhouse.

SUBSCRIPTION - All outstanding annual subscriptions fees are now overdue. Accounts must be brought up to date before the captains’ drive-in on February 26.

YEAR - The golfing diary for 2017 is now available from the Golf Office.

RED MILLS - Red Mills Race Day is on Saturday, February 18. There will be no golf that day.

DRIVE-IN - The Captains’ drive-in will be held on Sunday, February 26.

The final of the Mountain View GC Winter League was cancelled on Sunday due to the severe frost.

The final will now be held this Saturday. All participants will be notified of their tee time by text.

POT - Last week’s Split the Pot winner was Jim Rochford. Next draw is on Sunday. Single entry is €2. Full details available from the clubhouse.

Heavy overnight frost meant there was a delayed start to the 18-hole v par competition at New Ross GC on Sunday.

When it cleared, however, players enjoyed a fine day and some very good scores were recorded in a competition regarded as one of the toughest on the golfing calendar.

Taking the first prize with an excellent score of five up was Michael Butler, playing off a 12 handicap. The evergreen Noel Dunne (19) took second place with four up while Markie Murphy (15) was third with three up.

The gross prize was won by Derek Ronan, who finished on level par. Long striking Hugh Behan (5) took the Category One prize, finishing two up. Seamus Phelan (13) took Category Two also with a score of two up. Noel Kendrick (18) was the winner of Category Three with three up.

QUIZ - Golfers are reminded that the table quiz league starts on Friday, February 17. Intending entrants are urged to get their teams in as soon as possible, with the entry fee of €20. Full details next week.

PRIZES - All prize-winners are reminded that first presentation night of 2017 will be held at New Ross GC from 6pm this evening (Wednesday).

WINTER - The Winter League, which is now in its second round, must be completed by February 15. Players are reminded to enter their score in the book and to use a separate scorecard. The Bloody Marys lead the way after the first round.

The ongoing nine-hole is also available, providing players with plenty of options to improve their game.

RULES - The following ruling refers to the ropes around the course: if a ball comes to rest around the greens ropes may be lifted and ball played as it lies. Should the ball come to rest near the embedded wooden stakes drop the ball within two club lengths - not nearer the hole.

Placing is in play everywhere until further notice.

DRIVE-IN - The Captains’ Drive-In will be held on Saturday, March 4.

SENIORS - The seniors dodged the raindrops as they gathered for their weekly competition on Thursday. Players ventured out when there was a break from the incessant morning rain to get a round in, despite the heavy underfoot conditions.

The weather held up reasonably well over Tinneranny for a couple of hours, but then the heavens opened once again. As per agreement that the first team out have the right to call a halt to play, whether it be over nine or 14 holes, they wisely stopped play on the ninth.

People who started on holes other than the first had the first nine they played calculated for scoring purposes. Even the favoured champagne scramble format did not produce big scores mainly due to a fierce south-easterly wind, which was accompanied by squally outbursts of heavy rain.

John Shalloe (4) took nearest the pin on the 11th hole. No-one got near on the ninth.

All players are reminded to replace divots on the fairways, rake the bunkers and repair pitch marks on the greens even though they may not be your own. Doing these little things will help to maintain the course in the immaculate condition that it is in at the present time.

The Winter League continues this week at Borris GC.

The fourth round of the competition, play is open today (Wednesday), Saturday and Sunday.

LOTTO - There was no winner of the golf club lotto. Numbers drawn were 9, 14, 18 and 25. Lucky dip winners (€20) were Ruth Joyce, Tom Fitzpatrick and John Murphy. The jackpot is now €1,700. Tickets are €2 and are available from club members and the clubhouse bar.