Deen Celtic A 1, Clover United A 2 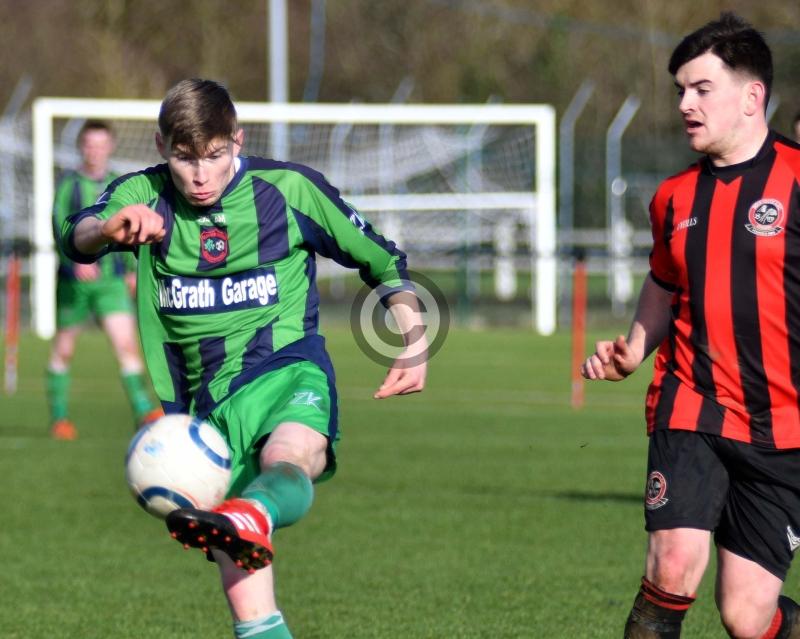 Josh Finane (Clover United A) clears his lines as Stephen Daly (Deen Celtic A) looks on during their Division One clash at The Prince. Photo: Michael Brophy

The race for the Division One crown roars on, but have Deen Celtic’s title ambitions stalled?

The Castlecomer club coughed up serious ground to their rivals as they spluttered to defeat against a well-drilled Clover United at The Prince on Sunday morning.

Whether Celtic were feeling the effects of last weekend’s late 3-2 loss to Highview Athletic A or not isn’t clear, but they struggled to regain the form that saw them challenge to become champions.

While Celtic were stuck in neutral for long spells on Sunday, enduring a frustrating morning, a confident Clover United sparkled.

The Rathdowney side worked well to contain their rivals, cementing second place in the table by striking when the moment arrived. That was just before the hour, when Vincent Cleere’s ball out of defence caught Deen off-guard.

Springing the offside trap (although Celtic argued he hadn’t!) Shane Bowe raced free from midfield and chased the ball down.

Keeping his composure, he watched as Deen goalkeeper Robbie Lynch raced from his line, then coolly rounded the advancing netminder before applying a neat finish.

The goal proved to be the first half of a double whammy for Deen as within minutes they also found themselves a man down, Johnny Dowling getting his marching orders for two yellow cards issued in a matter of seconds.

That brief 60-plus second spell highlighted just what kind of morning it had been for Celtic, who pushed and pushed but found little went their way.

They were given an early scare by Clover, who took just six minutes to have a pop at the target. Shane and Brian Bowe had bites at the ball when Ray Bowe’s corner flashed in front of goal, but somehow Celtic survived.

They settled into a solid pattern after that, Lee John Kinsella and netminder David Pointen marshalling a good defensive unit as they contained Celtic and limited the space into which they could move.

That didn’t mean that their attacking game was finished. Clover could and should have taken the lead in the 16th minute, when Ray Bowe’s low cross picked out Darragh Carroll in the dead centre of the six-yard box but he scuffed his shot when he seemed certain to score.

Deen Celtic came back at Clover after that, but couldn’t break the deadlock. Robbie Lynch’s booming 24th minute kick-out was allowed to bounce through for Stephen Daly, who drilled a teasing ball across the box, but it was just beyond the reach of Richie Lynch and Mark Delaney.

Clover shook off the pressure long enough to create some great opportunities to steal in front before half-time.

Mark Treacy had a chance when he stole in at the back to meet Josh Finanee’s excellent diagonal ball on the half hour but Lynch made a superb save, palming the ball over the bar.

They went close again in the dying seconds of the half, almost catching Celtic with a counter-attack. Darragh Carroll did well to snap up possession from a Deen free and used it to send Brian Bowe on his way, but his shot was tipped over by Lynch.

The danger wasn’t over as, from the resulting corner, Clover went close again. Ray Bowe’s corner was cleared as far as Mark Treacy, who unleashed a stunning long range strike, but Lynch dived full-stretch to his left to push the ball to safety.

The home side showed more attacking intent from the start of the second half. They enjoyed more possession, using it to pile on the pressure, but were sunk when Dowling’s red card followed Bowe’s goal.

Celtic continued to try and find a way back into the game, but found their task to be an uphill one when Clover struck for a second goal 12 minutes from time.

Darragh Carroll was the creator, releasing a great ball down the right for Shane Bowe to run on to. He sped towards the box, then stood up a great cross for the incoming Ray Bowe to head home at the back post.

Deen Celtic were down, but they were determined not to go out without a fight. Sub Jamie Holohan created a chance for John Doheny with a clever 88th minute corner, but Padraig Fortune cut the cheers short when he cleared the ball off the line.

The late charge did pay off, as another Holohan corner was headed home by Eoin Brennan just a few seconds later, but that was as close as Deen Celtic would come to getting something from the game. They almost avoided defeat when, with the game deep in stoppage time, Doheny clipped a low shot goalward from the edge of the box, but much to Clover’s relief the ball zipped past the outside of the far post.