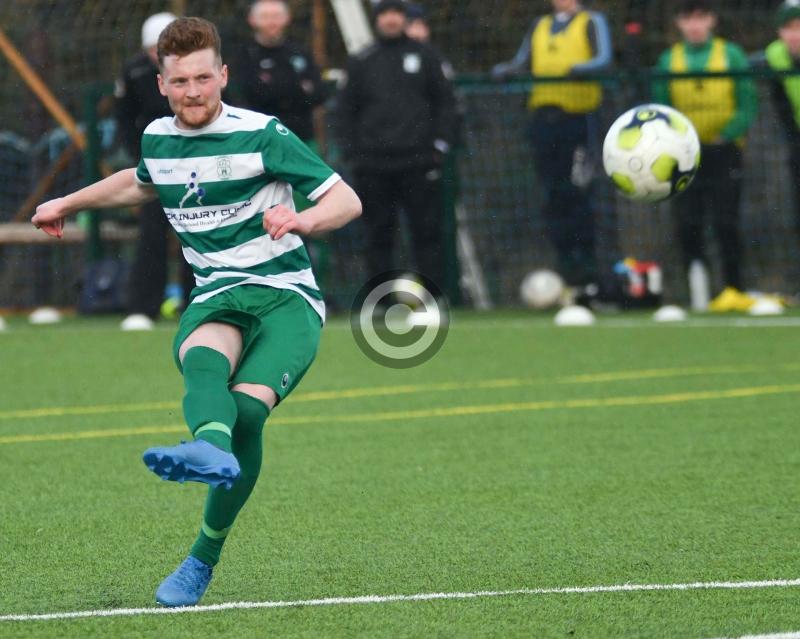 GOAL! Conor English curls in his second half free-kick to give Evergreen a 2-0 lead against Willow Park in the FAI Junior Cup. Photo: Michael Brophy

Evergreen won’t be looking too far ahead, but they could be forgiven for thinking that the road to the Aviva Stadium is calling them.

The TV cameras were out in force for their last 16 clash with Willow Park in the FAI Junior Cup, and while the game won’t go down as a Cup thriller there was still plenty for Packie Holden’s side to be pleased with.

For a start, the city side’s defence more than did enough to keep their Athlone rivals at bay. They frustrated Willow Park at times, first as a back three, before suffocating their attack when Evergreen switched to a back four.

It wasn’t just a solely-defensive display from the hosts. They might not have shown as much in attack as they have in the past but, when they did show their teeth, they hurt Willow Park.

Proof of that came deep in the second half, when Evergreen came through a spell of ’Park pressure unscathed and hit back to all but cement their place in the last eight.

The chance to surge into the quarter-finals presented itself when Evergreen pushed forward after a spell of pressure, Sean Barcoe holding up possession before being fouled on the edge of the D.

Conor English stood over the free and duly delivered. Peering at a spot inside the far post he curled the ball over the five-man wall and bent it beyond ’keeper Aidan Browne’s reach inside the top right corner.

The goal was something special for the home side, who sensed they had Willow Park on the ropes at that stage. Target-man Barcoe was involved again soon after, holding up Holden’s 73rd minute kick-out before releasing Mikey Drennan. A neat turn saw Drennan lose his man, but his stinging shot was finger-tipped over the bar by Browne.

They had a go again just a few minutes later. Evergreen’s pressure on the Park defence paid off when Browne’s kick-out was seized upon by the home side, who worked quickly to send the ball back from where it came. Play moved through the feet of Robbie Quan, Drennan and Barcoe, who sent sub Ben Hickey careering away down the right, but his angled shot crashed into the side netting.

The all-attacking display from Evergreen was a contrast to how they had started the game. It was a cagey start from both sides, who took time to suss each other out.

That said, when it came to chances, Evergreen were brightest in those early stages. They gave a glimpse of what they possessed when Dylan Whearty floated a free into the box after just six minutes, but Niall Andrews’ header flashed just wide. 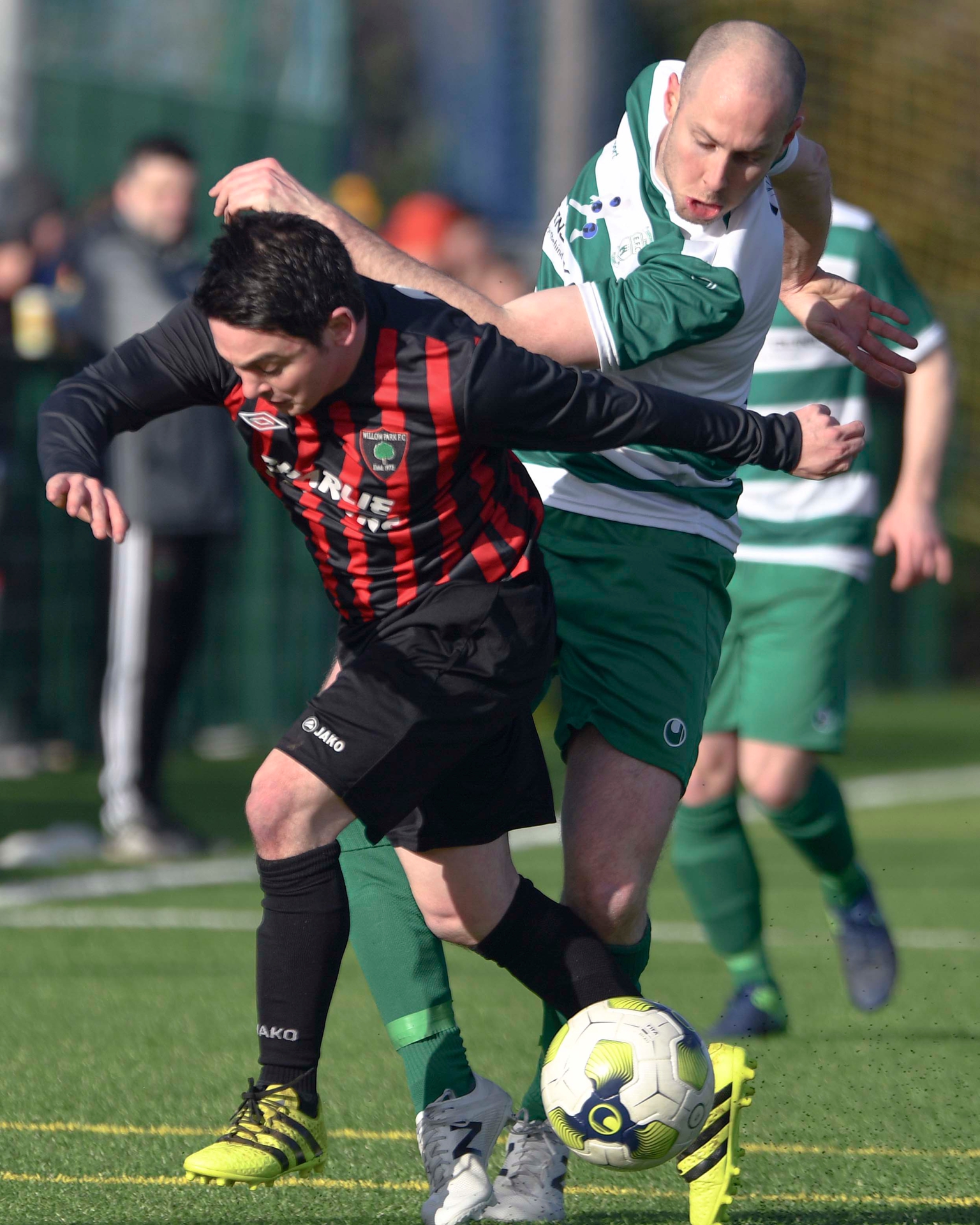 Willow Park came into the game after that fright, opening up the middle third and taking the fight to Evergreen. They retained possession well, Brian Caldwell stringing things together in midfield, but were caught cold when the hosts struck the opener after just 14 minutes.

Winning a throw-in on the left flank Evergreen took their time, waiting for Dylan Whearty to come up from defence to take it.

The move proved to be a smart one, as the brief delay saw Willow Park switch off. They failed to read the long throw, not to mention the run of Sean Barcoe, who ghosted into the box and then used his strength to hold off a challenge before glancing the ball inside the far post.

The goal was a huge setback for Willow Park, who found themselves on the backfoot as Evergreen found a new reserve of confidence. The city side had a great chance to double their lead five minutes later, when Chris Whearty’s corner fell to the unmarked Conor English in the middle of the box but he couldn’t get a full connection on the ball, which failed to hit the target.

Evergreen went even closer in the 22nd minute, when Browne came to the rescue for his side. Mikey Drennan deceived the Park defence when he went for goal with a menacing free-kick from the right. The ball beat the defence but not Browne, who moved smartly across his line to claw the ball out from its intended destination, the top right corner of the net.

Shaken into action, Willow Park got their rhythm back but, for all their efforts, they couldn’t find a path to goal.

That’s not to say they didn’t have chances. Brian Caldwell’s clever 25th minute flick-on was turned into a brilliant cross by Benny Magennis. Aaron O’Neill raced in from the left and had time but rushed his shot, blasting it over the bar.

It was Caldwell’s turn to have a pop at the target after the half hour, when a looping Magennis pass fell at his feet. He did well to hold off his man but Evergreen managed to deflect the ball out for a corner.

The Willow Park pressure continued into the second half and should have yielded a goal within minutes of the restart. Caldwell was quick to link up with sub Jamie Fahy, playing a one-two that saw Caldwell odds-on to score but Oisin Corr got back to nick the ball off the striker’s toe.

The danger wasn’t over as, from the resulting corner, Jack Quinn and Mark Nicholson stabbed at the delivery. The Evergreen defence was shaky, but they survived.

They had another scare soon after, when more Willow Park pressure presented the visitors with another chance in front of goal. They should have been back on level terms when Damien Rushe and Brian Caldwell linked up to present the former with a superb close range shot but he dragged his effort wide, with Holden rooted to the spot.

The big change, as far as the hosts were concerned, came when they switched to four at the back. With Tommy Earls and Declan McQuillan at full-back they had a solid look to the team, as well as pace when they needed to press on.

With the alterations helping to relieve the pressure, Evergreen were a changed side as English’s goal proved. They had a chance to make it 3-0 eight minutes from time when Robbie Quan connected with Chris Whearty’s corner. Quan’s shot was good enough to beat Aidan Browne but not the post, the ball clattering off the upright before bouncing into the grateful netminder’s arms.