Red Mills set to deliver another red-letter day in Gowran 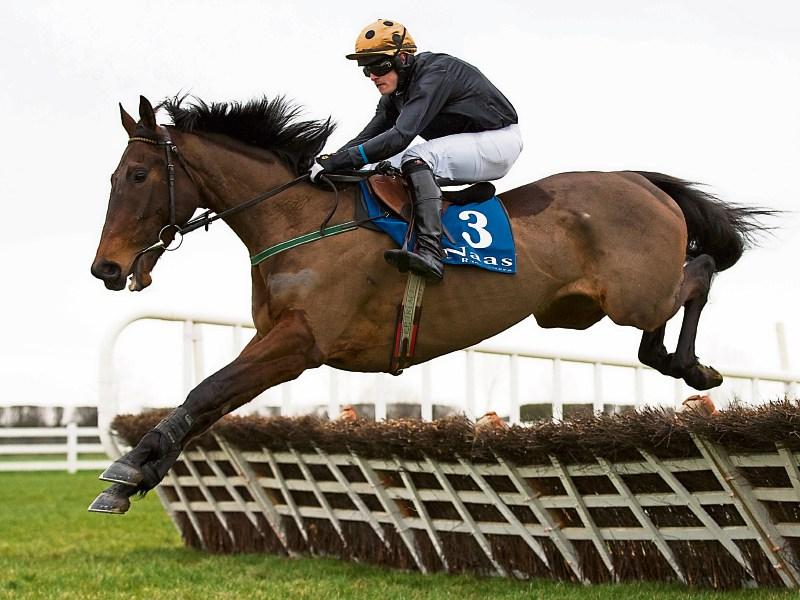 Yaha Fizz and Ryan Treacy on the way to victory in the 2 mile rated novice hurdle at Naas.

A high quality day of racing is in store when the Connolly’s Red Mills Race Day returns to Gowran Park on Saturday.

Now well established as a top Cheltenham Trials day, this fixture has seen such high class winners as Hardy Eustace, Solwit, Newmill, Dunguib and Un De Sceaux all winning over the past 10 renewals, all of whom have gone on to perform at the top festivals across Ireland and Britain.

This year’s renewal could see an appearance from 2014 Champion Hurdle winner Jezki who looks to put in one last piece of work before heading to Cheltenham.

The Red Mills Chase and Hurdle are complemented by five other high class races including The At The Races Careys Cottage Chase, The Sea Moon & Shantou at Burgage Stud Maiden Hurdle and The Ronan Lawlor Memorial Bumper.

“We have a really exciting programme planned for Red Mills Day this year” said Eddie Scally, general manager Gowran Park. “As well as top class racing we have a kid’s area and some excellent music during and after racing for the adults.”

“The Red Mills Day is a big part of the Irish road to Cheltenham and has produced some incredible winners over the years,” said Joe Connolly, CEO of Connolly’s Red Mills.

“Now in its 37th year we believe it is one of the longest standing Irish sports sponsorships and we are very proud of this association.

“Gowran Park is a valuable resource to the local area and it is great to see the crowds pour in and support Red Mills Day.”

Gates open at 11.30am on Saturday with the first race going to post at 1.20pm. Tickets, priced €15 for adults and €10 for students/OAPs are available at Gowran Park. Group discounts are available by contacting 056-7726225.

Sizing John, a first runner in the race for Jessica Harrington, landed a thrilling renewal of the Stan James Irish Gold Cup at Leopardstown on Sunday.

The well-supported 100/30 chance held off the late run of Empire Of Dirt to win by three quarters of a length. The result also gave rider Robbie Power his first success in the Grade One event.

Sizing John has a number of options at the Cheltenham Festival, including the Gold Cup itself.

Sean Flanagan landed the first Grade One success of his career when he partnered the Noel Meade-trained Disko to win the Flogas Novice Chase.

He is another with more than one option at Cheltenham but the Triumph Hurdle is the confirmed target for Mega Fortune, who was successful in the Grade One Spring Juvenile Hurdle for Gordon Elliott and Davy Russell at odds of 9/2.

Willie Mullins ran six in the Deloitte Novice Hurdle and landed the spoils with 12/1 shot Bacardys, who was giving champion amateur rider Patrick Mullins his first Grade One win over hurdles.

Foxrock is not eligible for the hunters’ chase at the Cheltenham Festival but he beat reigning champion On The Fringe to land the Leopardstown Inn Hunters Chase for Ted and Katie Walsh at odds of 2/5 favourite.

The Liam Cusack-trained Who’s That won the opening mares’ handicap hurdle for the third successive year when seeing off 5/2 favourite Toe The Line by a neck under Rachael Blackmore at odds of 9/2. Blackmore, the season’s leading conditional rider with 23 winners, had her claim reduced to 3lbs as a result.

Tom Mullins combined with his nephew Danny to win the 2m handicap hurdle with 14/1 shot Grand Partner while an easier winner to find was Someday who won the bumper for Jessica Harrington and her daughter Kate at odds of 3/1.

Joseph O’Brien was in the winners when he landed the featured Opera Hat Mares Chase at Naas on Saturday.

Jockey Mark Walsh brought the 9/4 chance from well off the pace to win the listed event from Solita.

The pair had earlier combined to take the opening maiden hurdle with 8/15 favourite Outspoken. Another successful market leader was 7/4 chance Yaha Fizz, who made it three wins in a row when easily taking the rated novice hurdle for Laytown trainer Eamonn Delaney and Ryan Treacy.

The Willie Mullins-trained Carter McKay jumped to the head of the betting for the Cheltenham bumper with an impressive success in the bumper for Willie Mullins and his son Patrick. The 8/13 favourite easily beat West Coast Time to add to his earlier win at Leopardstown.

Dermot McLoughlin and Conor Maxwell were responsible for the longest-priced winner of the day when 20/1 chance Westerners Son took the handicap chase.

It was a good weekend for Joseph O’Brien, who teamed up with his brother Donnacha to win the final two races, divisions of the 12f handicap, on the card at Dundalk on Friday night.

The O’Briens landed the opening leg with 6/1 chance Tommy Welsh and followed up half-an-hour later when War Goddess won at odds of 4/1 favourite.

It was a good night for favourite backers and the session began with success for 11/10 shot Sebastian Bach in the 6f maiden. The winner was ridden for Curragh trainer Michael O’Callaghan by Shane Kelly.

At the same price Fizzy Friday won the 7f race for Andy Oliver and Conor Hoban while Heartful landed the fillies’ maiden for Dermot Weld and Pat Smullen at odds of 11/4 joint-favourite.

Rashaan, much improved over hurdles last year, recorded his second win on the Flat when taking the 2m race for Bagenalstown trainer Colin Kidd and Niall McCullagh.

Admodum won the 8f handicap for Jim Bolger and Kevin Manning at odds of 13/2 while 9/2 shot Arbourfield took the 7f apprentice handicap for Prunella Dobbs and Robbie Downey.

Days after seeing two of their stars, Faugheen and Min, ruled out of the Cheltenham Festival next month, Livelovelaugh gave owner Rich Ricci and his wife Susannah a welcome change of luck when taking the featured Cashel Rated Hurdle at Thurles on Thursday.

Ruby Walsh brought the Willie Mullins-trained 5/2 favourite home a clear winner from stable companion Aussie Reigns. He may return to the same track next week for the Michael Purcell Memorial Novice Hurdle.

There was no such drama for 11/10 favourite Champagne Classic who readily won the 2m6f maiden hurdle for Gordon Elliott and Jack Kennedy while 2/7 favourite Don’t Touch It took the beginners’ chase for Jessica Harrington and Mark Walsh.

Dinnie’s Vinnie ran out the 14/1 winner of the handicap chase for the father and son team of Philip and Luke Dempsey. A bigger priced winner was 22/1 shot Perfect Man who won the 2m6f handicap hurdle for Borrisoleigh trainer Paddy Hurley and Damien Skeehan.

Amateur rider, Stephen O’Connor, partnered his first winner when 7/1 shot Planet Nine made a winning debut for trainer Timmy Hyde in the bumper.