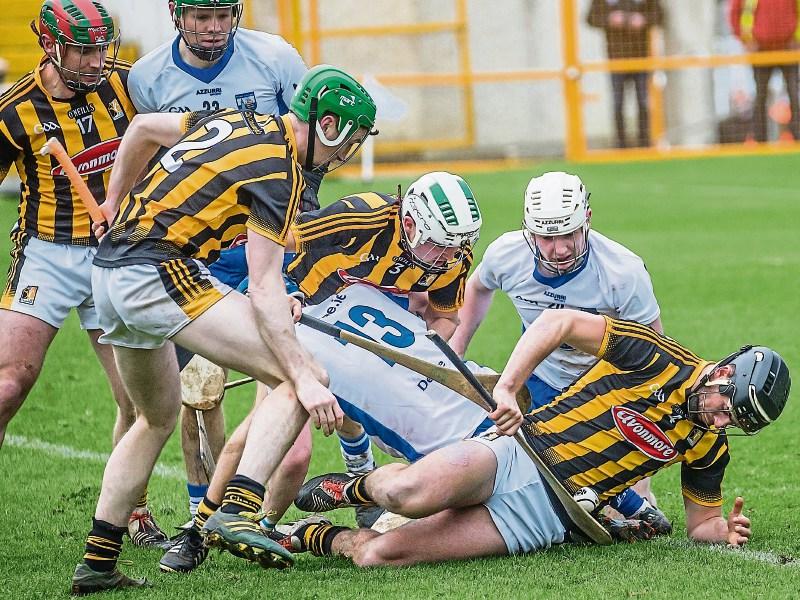 Conor O'Shea (K) tries to rise the ball under extreme pressure during the NHL game against Waterford. Photo: Pat Moore.

In a general sense Kilkenny didn’t play particularly well, but a really spirited and driving second half showing was nearly enough to save the day at bitterly cold Nowlan Park.

The Cats outscored Waterford by seven points to four during a dogged, hard hitting closing half, but they came up just short in this opening round tie in the Allianz National Hurling League on Sunday.

And now Kilkenny head away to play Clare on Sunday in a second round match, and as both were beaten in their first outing, the losers in Ennis will come under a bit of pressure in terms of relegation.

With a little luck at the finish, Kilkenny might have sneaked a draw, having chased the opposition from the eight minute when a Pauric Mahony point from a free pushed them behind (0-2 to 0-1).

Into the 73rd minute Richie Hogan had a half-chance shooting into the City end goal. However, under extreme pressure he pulled his effort for a point  wide of the posts from a central position.

Had the Cats pulled the match out of the fire it would have been some achievement.

They registered the closing three scores through T.J. Reid (free), Eoin Murphy (free) and defender, Kieran Joyce, as they fought tooth-and-nail to get at least a share of the spoils.

But it wasn’t to be, the only goal of the game by Patrick Curran - a great score in terms of creation and finish - in the 13th minute proving a crucial score in every sense of the word.

“I thought at the finish they were going to sneak a draw, but thankfully we held out,” was the summary from relieved Waterford manager, Derek McGrath, afterwards.

Kilkenny fielded with 10 of their All-Ireland final team, but against fast, busy and physically strong and imposing opponents whose touch was slightly better they really didn’t get a good rhythm going until the finishing straight.

Waterford, who played the orthodox 15-on-15 style during most of the opening half, but switched afterwards and retreated deep, were good at getting people in numbers around the ball to first win and then protect it.

Indeed, they won most of the close quarter tussles and breaking balls as the home side fumbled a lot of possession and miscalculated the simple lifting action of the ball on numerous occasions.

The will and spirit were good with the home side, but they were unable to win much ball in the air.

In the first half in particular the defence looked unsure and unsteady and was dragged around the place, much like in the All-Ireland final against Tipperary.

Yet Kilkenny got to half time without having shipped too much damage.

With the deficit at 0-10 to 1-11, and the advantage of the strong wind to come, they looked nicely placed.

The big push came afterwards, but Waterford, who took an extended break in the dressing-room during half-time and left their opponents standing on the pitch in the cold for a number of minutes, were ready for it and they met fire with fire.

Flying midfielder, Jamie Barron, was in top order for the winners, while Tadhg de Búrca, Pauric Mahony, Conor Gleeson, Barry Coughlan, Noel Connors and Michael Walsh also got through some serious hurling that hurt the opposition.

The big hits went in hard and fast from the off. After T.J. Reid (free) and Conor Gleeson traded early points, Waterford hit the front through Pauric Mahony with a free from 55 metres in the eight minute (0-2 to 0-1).

Mahony and Reid swapped points after that before Waterford goaled in the 13th minute.

The man with No. 23 on his back, Tom Devine, took full advantage when a home defender slipped on the 20 metre line on the right. The Modeligo man took a moment, steadied himself and drilled a hard, hurley driven pass into the hand of Patrick Curran in a central position.

The main scoring exchanges afterwards during this period were between Reid and Mahony. The former hit the break with six points in the bag. Mahony had eight, seven frees and one 65.

There were two near misses, both at the Kilkenny end.

In the fourth minute home goalie, Eoin Murphy, brought off a magnificent reflex save from a close quarter, first time strike by Shane Bennett. The save really was magnificent!

Then on 30 minutes Michael Walsh worked an opening for Mikey Kearney from about 15 metres on the right, but the latter’s whistling drive zipped across the face of goal and wide.

There were no narrow escapes at the other end.

Kilkenny introduced Walter Walsh from the start of the new half, but it was Waterford who made the early gains. Mahony (free) and Barron plundered points to up the divide to 1-13 to 0-10.

The Kilkenny comeback started with a lovely point from the Tullogher Rosbercon man on the 45 metres line bang on the right sideline. A foul on Jonjo Farrell earned Reid a like score, before Joyce placed Reid for one from play.

The Kilkenny push was on. The team was playing better  but they lost lively wing-forward, Pat Lyng at this juncture - he was good, very prominent - through injury.

Waterford, who were crowding the ball at every opportunity, recovered to snatch points through their two most productive players, Mahony (free) and Barron to leave the score 1-15 to 0-14 seven minutes from the end.

Kilkenny charged again, really hard, but a hat trick of points didn’t stop Waterford registering what was their third win at Nowlan Park in a decade.