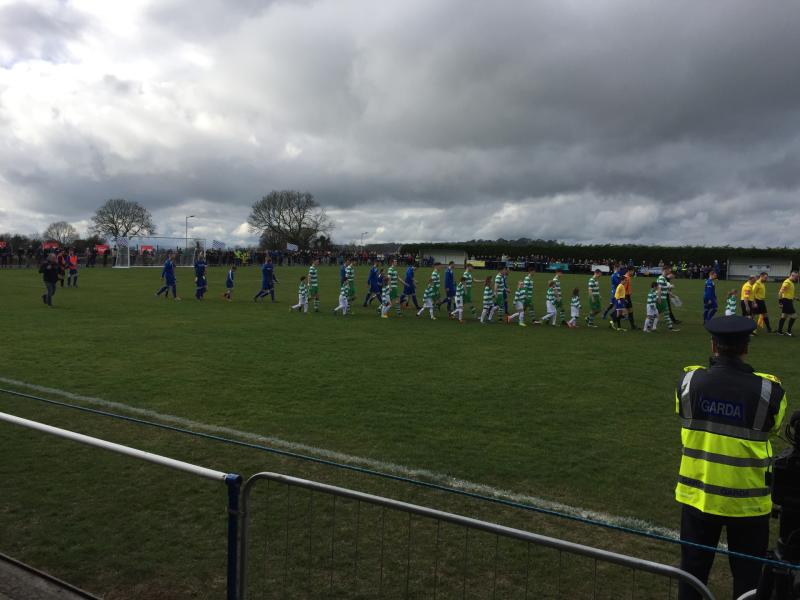 The two teams march out for the prematch parade.

It was a day to remember for Thomastown United as they roared their way into the next round of the Leinster Senior Cup with a win over a footballing Goliath.
Stephen Connolly was the man of the moment, firing home an injury-time winner that saw United Park erupt in ecstasy and send the mighty Shamrock Rovers packing.
Everything about the goal was the stuff of dreams. Sensing the game was heading for extra-time, United gave one last push. C.J. Browne led the way, charging from defence before spraying the ball out to Dessie Walsh. A clever pass picked out Connolly, who fired an unstoppable shot over Rovers goalkeeper Luca Gratzer.
The goal was everything Thomastown had craved. Led by Browne and Aaron Kehoe they had a bright first half, but faded on the restart. That allowed Rovers, who were led by the alert Dean Dillon and Gary Shaw, to exert their dominance in the possession stakes but for all their efforts they couldn't produce that final ball to make the goal they craved.
It seemed that both sides had settled for 30 minutes of additional action but, just as the game was heading for extra-time, Connolly struck to leave the huge home crowd screaming with delight. Thomastown were through to round five - Rovers were out!