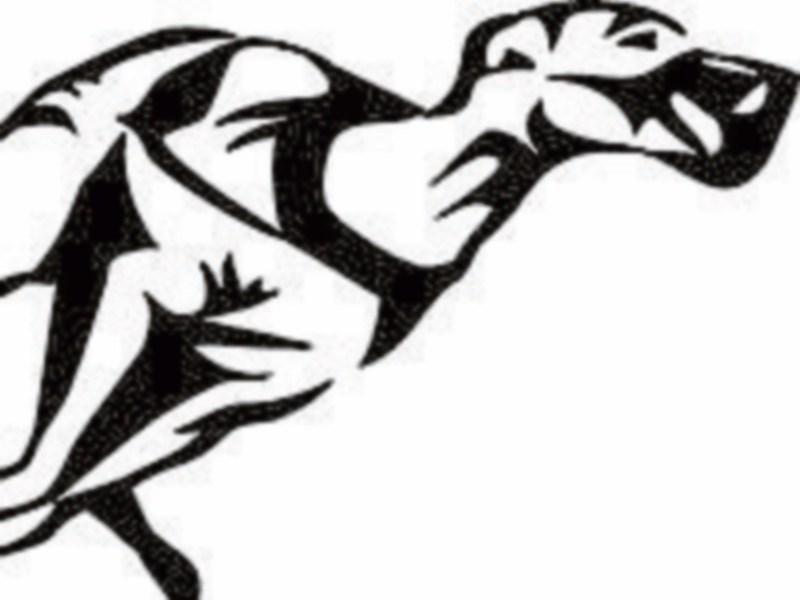 There was a night of competitive racing in St James Park, Kilkenny on Friday night with no less than six semi-finals on the card.

The stand out performance came from Chawke It Down in the Frightful Flash a2 Stake.

He became the first dog to break the 29 second barrier in Kilkenny this year, which was some going.

The favourite was well away and vied for the early lead with Sit Back.

Chawke It Down got the bend on the inner and then moved three lengths clear of Sit Back heading down the far side.

Five lengths to the good, the Paul Hennessy trained Chawke It Down (Vans Escalade-Locnamon Bridie), never missed a beat as he ran out a very impressive six and a half lengths over Sit Back in an excellent in 28.95.

The other a2 semi-final was won by Brackloon Titan.

In the a3/a4 stake there were wins for Pronto Tank and Ambitious Hylda.

The night began with a winner for trainer Derek Kehoe as Slaneyside Cora made all the running.

The winner got the better of Kellymount Cian into the bend and kicked six lengths clear heading down the far side.

The challenger clawed back two lengths into the third turn but could get no closer.

Hit Thediff Lad ran on late in the day but the race belonged to Slaneyside Cora, who won by three lengths in 29.99.

The opening semi-final of the 12  runner a4 bitch stake saw Hi Trend Minnie start fast from trap 3 and she led up.

The pace setter moved three lengths clear into the second bend but saw that lead reduced by a length into the third.

The pair crossed the line together with the verdict going to the Paul Hennessy trained Kilara Elvira, who got the better of Hi Trend Minnie by a short head in 29.89.

In the second semi-final, Foulkscourt Dawn and Triangle Serena started well and went to the bend together.

There was bumping at the bend and after it which saw Foulkscourt Dawn pushed backwards.

Triangle Serena was shading it at the second bend, a length in front of Kilgraney Vail.

The strong running Brownshill Ace was the surprise leader of the a3 race as he got the bend from the outer.

Once in front Brownshill Ace would be very difficult to pass, and so it proved.

Slaneyside Brady tried to make a race of it down the far side, but Brownshill Ace kept on motoring up front.

Crossing the line Brownshill Ace was three and a half lengths clear of Slaneyside Brady in a time of 29.51.

Heir I Go came out running in the fifth race and set the early fractions.

The pace setter went on and was two lengths clear of Knockroe Devil at the second bend.

Heir I Go was still two lengths clear at the third turn but now had the strong finishing Silverback Jack looming large in her rear view mirror.

Silverback Jack finished well but Heir I Go was determined to hold on. The duo flashed across the line together and could not be separated and a dead heat was called.

The Track Supporters Club a3/a4 525 semi-finals were  next up.

The opening semi-final saw Pronto Tank, the odds on favourite, in trouble early as he missed the kick.

Howsyerdaymissus took a flier from trap 5 but it was trap 6 Baileys Scolari who showed massive early dash to lead up.

Baileys Scolari went on to hold a five length lead over the improving Pronto Tank heading down the far side.

The jolly tried to go up the inner at the third but found the door shut and had to check.

Baileys Scolari kicked on but Pronto Tank came again to get up and win by three quarters of a length in 29.41.

In the second semi-final Trumera Wood and Ambitious Hylda started well on the outer.

The latter got the bend and slipped two lengths clear into the second bend.

There was no change into the third but in the latter stages the Sheila Devoy trained Ambitious Hylda asserted and pulled away to book her final place by four and a half lengths in 29.30.

The favourite Drama In Court was well away in the first semi-final of the a2 stake but had Brackloon Titan with him on the run to the first bend.

Drama In Court was a half a length in front at the second bend but it was Brackloon Titan who hit the front into the third bend.

Maggies Lucy was flying in behind the pair but ran into Drama In Court and her chance was gone.

The Murt Leahy trained Brackloon Titan eased away to take the victory by four lengths in 29.31 as Cats Belle came through for second spot.