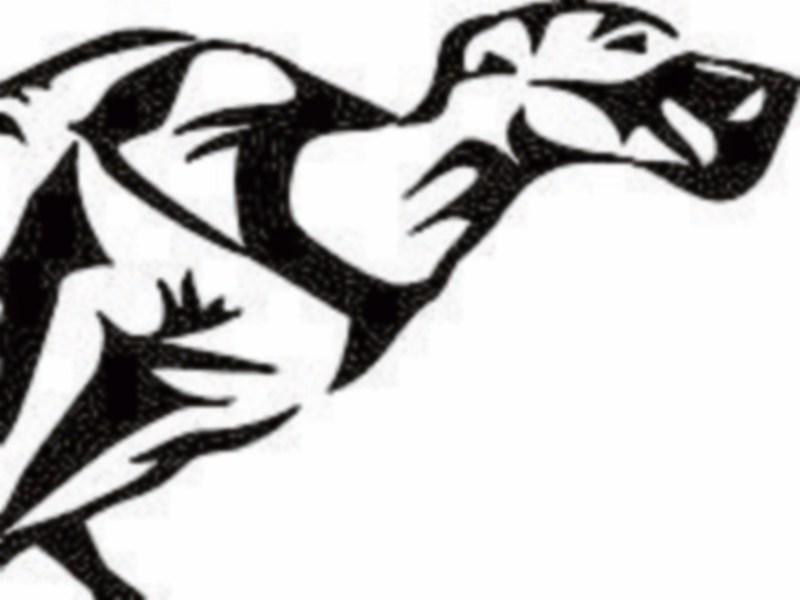 There were four finals on Friday night’s card at St James Park greyhound track with the Track Supporters a3/a4 stake final the most valuable of the quartet.

Pronto Tank went off as favourite but encountered traffic problems from an unfavourable draw and was never a factor.

Instead, it was the well housed Trumera Wood who led up on the rails.

The flying early pacer skipped five lengths clear into the back stretch  as there was plenty of  bumping behind.

John Phelan’s Trumera Wood continued to lead his rivals a merry dance down the back stretch.

The son of Godsend and Cavansheath Lass built up a large cushion and easily held off a late surge from Bubba Jet to win by two and a half lengths in 29.49, claiming the €1,750  first prize in the process.

The other finals were won by Chawke It Down and Bull Run Buzz, while Hi Trend Minnie and Triangle Serena dead-heated in the a4 bitch final.

The night began with the a6 stake final. Once again there was plenty of betting in the contest.

Bull Run Buzz was sent off as favourite but plenty of others had their supporters. The favourite battled it out early with Hillview Honey, with the former getting the bend on the inner.

Bull Run Buzz was three lengths to the good at the second bend but into the third Hillview Honey began to make progress.

However, the challenger took a misstep and her chance was gone. Bull Run Buzz raced on and held a late surge from Trade Shamrock by two and a half lengths in 29.29.

The second race was level early and into the first bend. Condor Max went on and was a length in front of Foleys Gift at the second bend.

There was no change into the third but there was still plenty of racing to be done.

Foleys Gift and Graigues Penny ran on and the trio crossed the line together.

In the end Condor Max just got the better of Graigues Penny by a short head in 29.66.

In the a4 bitch final, Hi Trend Minnie popped out of trap 3 and set the early fractions.

The leader ran the bends well and eased two lengths in advance of Triangle Serena and Kilara Elvira going down the back stretch.

The lead was still at two lengths as Hi Trend Minnie turned for home.

Triangle Serena ran on best and closed up as the line neared. A photo finish could not separate the pair as a dead was called in 29.60.

Bought out of the Kilkenny Sales last year, Kilmacar Hurrah continued her money spinning ways in the fourth race of the night.

After showing her pace to lead up, Kilmacar Hurrah slipped two lengths clear of Heir I Go at the second bend.

The leader maintained her advantage into the third turn and on the run home, she was untroubled.

Kilmacar Hurrah won for a fifth time in her career as she defeated Heir I Go by three lengths in 29.62.

Ballybough Dad looked the part on paper and on the track he was most impressive as he booked his place in this valuable stake.

The odds favourite led up from trap 5 and simply ran his rivals ragged.

Five lengths clear at the start of the back straight, the Murty Leahy trained Ballybough Dad galloped on to extend his lead to seven lengths turning for home.

Jacks Magic ran on to claim the second spot, but this race belonged to Ballybough Dad.

The winner was seven lengths clear crossing the line in a sizzling 28.94.

The a3 contest was level early on and into the first.

Condor Merlin got a dream run on the inner around the first turn and moved a length clear of Knockroe Devil at the second bend.

The lead was still at a length as Condor Merlin approached the third, but Slaneyside Brady was now the one in pursuit.

That was as close as it got though as Condor Merlin kept on motoring to win by five lengths in 29.74.

The fourth and last final of the night saw Chawke It Down sent off as an odds on favourite, but he did not enjoy the best of starts.

Instead, it was Sit Back and Drama In Court who showed up first.

Drama In Court went on and held a two lengths lead going down the back straight.

The lead remained intact into the third but Chawke It Down was now in close quarters.

The Paul Hennessy trained Chawke It Down stayed on strongly to get up close to home and claimed first place.

The winning distance was three quarters of a length in 29.34.

There was a length in it at the start of the far side but turning the third turn, the pair were level.

Bar The Sizzler closed up behind the pair and it was a three way go up the home straight.

Bar The Sizzler finished best to get and deny Rocky Dee Rocket by a short head in 29.61.