Captains celebrate as they drive into office in Callan 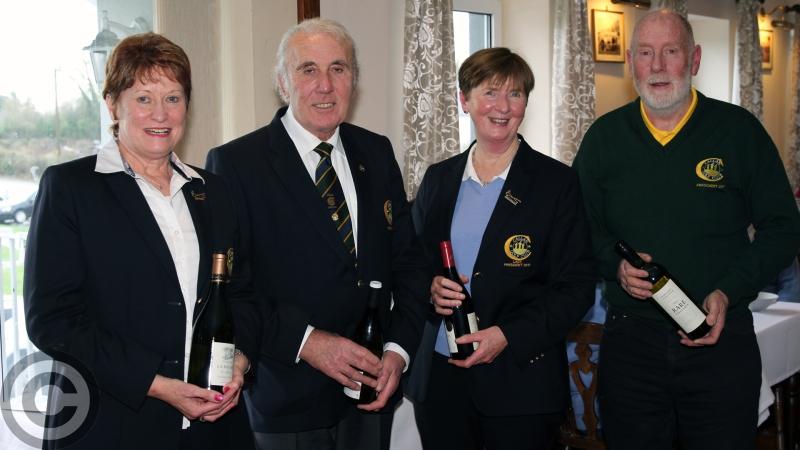 There was a great attendance as captains William Gilbert, Mary O’Hanlon and Junior Captains Elle Madigan and Cathal Brett held their drive-in at Callan GC on Saturday.
The clubhouse was buzzing from early in the morning, while an enjoyable four-person scramble competition was held after the drive-in.
For the first time in living memory the drive-in competition was won by the Captains team of Captain William Gilbert, Lady Captain Mary O’Hanlon, President Don Bolger and Lady President Olive Walsh. After the competition all enjoyed a meal in the clubhouse.
OPEN - The club will hold an open two-person team event on St Patrick’s Day (teams of any combination). The club will also hold the popular Club Classic open on April 14, 15 and 16. Prizes for this year’s competition will be announced shortly.
COURSE - Owing to the heavy rain the course was closed for a spell before its playability was reassessed.
RGA - Results, RGA team event, February 20: 1 Liam Duggan, Michael Grace, Liam Holohan and Michael Shortall, 41.3; 2 Michael Power, Luke Connery, and Tony Drennan, 41.8; 3 Paddy Grace, Seamus Brennan and Joe Kavanagh, 42.6; 4 Don Bolger, Jimmy O’Brian and Brian Pilbeam, 42.8.
Results, RGA 12-hole singles stableford, February 14: Cat A - 1 Patrick Mulrooney, 26pts; 2 Don Bolger, 23pts; 3 Tom Walsh, 22pts (c/b). Cat B - 1 Brendan McDonald, 28pts; 2 David Nye, 24pts; 3 William Gilbert, 22pts.
LEAGUE - With the adverse weather delaying its finish, the following changes have been made for this weekend’s Winter League action:
If 15 holes or 18 holes are opened, these scores will count, only 18 hole score will be displaced to bring back a previously discarded lowest score. If only 12 holes are playable or the course is closed the existing Winter League positions will stand as the final result.
LADIES - Results, ladies 12-hole singles stableford, February 22: 1 Margaret Comerford, 19pts (c/b); 2 Caroline Healy, 19pts; 3 Ann Croke, 19pts; 4 Teresa Phelan, 19pts; 5 Catherine Dore, 19pts.
The teams for this year’s Spring League have been posted in the ladies locker-room. The league will run until the end of March.
SINGLES - A better back three saw Ollie O’Connor win the men’s weekend 12-hole singles competition with 26pts. Jeffrey Lynch was second, also on 26pts.
Wednesday’s 12-hole open singles was won by Jack Drew with a fantastic score of 30pts.
INTER-CLUB - All ladies interested in playing on the inter-club teams are asked to put their name on the team sheets in the ladies locker room. Team managers have been named for the 2017 season. The Senior Cup manager will be Rose Brophy, Senior Foursomes Mary Lanigan, Intermediate Cup Catherine Davis, Minor Cup Kathleen Phelan, Challenge Cup Pauline O’Brien, Finn Trophy Jo Staunton, Boyne Cup Olive Walsh and Borris Cup Rose Brophy.
Group lessons have been organised with club professional Brian Doheny, the first of which will be held this Saturday. Contact Catherine Davis, or Mary Lanigan.
GET INTO GOLF - Get into Golf is for Ladies who are interested in taking up golf. It is a great way to start with the basics and meet other people. Places are available on a first come basis as the course is limited to 40 places. Further information from Betty McGrath, Coordinator or Lady Captain Mary O’Hanlon. Registration is on March 25.
LOTTO - There was no winner of the golf club lotto jackpot. Numbers drawn were 20, 23, 33. Lucky dip winners (€30) were Cathal O’Reilly, Gerard Woodcock and Noel Power. Sellers were Joe Cuddihy and Robert Woodcock. The jackpot is now €2,250.
DIARY - Today (Wednesday): Men’s open 12-hole stableford. Thursday: Senior Ladies, 10am to 12 noon. Friday: Social mixed competition, 2pm. Saturday/Sunday: Men’s singles stableford (final round Winter League). Monday: RGA, 12.10 to 1pm. Tuesday: Ladies nine and 12-hole stableford.

The score of 42pts was the target to reach in each of the singles competitions played at Mount Juliet GC in the past week.
John Stakelum hit the required figure to win in the Lemongrass Winter League on Sunday, while Pat Ryan scored the same in the Open Singles on Wednesday.
Sunday’s competition, which was played in testing conditions which included rain showers and a tricky wind, saw John Stakelum defy the elements when he returned 42pts to spreadeagle the field.
John scored nines of 19 and 23pts respectively for his round and had four shots to spare from Don Hannigan, with Frank Smyth in third place on 37pts. The ladies section was won by Freda Mullen with a score of 30pts.
With only one more round of the league to be played on Sunday, March 12 the leaders in the individual section are Paul Madigan followed by Liam Naddy. The team event is being dominated by Alan Hoyne’s team, with Paul Mullen’s team second.
OPEN - Pat Ryan (Bunclody GC) won the open singles stableford on Wednesday with his 42pts. He had seven shots to spare from his nearest opponent, Alan Murphy (Ballykisteen GC).
JUNIOR - The club held an open junior singles competition on Wednesday. Sophie Eustace was a first-time winner, recording a score of 38pts off her handicap of 36.
TEE TIMES - As and from today (March 1) tee times will revert back to a one tee only system.
RESULTS - Results, Lemongrass Winter League, February 26: 1 John Stakelum (16), 42pts; 2 Don Hannigan (16), 38pts; 3 Frank Smyth (17), 37pts. Ladies: 1 Freda Mullen (12), 30pts.
Results, 18-hole open singles, February 22: 1 Pat Ryan (13, Bunclody GC), 42pts; 2 Alan Murphy (16, Ballykisteen GC), 35pts.
DIARY - Sunday: Member/Guest fourball stableford. Wednesday, March 8: Open four-person team event.

The Captains’ drive-in will be held at New Ross GC on Saturday.
Captain Peter Goggin and Lady Captain Marie Therese Wall will endeavour to split the first fairway with their opening drive into office at 2pm.
A three-person champagne scramble will follow the drive-in. Both captains invite everyone to come along and enjoy the day.
SCRAMBLE - Results, open three-person scramble, February 18 and 19: 1 Andrew Ryan (4), Donal Hosey (4), and John O’Connor (7), 58.5; 2 Alan Somers (7), John Somers (11) and Trevor Moran (12), 58.9; 3 Kieran McGrath (13), Noel Murphy (14) and Tim Murphy (18), 60.3.
DIARY - Sunday: Four Star Pizza open fourball. March 12: March Medal. St Patrick’s Weekend: Carpet Gallery open fourball.
LADIES - The ladies will return to 18-hole competitions on March 8. Sponsor of the opening competition of 2017 is French’s Pharmacy.
GET INTO GOLF - The Get into Golf Initiative is fully subscribed now and will begin with an information meeting in April.
VOLUNTEERS - Thanks went to all ladies who have volunteered for various sub committees and committees since the beginning of the year.
SENIORS - The seniors escaped the brunt of Storm Doris, but had to contend with a biting northerly gale when they played their weekly outing on Thursday last. Taking the top honours with 87pts were Johnny Hosey (14), John Fitzpatrick (18), Pat Traynor (18) and Billy Redmond (19). Second place went to Eddie Keher (9), Steve Travis (18), John Joe Murray (19) and Martin Hartley (22) with 85pts, with Jimmy Furlong (8), Liam Glasheen (20), Robert O Dwyer (20) and Jamesie Wallace (23) third on 84pts.
On the draw board for March are John Shalloe, Billy Redmond and Johnny Watson.