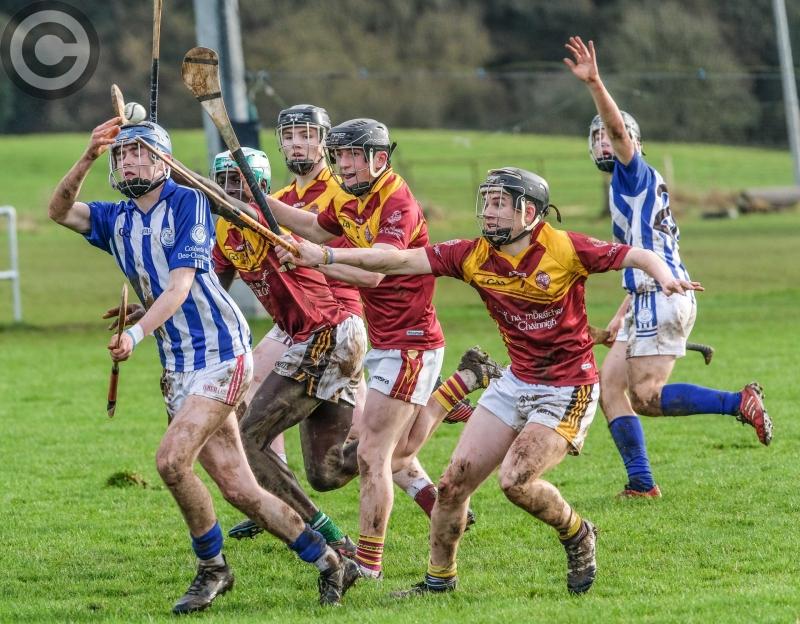 Ronan Buckley, seen here in action against Good Counsel, will be hoping to get the CBS back to winning ways on Tuesday next. Photo: Pat Moore

The senior hurlers from the CBS Kilkenny will be hoping to bounce back to winning ways when they start their Croke Cup campaign.

The James's Street side saw their Leinster hopes dashed when they lost to local rivals St Kieran's College last Sunday, but they can still end their season with championship silverware, as they tackle Presentation Athenry in their All-Ireland quarter-final on Saturday in Park Ratheniska (throw-in is 3.30pm).

The CBS made a brave stab at winning that Leinster final, only losing by four points in the end (1-14 to 0-13).

They started with a strong wind at their backs and were driven on by their captain Niall Brassil, who helped them into a 0-7 to 0-4 lead late in the first half. They could have been further in front, but a series of wides let Kieran’s off the hook.

"We really battled very well," said CBS mentor Matthew Ruth. "We were thrilled with the effort and spirit shown by the players, but our finishing was what let us down in the end."

Now they face a short turnaround and another tough task against Athenry, but the CBS are determined to give their all.

"It is a quick turnaround, but the lads are thrilled to have a second chance at the All-Ireland," he said. "We have to be positive. We are not gone from the All-Ireland series. I am sure the players will make the best of the chance ahead."

On the other side of the draw, Athenry manager Colm Larkin says it was no big disadvantage not knowing who their opponents would be for so long, until the provincial final had been played.

"No, we would have known both the St Kieran's and Kilkenny CBS teams pretty well this year, last year and over the past few seasons," he said.

"We would have played a few challenge games against each other and at this level there isn't much that we wouldn't know about each other," Larkin, a prolific scorer for Tynagh-Abbey-Duniry, adds.

However, Athenry will have to sweat it out while they learn of the availability of Connacht and Ireland Under 18 winger, Hugh Lane, who could be tied up with rugby commitments. Lane was one of four Connacht players who earned representative honours last November and is also a star hurler, having played at wing back last year.

"We'll just have to wait and see," Larkin says. "Hugh is very talented in both codes but I don't know if we will have him.

"If we don't other lads will have to step up. In the Connacht final I don't think we played anywhere near what we were capable of. But we still have some fine players with a fair bit of experience and club and county level and hopefully we can get back on track."