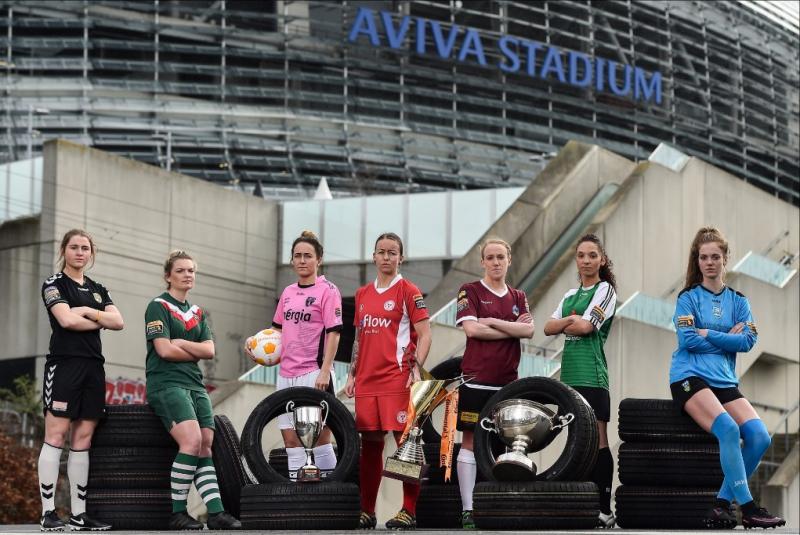 Kilkenny United's Ciara Delaney (far left) was at the Aviva Stadium for the launch of the new Women's National League season. Photo: Sportsfile

It's all systems go for Kilkenny United as they prepare to start their Women's National League campaign.

The Cats will have home advantage for their opening game as they welcome Peamount United to the Watershed on Sunday (kick-off 2pm).

The opening weekend kicks off on Saturday with all eyes on Shelbourne Ladies as they prepare to defend the title against Cork City WFC, Galway WFC, Kilkenny United WFC, Peamount United, UCD Waves and Wexford Youths WFC.

Set to enter into its seventh season, the Continental Tyres Women's National League will adopt a single calendar season for the first time - similar to the SSE Airtricity League.

Fran Gavin, FAI Director of Competitions, believes the growth of the League is aiding the development of women's football in Ireland at all levels.

"We are excited about the new Continental Tyres Women's National League season kicking off, as it should be really competitive again and switching to the single calendar format should result in better football being played," said Gavin.

"The League continues to go from strength to strength and that is evidenced by the rising number of girls who are being capped by the Republic of Ireland at senior, Under 19 and Under 17 level. It is a mark of the League's progression that it caters for so many international players.

"There is still more to be done to bring the League on and we are working closely with each of the clubs to make the necessary improvements. But as we prepare for the football to return, I would like to wish all of the players, coaches, administrators and volunteers the very best of luck."