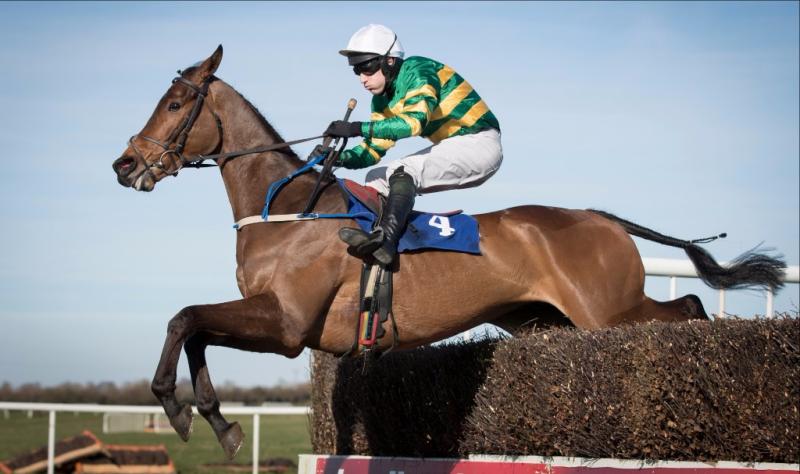 Aidan O’Brien and his daughter Ana shared a double as the flat season began with success for the family at Naas.

There were wide-margin wins for Alphabet, who took the 6f maiden by five and a half lengths, and Orderofthegarter, who trounced his rivals by 11 lengths in the mile three-year-old maiden.

The Leopardstown 2,000 Guineas Trial is the next likely step for Orderofthegarter, while O’Brien plans to step up Alphabet up to Listed or Group level.

Sent off at odds of 16-1, the eight-year-old powered home by one and a half lengths under Gary Carroll, beating Aussie Valentine, who was finishing second in the mile event for the third consecutive year.

It was an eighth victory for Brendan Brackan who has been a stable stalwart for the last number of years and has earned himself a tilt at another Group race.

Lyons earlier landed the 6f handicap with French import Gymkhana, the first horse he has trained for Carrickmacross-based Patrick Cassidy.

A return to Naas after an absence of 25 years was a time-tunnel experience for jockey Graham Lee, who landed the first Pattern race of the Irish season, the Group Three Park Express Stakes, on the Mick Channon-trained Czabo.

On January 25, 1992, Lee had his first ride in a race when he partnered Dosh for Noel Meade in a maiden hurdle.
Czabo, who finished fourth in last year’s Irish 1,000 Guineas, is owned by David Wachman, MV Magnier and Linda Shanahan and had started her season by beating only one home in a seven-runner Listed event at Saint-Cloud 15 days previously.

Fozzy Stack made a successful start to his training career when Gino Severini landed the 7f premier handicap under Chris Hayes, scoring by one and a half lengths.

It was Stack’s first day with runners, having taken over the licence from his father, Tommy, at the end of last year. Hayes, who is first jockey to Stack this year, is maintaining his link with his former boss Kevin Prendergast, for whom he won the first race of the season, the 5f maiden, on 4-1 shot Moonlight Bay.

Portadown trainer Stephen McConville celebrating the biggest success of his career at his local track on Sunday as his stable star Anseanachai Cliste landed the Toals Bookmakers Ulster National in dramatic fashion.

Anseanachai Cliste was controversially withdrawn from the St James’s Place Foxhunter Chase at Cheltenham nine days ago but that proved a blessing in disguise as he landed the highlight of the year at Downpatrick.

He jumped soundly and galloped on resolutely up the hill under Dylan Robinson to repel the challenge of Tulsa Jack by a head at odds of 8-1.

Sligo trainer Mark McNiff landed the 2m2f handicap hurdle on the card for the third year on the trot as the Andrew Ring-ridden Andratx gave McNiff his third win in a row in this race, landing a gamble having been available at 25-1 earlier in the day and returning at 7-1.

No Irish meeting can go by without a Liz Doyle winner right now and her hot streak continued thanks to Derulo in the Guinness Rated Hurdle. The 11-4 second favourite quickened up best after the last to beat Ballela Boy by six lengths in the hands of Wexford native Sean Flanagan.

Alan Fleming and Denis O’Regan, who teamed up to land the Close Brothers Novices’ Handicap Chase on the opening day of the Cheltenham Festival, were in the winners’ enclosure with Holly Flight in the opening 2m3f maiden hurdle.

Merrion Row made every yard on the running in the 2m3f handicap chase to give Tinahely trainer Phillip Rothwell a welcome winner. Clondaw Frisby won the 2m6f hunters chaser under Mark O’Hare and the 2m1f bumper was won in some style by the Dot Love-trained Dawn Shadow who was making it third time lucky at 9-2.

Great Field, one of the most talented and exciting novice chasers around, produced a scintillating front-running performance to land the Listed Pierce Molony Memorial Novice Chase at Thurles on Saturday under Jody McGarvey.

Not even a terrible mistake at the second-last could stop Great Field in his tracks as the 4-11 favourite steamrolled his rivals.
With a winning distance 32 lengths at the line the JP McManus-owned gelding may have earned a crack at a Grade One at either the Fairyhouse or Punchestown festivals.

Great Field was the highlight of a well-timed treble for Willie Mullins with the trainers’ championship in mind. Ruby Walsh was on board Open Eagle to win the 3m conditions hurdle after an absence of a year, and also earned a much-overdue success on Dicosimo in the 2m6f beginners chase.

It was a Saturday to savour for 20-year-old Cillin Leonard from Beaumont in Dublin as he celebrated his first winner on Supreme Steel in the 2m7f handicap hurdle.

Liz Doyle has her team in top form and La Bella Vida was too good in the opening Martinstown Opportunity Maiden Hurdle under J.J. Slevin, winning by six lengths from Tikken Away.

Templemore trainer Bill Harney teamed up with Eamonn Corbett to land the 2m4f handicap chase with 16-1 outsider The Conker Club, while the 2m bumper went the way of the Peter Fahey-trained Coldamour in the hands of Katie Walsh at odds of 6-1.

Both of Friday’s feature events at Dundalk went for export as James Given plundered the €15,375 first prize for the Download The Award-Winning At The Races App Race with Sign Of The Zodiac, while the Visit attheraces.com Race went the way of the Andrew Balding-trained Elbereth.

Sign Of The Zodiac spoiled the Gordon Lord Byron party as Tom Hogan’s globetrotting superstar had to settle for second behind the Pat Smullen-ridden 9-2 shot. Colin Keane swooped late and fast on Elbereth, who got up in the dying strides to beat 5-4 favourite Fire Fighting.

Champion jockey Smullen was in superb form as he helped himself to a 54-1 treble on the night. Sign Of The Zodiac was the tasty filling inside the sandwich but it was layered by victories on the Emmet Mullins-trained St Stephen’s Green in the 2m maiden and Tennessee Waltz in the concluding 1m handicap for Bansha trainer David Marnane.

Johnny Feane sent out the consistent Six Silver Lane to land the 1m2f handicap under Kevin Manning by a neck, while punters got the 6f handicap spot on as 4-1 favourite Lily’s Prince showed a willing attitude under Denis Linehan to get the better of Chicago School by a neck.

The 7f claimer went to Burn The Boats from the Johnny Levins stable. Donagh O’Connor was the winning jockey on board as he guided the 3-1 joint-favourite to a half-length win over main market rival Elusive In Paris.

Jessica Harrington has resisted the temptation to wrap her newly crowned Timico Cheltenham Gold Cup winner Sizing John in cotton wool and will aim the seven-year-old at the Punchestown Gold Cup.

A potential clash between 2015 Cheltenham Gold Cup winner Coneygree could be on the cards with Mark Bradstock previously stating that his stable star is likely to travel to Kildare for the Spring festival.