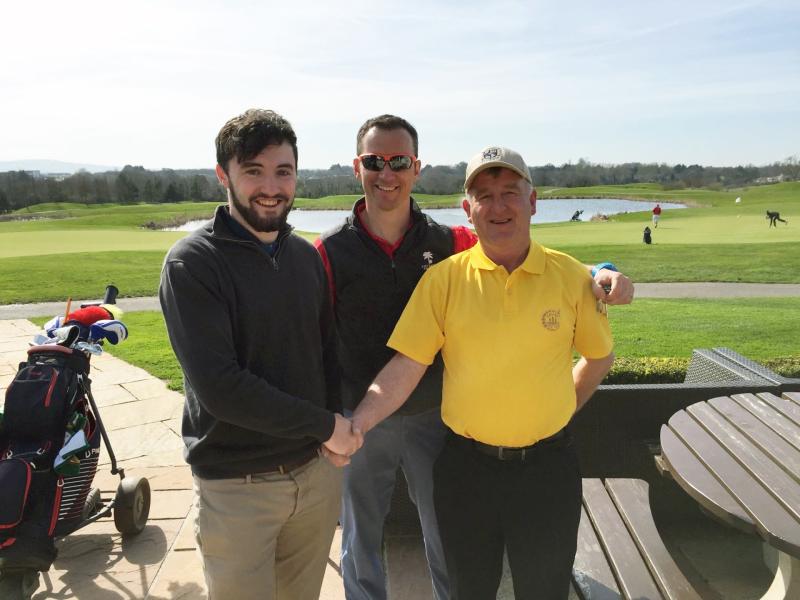 It’s not too a club has an All-Ireland winner in their ranks, but Callan GC do!

Paddy O’Donovan and a few other members, have been competing in the VoxGolf nine hole national competition over the last number of months.

Paddy, wearing the club colours, shot a fantastic nine hole score in Castleknock GC on Monday, finishing with 21pts to secure the All-Ireland crown and earn a trip to a Major Championship of his choice.

Paddy secured his fabulous win on the last hole. Facing a par three 150 yards straight into a gale, Paddy delivered a nine iron shot to clinch the title.

OPEN - Bookings are still being taken for the open club classic, which will be held on April 14, 15 and 16. Entry fee for the four-person champagne scramble event (any combination) is €60, with a special prize for the best all-ladies team. Bookings can be made online or through the pro shop, tel 056-7725136.

STABLEFORD - There was some very good scoring in the men’s 15-hole singles stableford at the weekend. Peter Ryan carded a score of 36pts to take first prize. Paddy O’Donovan was second with 35pts (B6) with Ollie Power third with 35pts also. John Moroney was fourth with 34pts thanks to a fantastic and very rare eagle on the par four 13th. The gross prize went to Paul Madigan with a score of 30pts.

LOTTO - There was no winner of the golf club lotto jackpot. Numbers drawn were 4, 21, 30. Lucky dip winners (€30) were Derek Halley, Tommy Fitzpatrick and Mark Duffy. Sellers were Tom Duffy, Paul Norris and Joe Cuddihy. The jackpot is now €2,650.

COURSE - Hollow coring of the greens has been postponed for the present. It will go ahead as soon as the weather improves and the course is fully dried out.

The Thursday Open Singles competition at Gowran Park GC will revert to a weekly event from Thursday, April 6, with a timesheet in place.

An open singles qualifier will be held every Thursday until August 31, with the top three finishers (plus equals) going through to final on September 1. First prize will be a pair of All-Ireland hurling final tickets and overnight stay for two in Citywest Hotel. Timesheets are available from 056-7726699 or online.

WINTER - Tomorrow (Thursday) and Friday will be the final chances to qualify for the Winter Series open singles. The final will be held on Friday, April 21, with all qualifiers to date notified. Entry fee is €20 for visitors, €5 for members.

NEW MEMBERS - The pre-season inaugural new members tournament is on this Saturday. The competition will be an 11-hole scramble with a draw for partners at 1.30pm followed by a 2pm tee-off.

EASTER - An open fourball competition will be held on Easter Saturday and Sunday, with an open three-person team event on Easter Monday. Timesheets are available from the golf office or online. Entry fee is €20 for visitors, €5 for members.

Michael Hoyne leads the way in Group One of the Spring League at Mountain View GC.

After two rounds of the competition Michael has picked up 150pts, with Michael Waugh and Ken Shaw close behind on 140pts apiece. In Group Two John Coffey leads the way with 200pts. John Coleman and Seamus O’Brien are his nearest rivals on 150pts each.

Entries are now being taken for the Foursomes matchplay competition at New Ross GC.

Intending players are asked to place the entry fee of €15 in an envelope and put it in the men’s competition box, together with name and contact details.

FOURBALL - The St Patrick’s Weekend Fourball competition was a smash hit, with a huge turnout of players from many different clubs. The weather was kind too, which added to the enjoyment for all competitors.

The top prize went to the Ballymoney pairing of Mick Walsh (18) and Mick Rossiter (18) with a great score of 49pts. Second place on 47pts was secured by virtue of a better score over the last six holes by the evergreen duo of Denis Kirwan (11) and John Murphy (17). On the same score in third spot came Paul Cleary (10) and Ger Freyne (18).

THANKS - Thanks went to all who gave their time and effort to help improve the appearance of the clubrooms and surrounding areas in recent weeks. These include Martin Carroll, Harry Reinhardt and Michael Cullen, who gave freely of their time and expertise in preparing the premises for the coming season.

QUIZ -  Davy Doran & Co emerged winners in the latest round of the table quiz. The “Daisy Cutters” team of Hugh Behan, Paddy Shannon, Tommy Tyler and Larry Shannon were the overall victors of the quiz, which has now concluded until Autumn.

LADIES - Wednesday was a very cold day but the ladies braved the elements to compete in the Glanbia 18-hole stableford.

The first match of the inter-club season will see the Ladies Intermediate team travel to Waterford Castle GC to take on Tramore on Saturday.

On Sunday the Challenge Cup team are out to do battle against Wexford in Enniscorthy. Supporters are welcome for both ties.

With the greens now approaching their very best all players are reminded to repair pitch marks on them and to replace divots on the fairways.

Seniors are reminded that the draw for teams is at 10.40am sharp. All wishing to take part should be in house by 10.30am.

LOTTO - There was no winner of the golf club lotto jackpot. Numbers drawn were 4, 15, 17 and