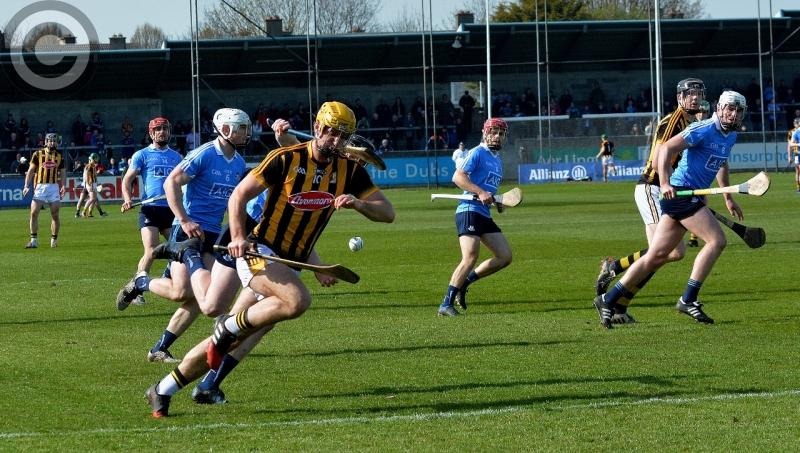 Kilkenny have had their fair share of high stakes games over the years, and this fifth round shoot-out with Dublin in Parnell Park was no different.
It was an ideal, light pressure situation for Kilkenny’s younger players.
The reward for a win was a spot in the National Hurling League quarter-finals.
A loss would have meant the Cats would have to play a relegation final. Better to avoid that situation.
The chance of having new players, a new team, perform in high intensity games such as this one serves as great preparation for the Leinster championship.
Ideal conditions
The game on Sunday was blessed by being played in ideal conditions for hurling, and what transpired certainly whetted the appetites for the Summer ahead.
There was a warm temperature and little wind which benefited free takers on both sides.
Kilkenny opened against the fresh breeze. T.J. Reid opened the scoring with a lovely point after shooting over his shoulder.
This was answered by points from Dublin’s Chris Crummy and Ryan O’Dwyer. Dublin were missing the recent All-Ireland winning Cuala contingent.
However, that didn't hinder them in the slightest.
Their slick passing was causing the defence all sorts of trouble, and Kilkenny had to rely on the quick reflexes of goalie Eoin Murphy to get out them out of trouble on a few occasions.
A quick word on the ref - eree. T.J. Reid took a free during the first half with a Dublin player standing very close waving his hurley in the air.
It appeared to be orchestrated as a distraction. It worked. T.J. drove the ball wide.
The rule in place is that players must stay at least 10 yards away from the opposing player when they are taking a free. The rule must be enforced.
It is no advantage to the person taking the free otherwise. In fact, it reduces the chance of scoring, thus penalising the team that has been awarded the free, which is supposed to be a punishment for a foul.
Let’s hope other referees have a different take on the situation than was the case on Sunday.
Kilkenny got a vital goal in the 11th minute. The scorer was Conor Martin after a wonderfully accurate pass from Colin Fennelly.
Fennelly was really motoring at this stage and his work-rate was a key advantage in the Kilkenny forward line.
Excelling
Points were exchanged by Donal Burke, who assumed the Dublin free taker role for the afternoon, Conor Martin, who would finish the game with 1-5, and the ever reliable T.J. Reid.
Dublin were excelling in what was a familiar environment. Players such as Chris Crummy and Liam Rushe were counteracting the roving style of the Kilkenny forwards.
There was drama in the 30th minute when Gary Maguire went to stop Liam Blanchfield’s daring run into the Dublin goalmouth, meeting him with a dangerous challenge.
Confusion
The ball ended up in the back of the net, however. There was confusion as to whether or not the goal would stand, because of the foul committed against Blanchfield.
Referee Paul O’Dwyer ended up awarding it, but not before he dismissed Maguire for his challenge on the Kilkenny forward.
Maguire’s dismissal created a few problems for Dublin.
Conor Dooley came off the bench to replace Maguire, and Eoghan Conroy was taken off.
This meant Dublin operated with five forwards which hindered any chance of truly terrorising the Kilkenny defence.
This did not stop the home side from trying to sneak a goal in the dying minutes of the first half. Eoin Murphy pulled off a superb save to deny Ryan O’Dwyer.
The first half ended with Kilkenny ahead: 2-5 to 0-10.
For the second half Kilkenny replaced the injured Padraig Walsh with Joey Holden.
Padraig had played a great first half, despite being hampered after being injured in an challenge.
Joey Holden tried hard and linked up well with his other defenders, but the full back line was jittery after Walsh’s departure.
Dublin identified this and they scored a goal in the 37th minute thr0ugh Donal Burke.
Despite the fact they were down a man, Dublin were still able to work the ball into the forwards and they caused problems for the visitors.
Richie Hogan scored a point during this time that helped settle Kilkenny nerves. Hogan had a quiet afternoon by his own high standards, but he seemed to be nursing an injury, which affected his ability to make the impact he usually has on the game.
T.J. Reid and Walter Walsh worked incredibly hard on the half forward line against the tough, dynamic duo of Rushe and Crummy.
Kilkenny slowly got to grips with the extra man in the closing 15 minutes or so.
Points from Conor Martin, Walter Walsh and Liam Blanchfield helped ensured that Kilkenny got into the driving seat.
Thus they motored into the League quarter-finals. Progress!
The Noresiders will meet Wexford next weekend in what will be a nice dress rehearsal for a possible Leinster championship encounter in June.
Wexford are flying high at the moment after a good League campaign and after regaining a place in Division 1A under the dynamic stewardship of new manager Davy Fitzgerald.
Good to have them back!
Terrific clash
This is an encounter Kilkenny supporters will certainly be relishing.
Wexford people? No better fans to get out and support their team at the merest hint of a decent victory.
They will pack Nowlan Park.