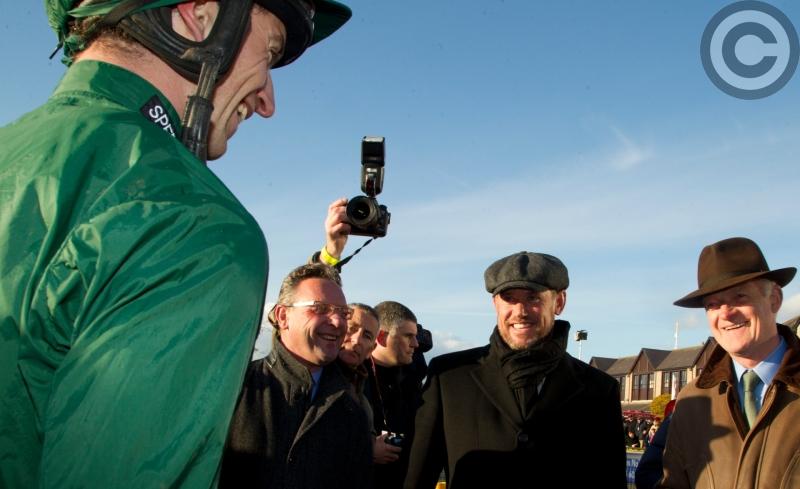 Willie Mullins has been leading trainer at each of the last 11 Punchestown Festivals (and 14 times in all) and he is set to unleash a fabulous team at this year's event, running from Tuesday, April 25, to Saturday, April 29.

Mullins is currently playing second fiddle to Gordon Elliott in the Irish trainers' championship but Punchestown is likely to have a crucial bearing on the title race, with over €2.9 million in prize money on offer.

All eyes will be on the fantastic Annie Power, who Mullins has confirmed is set to have her first start since last year's Punchestown Festival. The brilliant mare missed the Cheltenham due to a knee ligament injury.

"Annie Power is in good order and she is working well in preparation for Punchestown," said Mullins. "We're very happy to have her back obviously and looking forward to seeing her out again.

Djakadam finished fourth to Sizing John when sent off 3/1 favourite for the Cheltenham Gold Cup and Mullins is happy to take on that rival again in what should be a brilliant Grade 1 Coral Punchestown Gold Cup on Wednesday, April 26. The 3m 1f showpiece is also the target of 2015 Cheltenham Gold Cup hero Coneygree.

"I was disappointed with Djakadam's run in Cheltenham as I thought he was in great form going into the race but hopefully he'll return to form in the Coral Punchestown Gold Cup as he likes this track," said Mullins.

"From only four starts over Punchestown's fences, he has won two John Durkans and finished second in the Gold Cup twice. With two of the last three Cheltenham Gold Cup winners likely to run in this year's race, Coneygree and Sizing John, it looks like it will be an exceptionally strong renewal, which is as it should be. More and more English owners want runners in Ireland, or now have their horses trained here, because of the excellent prize money on offer."

Un De Sceaux proved one of the stars of this year's Cheltenham Festival when winning the Grade 1 Ryanair Chase over 2m 5f in superb fashion and Mullins has confrmed he will step back to two miles for the €250,000 Grade 1 BoyleSports Champion Chase on Tuesday, April 25.

"I'm very happy with Un De Sceaux," added Mullins. "He was brilliant when winning his third consecutive Grade 1 chase at Cheltenham last month and given he's unbeaten in three starts at Punchestown, I'm very much looking forward to seeing him contest the BoyleSports Champion Chase."

In-form Ballycasey will be joining Un De Sceaux in the same race.

"Ballycasey has had a great season thus far, recording four wins - three in Grade 2 company - and he will come back in trip to contest the two-mile Grade 1 Boylesports Champion Chase on the opening day of the festival.  He's well after his Fairyhouse win." 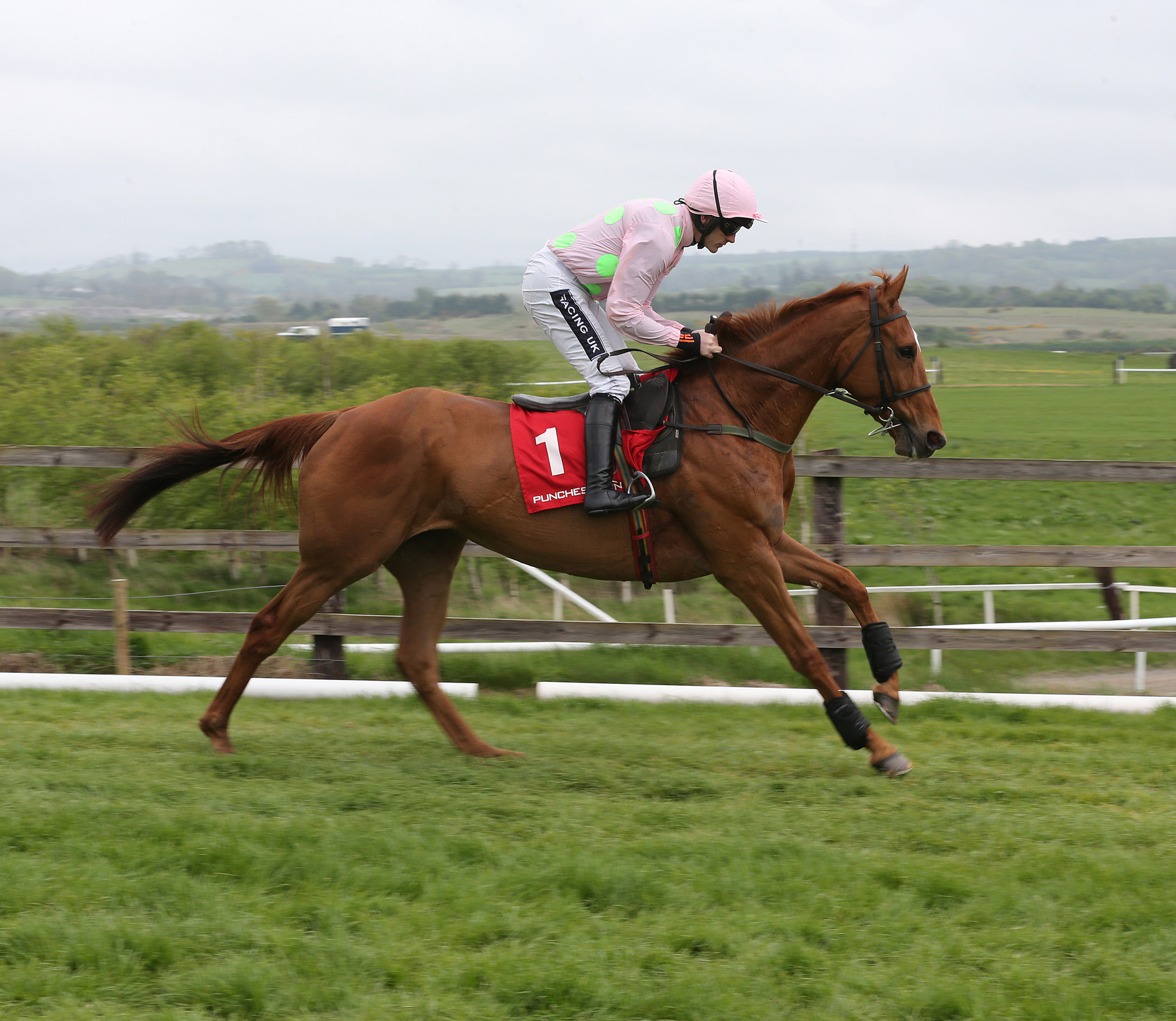 Annie Power has been working steadily towards Punchestown

The G1 Ladbrokes Champion Stayers Hurdle at Punchestown on Thursday, April 27, promises to be a race to savour with Nichols Canyon, winner of the Stayers Hurdle at Cheltenham, set to line up in the €250,000 contest. Lil Rockerfeller and Unowhatimeanharry, the Cheltenham second and third, look set to reoppose while Mullins has not ruled out running Arctic Fire, winner of the County Handicap Hurdle under top-weight at Cheltenham.

The eight-year-old also has the option of the two-mile BETDAQ Punchestown Champion Hurdle on Tuesday, April 25.

"Nichols Canyon is fine and he will go for the Ladbrokes Champion Stayers Hurdle," said Mullins. "Arctic Fire has come out of his County Hurdle win at Cheltenham very well and he is on course for Punchestown. He'll probably go for the BETDAQ Champion Hurdle at this stage but he has won over two-and-a-half miles so the three-mile Ladbrokes Stayers Hurdle could be an alternative for him as well. We'll keep all options open until closer to the day but he is in great form."

Alongside Annie Power, Mullins has usual formidable team of mares, including the progressive Let's Dance, winner of the Grade 2 Trull House Stud Mares' Novices' Hurdle at Cheltenham on her latest start.

She is likely to stick to novice company at Punchestown while the gutsy Vroum Vroum Mag has a whole array of possible targets, with her entries including the Coral Punchestown Gold Cup and BoyleSports Champion Chase over fences.

"Let's Dance has kept on improving all season," said Mullins. "She was second in the Grade 1 AES Four Year Old Hurdle at Punchestown last year and has won all five of her starts since. I was very pleased with her win at Cheltenham and she's come out of it in good form.

"Whilst she's in the Irish Stallion Farms EBF Mares Champion Hurdle, it probably makes sense to stick to novice company with her this season and so the Tattersalls Ireland Champion Novice Hurdle over 2m 4f or the Irish Daily Mirror Novice Hurdle over three miles are the more likely options for her.

"Vroum Vroum Mag is so versatile she could go anywhere. She holds an entry in both the BoyleSports Champion Chase and the Coral Punchestown Gold Cup over fences but at this stage we'll probably stick to hurdles with her for Punchestown so we'll pick between the BETDAQ Champion Hurdle, the Ladbrokes Stayers Hurdle and the Mares Champion.

"Melon is in great form after Cheltenham and will go for the Herald Champion Novice Hurdle where he could be joined by a few of his stablemates as well," added Mullins.

"With three consecutive wins over two miles under his belt, Bleu Berry looks an exciting young horse. He is in the Herald Champion Novice over two but at the moment it looks like we might step him up in trip to contest the Tattersalls Ireland Champion Novice Hurdle over two-and-a-half miles. He's in good form.

"Penhill has various entries but he is being aimed at the three-mile Irish Daily Mirror Novice Hurdle, that's the race for him. He's in good nick too."

Mullins has no shortage of rookie talent over fences with Great Field, a 32-length winner at Thurles last month, being aimed at the two-mile Ryanair Novice Chase on Thursday, April 27.

Yorkhill, winner of the JLT Novices' Chase, is also in that race and the 3m 1f Growise Champion Novice Chase on Tuesday, April 25. He is likely to start at Fairyhouse this weekend so plans are fluid at present.

"Great Field is unbeaten in three starts for us over fences and he just keeps on improving.  He'll go for the Ryanair Novice Chase over two miles where better ground should be to his liking," added Mullins.

"Yorkhill returned from Cheltenham in good form and I'm happy with him. He's in at Fairyhouse this weekend so we'll have to see about Punchestown after that. He is in both novice chases at Punchestown and I'm not sure which he'd go for."

Meanwhile Bapaume, runner-up in the Triumph Hurdle at Cheltenham, is set to try and go one better in the Grade 1 AES Champion 4YO Hurdle on Saturday, April 29. Several stablemates could be in the field including French import Orion D'Aubrelle, who has yet to run in Ireland.

"Bapaume came out of Cheltenham well and is being aimed at the AES Champion Four Year Old Hurdle on the final day of the Festival where he might be joined by Dandy Mag, Meri Devie and possibly a new recruit from France in Orion D'Aubrelle," continued Mullins.

"There are some very good bumpers at Punchestown too and we have a nice team of horses to contest those."

The 10-time champion trainer had 12 wins at last year's Punchestown Festival, just below his amazing best of 16 in 2015, and he reiterated how important Ireland's Jump racing showpiece was to him.

"Punchestown attracts the best horses to this Festival every year because they have the best prize money, it's that simple," said Mullins.

"Everyone there does a great job and whilst the sun is often shining they consistently produce lovely, safe ground year after year, which is why we love it. The atmosphere there is fantastic too, there's a real buzz about the place."