Evergreen's win was "a day for our club to savour" - Andrews 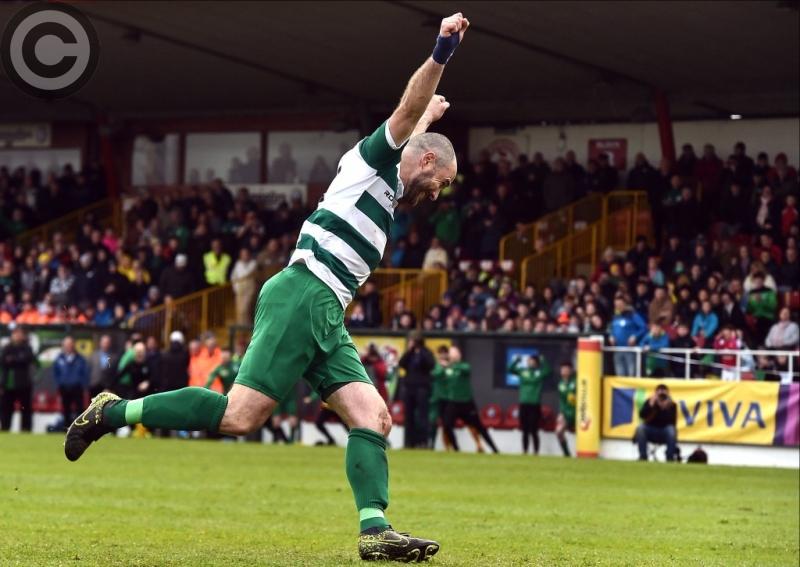 Junior internationals, League of Ireland games, Oscar Traynor finals - none can compare to the thrill of getting the chance to lead your local club out at the Aviva Stadium for the FAI Junior Cup final.

“I won’t complain,” Evergreen captain Niall Andrews said with a smile as he reflected on Evergreen’s nail-biting semi-final win over Boyle Celtic, a win which saw the Kilkenny side reach the final of Europe’s biggest amateur cup competition.

“The junior international was a brilliant experience, League of Ireland was good too, but this is what it’s all about. It’s about winning with your friends - I’ve been in the same teams as Jelly (Brian Jordan) and Packie (Holden) for years. There’s nothing like it.

“I always refer back to the club hurlers, who get to go to Croke Park on St Patrick’s Day,” he added.

“When you hear people like Henry Shefflin saying it’s the final that they win with their friends that means the most, well it’s the same for us.”

It wasn’t just the players who were on cloud nine after Sunday’s 4-2 shoot-out win at The Showgrounds in Sligo.

“Look at what that win meant to the people who came up here to cheer us on,” said Andrews. “People like Peter Henebry and Mick Hennessy - they were in tears.

“They’ve built this club,” he added. “Remember, we didn’t have a home ground not so long ago (the club bought their Kells Road base in 2000). For a club like ours that’s incredible.

“Those guys put themselves under incredible pressure to buy that land and the club rowed in behind them - there were people who joined the 500 Club (a fund-raiser established for club members). My late father set up a standing order which is still going through. I hope he was looking down on us today.”

Andrews was ice-cool as he stepped forward to take what proved to the decisive penalty after 110 energy-sapping minutes.

“The calmest man on the pitch? I don’t know about that!” he said with a grin.

He was quick to play down his role, preferring to talk about the collective spirit that had helped deliver the right result for Evergreen.

“When it comes to taking penalties you pick your spot and go for it,” he said. “If the ball goes in, it goes in.

“For me, the hero of the penalty shoot-out was Packie Holden,” said Andrews, deflecting the praise away from himself. “He got so close to saving all their kicks, saving the second and getting his hand to the third.

“It’s all about the hard work the lads have put in,” Andrews added as deafening cheers echoed from the Evergreen dressing-room. “You can hear what it means to the lads in there.” 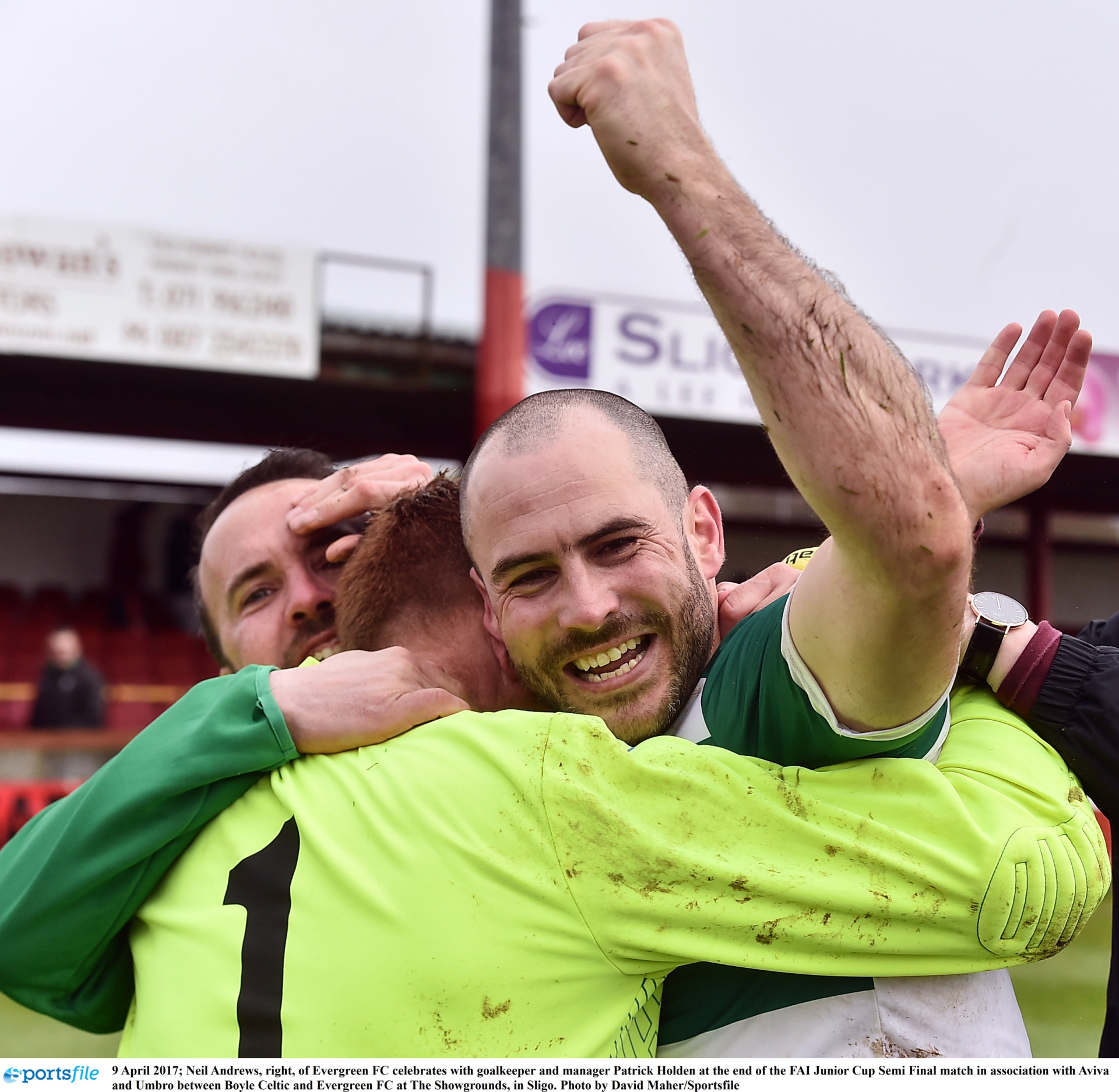 The captain reflected on a tough game, praising Boyle Celtic for making life difficult for their Kilkenny opponents.

“It was hard work coming up to Sligo for the game,” he said. “It was a tough game with a big crowd against us. Boyle are a very, very good side who got the ball down and knocked it around.

“They were physical too, a strong team,” he added. “We were flagging a bit there at one stage. In fairness the club did everything to prepare us for the game, but we still had that journey in our legs.

“We have been a little unlucky with injuries this season too, and have played a large part of the season with a base of 14 players.

“However, now you can see the squad is back – being able to bring in the likes of Sammy Johnston, Decky McQuillan has been a huge boost for us.”

And it wasn’t just the present players who could share in the spoils of victory, he reckoned.

“This win isn’t just for the players inside in that dressing-room,” the captain said. “As I said it’s for men like Mick Hennessy and Peter Henebry, but the players too like Brian Holden, Mark Andrews, Kevin Cashin, Davy Mulcahy – they’re the guys I grew up watching, guys who made me want to play for Evergreen. It’s as much for them as us.”

Making a final is no easy feat, but Andrews believes that taking a professional approach has paid dividends.

“Getting to the final is where this club has wanted to be,” he said. “The lads (management team of Packie and Brian Holden) have set us up to try and be as professional as we can.

“We’re lucky to turn up and have everything laid on for us,” he continued. “Look at what the club did this weekend at no cost to the players - they provided gear, the hotel, meals, training, trying to do everything as professionally as possible.

“They’re doing the hard work behind the scenes,” he said. “That’s why this win is a club thing - it’s for everyone. We are one of the biggest clubs in the South-East, the schoolboys’ section is so strong.

“There were plenty of them up here to watch the game,” he added, speaking of the younger members of the Evergreen brigade who were in Sligo. “You’re trying to create a legacy for them; this is where the club should be. It’s where want to be, and we make no bones about it.”

The club will be abuzz in the build-up to the final, something Andrews feels everyone should appreciate.

“This is the level we want to be at every season, but it’s 18 years since that last semi-final appearance,” he cautioned.

“We know it doesn’t come around every time, so you have to take the chance when it presents itself. There were times when we had to sit in there against Boyle, really dig in when legs were tired, but we did what we had to.

“I felt we had the better of the game’s clear-cut chances,” he added, offering his view on the game.

“Coming to a semi-final, an away game where the stand is full of their supporters, you know it’s going to be a difficult one. It take serious resilience, real belief, to get through the game.

“Boyle may have had more of the possession, so it was very much like the Kilmallock game (the quarter-final) but we’ve developed a maturity about the team so that, in the bigger games we’ve played, we have the ability to dig in. We’ve gone to the well a couple of times, but it has stood to us.

“Before the penalty shoot-out I said to the players that I couldn’t be happier about how we had played,” he added. “Whatever happened, we left everything out on the pitch and we had no regrets.”

For someone who has been involved with the club for as long as Andrews has, making the final after all these years has been incredible.

“I don’t think it will sink in for a while that we’re going to be playing in the Aviva Stadium, but we’re good enough to be there” he said. “We have players with real ability. There are players there like Mikey Drennan, Sean Barcoe – how he hasn’t been capped by Ireland I don’t know as he’s been outstanding on this Cup run – Brian Jordan and Dylan Whearty.

“We are a good side. We’re big, we’re physical, we can get it down and play. We have balls about this team too, players who are ready to fight for the side.”

And a fight is what they will face in the crunch final in May.

“We’re playing Sheriff, so that’ll be fun (he said with a rueful smile) but after playing them last year I have to say they’re a super side.

“How they keep coming back I’ll never know,” he added. “It’s taken 10 games to reach the final - we will have played 12 league games this season - and they’ve done that for the last four or five years.

“They’ll be a tough nut to crack, but we’re looking forward to the final - how could you not look forward to a game like that?”

It hasn’t always been plain sailing for Evergreen, as Andrews acknowledged.

“I remember getting knocked out in the first round of the FAI Junior Cup at home to second division Wexford side. We’ve been through the mill at times, but it’s days like these that make it all worthwhile.”

And now they’re in the final, Evergreen will want to go all the way.

“Packie said it, we want to win an FAI Junior Cup,” said Andrews. “We’re a big enough club to do it and we think we have enough about us to do it.

“I know people might say ‘you can’t say you want to win it’ but why not?” he asked. “Why not dream about winning the FAI Junior Cup?”