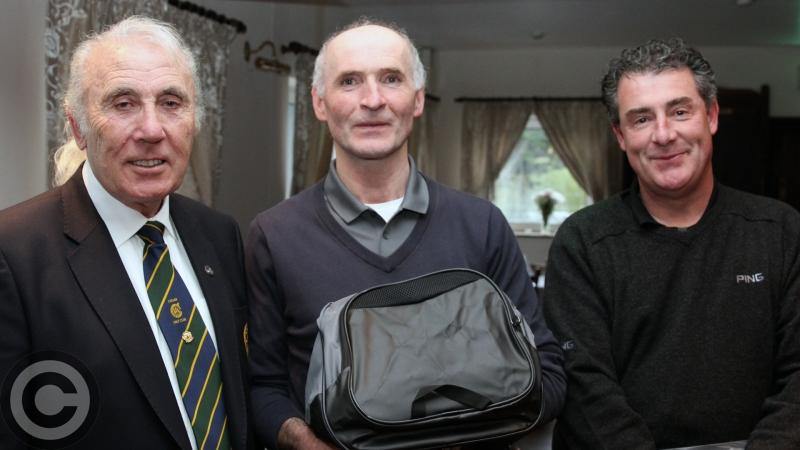 Five teams will fly the Mount Juliet GC flag when they feature in interclub competitions this week.

The juniors (under-15 years) take on Castlecomer over two legs tomorrow (Thursday) and Sunday.

The ladies Junior Cup team, which is managed by Dorothy Kilroy, play Woodenbridge in Bunclody on Saturday, while the Duggan Cup team play Castlecomer with the Barton Cup team playing Gowran Park on Saturday also.

To round off the matches the mixed foursomes team, managed by Peter Quigley and Bernie Madigan, play New Ross on Sunday.

INVITATION - The Men’s Invitation Day for members and guests produced one of the highest scores in a four-person team event. The winners returned a great score of 105pts, which included three bonus points for visitors. The format was for two scores to count on the first 17 holes and all four scores to count on the 18th hole.

Play was off the white tees, with a stiff breeze making scoring on the last difficult. Although the winners scored eight points on the last hole they had already accumulated 94pts - their nearest rivals were 14 points behind. The winning team was led by Martin Brett, with the runners-up led by Tom O’Brien.

FOURBALL - Sunday’s member/guest fourball stableford saw the leading three teams all return 44pts. Winners on a countback were James ‘Cha’ and Enda Fitzpatrick, who pipped Mark Taylor and Damien Walsh to the spoils. Thomas Hession and M.J. O’Farrell were third.

The Club Classic champagne scramble, sponsored by Friary Walk Development, was a big hit at Callan GC over the Easter Weekend.

The RGA competition on April 24 is for the Jack O’Shea Trophy.

COURSE -The course manager reminds all players that the practice putting green is for putting only - practice chipping onto the green is not allowed.

The Ladies Intermediate team will take on Rathdowney GC in Bunclody on April 23. The team is managed by Catherine Davis.

Out first at home was Martin Cuddihy, who played some superb golf and his match ended up being the deciding match on the 19th. The youngest and the most senior players on our panel, Liam Hennessy and Liam Duggan, both played some amazing golf to win their respective matches on the 16th. Tommy Hennessy lost his match to a stronger opponent on the day. Meanwhile, in Kilkenny Pat Hickey went down to Richie Power while John Doheny lost an up and down game. Jamie Tennyson had a great win on the 14th while Paddy Grace won his match on the 18th.

With the match all square the tie went down to Martin Cuddihy’s final match in Callan. Two down on the 16th, Martin won the 17th hole before a great chip saw him level matters on the 18th. On the 19th hole Martin had a very difficult chip cross slope from the left of green. His shot slid downslope and away from the hole. His opponent took his advantage, winning the hole to win the match for Kilkenny.

BARTON - The Barton Cup team also played Kilkenny GC in their first round tie. First out in Callan were Jeffrey Lynch and Martin Cuddihy, who were called in when leading on the 17th. In Kilkenny John Doheny and Niall O’Sullivan put on a display of golf to win on the 13th, while Nicholas Walsh and Keith O’Dwyer brought their game in after 14 at five up. Mick Hickey and Andrew Needham, the third match in Kilkenny, were called in.

RAFFLE - Winner of the Easter Hamper was Paddy O’Donovan. Second prize of a bottle of wine went to Bridget Holohan, with third prize of an Easter Egg going to Geraldine O’Sullivan.

LOTTO - There was no winner of the golf club lotto jackpot. Numbers drawn were 5, 25, 29. Lucky dip winners (€30) were Joe Delahunty, Marie Dooley and Mick Fitzpatrick. The jackpot is now €2,950.

There was no luck for the Castlecomer GC Irish Men’s fourball team as they lost 3 ½ to 1 ½ against Gowran Park GC on Saturday.

Gowran won two of their home fixtures and one away, which was sufficient to call in the final fourball.

The course was excellent, with the recent dry spell resulting in run on the ball. A testing West to North-West wind made for an enjoyable challenge. The chat and friendly banter afterwards summed up what sport is all about - a wonderful game when played in the right spirit. Thanks went to team manager Pat Haughton for his input and to all 10 players.

SENIORS - A total of 39 senior golfers turned out for the much awaited Bog Oak competition.

One of the big events on the senior calendar, the Golfer of the Year competition attracted 39 participants. With a testing North-West breeze, golfers faced a solid challenge. The balance on the day was wonderful, since the 14th pin position, about seven feet from the fringe on the river side, provided a superb test of accurate chipping and steady putting.

A big field went out in search of the coveted Spring Cup at New Ross GC.

The ultra-consistent Noel Kendrick (15) took the trophy with a nett score of 66. He was closely followed in second place on 67 by Declan Clark (15) with Martin Forristal (20) third with a nett 68 by virtue of a better back nine.

Michael Ryan junior played some great golf to take the gross with a sparkling 66. Rory Hussey playing off 8 won Category 1 with a nett 72 whilst George Foley (13) scoring 71 took the category 2 prize and Brian Teague (15) also with a 71 won category 3.

FOURBALL - The Tuesday evening fourball, sponsored by the Ross Inn, saw low handicappers Michael Kelleher (5) and Rory Hussey (8) take the honours with 23pts. In a tight finish Lily English (36) and Mary Furlong (35) claimed second place by virtue of a better score over the last three holes. Michael Cullen (9) and Eamon Walsh (19) were third on 22pts.

LADIES - There was great interest in the ladies greensomes competition, a qualifier for the Australian Spoons.

This week’s competition an 18-hole stroke. There will also be a gross prize as well as prizes for nearest the pin and longest drive for extra interest. The Katie Bailey Trophy will be awarded to the winner for best stroke score. Draws at 10am and 2pm.

JUNIOR - The Junior Cup will take on Kilkenny Gc in Waterford at 3.30pm tomorrow (Thursday). All support welcome.

For the Summer season all senior competitions will be played off the yellow plate markers.

The seniors will host their friends from Faithlegg GC tomorrow (Thursday). The competition, an 18-hole champagne scramble, has a shotgun start at 10am. All locals should be in the clubhouse by 9.30am to finalise teams and their starting tee boxes.

The Rathdowney GC Barton Cup team had a good win at the weekend, beating Carlow GC 3-2 in their match.

MEDAL - The first medal competition of the year will be held next week. The competition is sponsored by Oldtown Construction.

ACE - Greg Murphy scored a hole-in-one on the seventh hole of the three-person champagne scramble on Easter Saturday.

CUP - Entry is now open for the Borris Cup matchplay. Sheet is in the men’s locker-room.