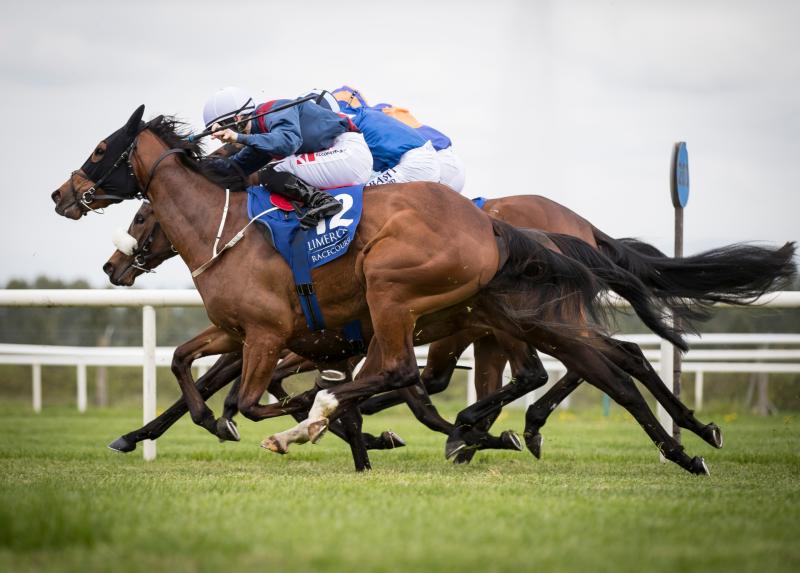 Colin Keane follows up his first race win at Limerick by winning the second, the Irish Stallion Farms EBF Fillies Maiden, on board Mollie The Moo.

A week that began with success in the BoyleSports Irish Grand National at Fairyhouse for Our Duke ended with a high-profile double on the Flat for trainer Jessica Harrington.
Harrington struck twice at Navan on Sunday, sharing both winners with Colm O’Donoghue.
The pair struck first with an 8/1 success for Khukri in the Listed Coolmore Stud Power Stakes, but better was to come as Torcedor saw off Order Of St George to land the Group Three Coolmore Vintage Crop Stakes. Royal Ascot is very much on the cards for the 4/1 winner.
Jim Bolger and Kevin Manning also recorded two winners with 20/1 shot Vociferous Marina taking the Listed Coolmore Stud EBF Salsabil Stakes, while the well-supported favourite Pirolo narrowly won the 13f handicap at odds of 4/1 favourite.
Johnny Murtagh took the opening fillies’ maiden with the Niall McCullagh-ridden 20/1 chance Too Familiar while Ken’s Sam’s was the 10/1 winner of the apprentice handicap for Adrian Joyce and Conor McGovern.
Shane Foley maintained his good run as he landed the 10f handicap on Wingingit, a 9/1 winner at his local track for Noel Meade.
Keane Treble
Colin Keane rode his second treble in less than 24 hours when taking Limerick by storm on Saturday. Having dominated at Dundalk on Friday evening he was quickly back into his stride when the Johnny Murtagh-trained 11/10 favourite True Valour won the 7f maiden.
Keane had two winners from as many races when the Ger Lyons-trained Mollie The Moo won the fillies’ maiden at odds of 8/1. The three-timer was completed when Song Of Namibia took the 11f handicap at odds of 7/1 to complete a double for Lyons.
Shane Foley and Michael Halford shared a double of their own, combining to win the 8f maiden with 13/2 chance Surrounding. They followed up straight away when Shannon Soul, a 10/1 chance, won the handicap over the same distance.
Jessica Harrington and Colm O’Donoghue won the three-year-old 11f handicap with 4/1 favourite Tilly’s Chilli which prevailed by a head. The winning margin was only a short-head in the opening division of the concluding handicap as Bay Hill just prevailed for Christy Roche and Ana O’Brien at odds of 11/2.
The second leg of the same race went to 7/1 chance Dixie Highway, which was ridden for Pat Flynn by Chris Hayes.
Two For Townend
The new season at Kilbeggan kicked off on Friday evening, where the early plaudits went to Paul Townend.
Creative Talent gave the former champion jockey his first winner of the season when taking the 2m maiden hurdle at odds of 5/2 for Andy McNamara. Townend followed up when the 4/1 chance Prince Garyantle won the 3m handicap hurdle in style.
Thurles trainer Pat Doyle combined with Phillip Enright to win the opening 2m3f maiden hurdle with 10/1 chance Hidden Charmer.
The Gordon Elliott-trained Fridaynightlights was an easier winner to find as he landed the 2m handicap hurdle at odds of 11/8 favourite in the hands of amateur rider Anthony Fox.
Elliott doubled up when the Jack Kennedy-trained 100/30 chance Isabella Liberty won the mares’ beginners’ chase.
Dot Love and Aaron Murphy were celebrating a winner at their local track when 9/1 chance Lucky Pat won the handicap chase.
There was a dead-heat at Dundalk on the same evening and against all the odds the judge couldn’t split Lambs Lane and Ben Brody in the bumper.
The former, trained by Philip Rothwell, was a first winner on the racecourse proper for Luke Bleahen while Ben Brody is trained by Sean Byrne and was ridden by his son and namesake.
Blackmore Takes Title
Rachael Blackmore brought her tally for the season to 32 winners and sealed the conditional riders’ championship with a winner at Tipperary on Thursday.
The Killenaule jockey partnered 25/1 outsider Just Call Me to win the 2m4f handicap hurdle for Limerick trainer Andrew McNamara and becomes the first female jockey to win the title.
Only Ruby Walsh has ridden more winners than Jack Kennedy over the course of the National Hunt season and the young Kerryman, who turned 18 on Saturday, partnered his 67th winner of the term on the Tony Martin-trained 4/1 chance Lyreen Lad in the 3m maiden hurdle.
Moyne trainer Tim Doyle combined with J.J. Slevin to take the 2m handicap hurdle with 20/1 chance Ask David while the other jumps race on the card went to Robin Des Foret which won the 2m maiden hurdle at odds of 5/4 favourite for Willie Mullins and his son Patrick.
Aidan O’Brien enjoyed an opening race double with success for the Seamus Heffernan-ridden 9/4 chance Alluringly in the 9f fillies’ maiden and evens favourite Venice Beach, which was ridden to an impressive victory in the 12f maiden by Donnacha O’Brien.
Cody, Godolphin Awards
Kilkenny senior hurling manager Brian Cody will present the trophies at the 2017 Godolphin Stud and Stable Staff Awards at the Newpark Hotel on May 9.
Brian will join MC Richard Forristal, Editor of the Racing Post in Ireland, in front of an audience made up of finalists in each of the 10 categories, their family, work colleagues and representatives of all sectors of the Irish racing and breeding industry.
The most successful inter-county manager of all time, Mr Cody has led Kilkenny to 11 All-Ireland titles.
“I’m acutely aware of how important back-room staff is to all areas of sport and business,” he said. “Kilkenny’s back-room team have been integral in our senior team’s success and continue to play a vital role. The same can be said for those working behind the scenes in racing. Their hard work, dedication and skills have contributed to many Irish racing success stories at home and abroad.”
Diary
Today (Wednesday) - Punchestown (first race 3.40pm). Thursday - Punchestown (3.40pm). Friday - Punchestown (3.40pm). Saturday - Punchestown (2.35pm). Sunday - Gowran Park (2.05pm), Limerick (2.20pm). Monday - Down Royal (1.50pm), Naas (1.40pm). Tuesday - Ballinrobe (4.45pm). Thursday, May 4 - Clonmel (5.20pm).